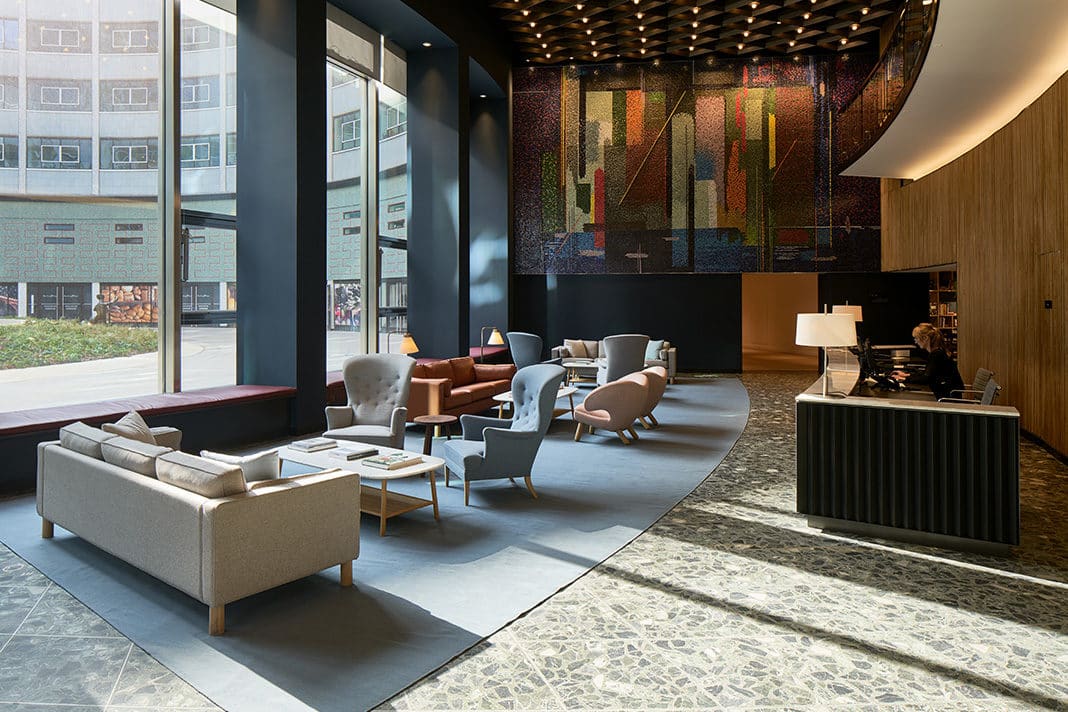 The White City Television Centre development has launched its stylish apartments that reference the building’s past. Absolutely takes a tour

People feel strongly about the Television Centre building in White City. It’s a local landmark and a national icon, having appeared in our living rooms through our televisions for decades. So when it was sold to a property developer, it seemed to many as though a part of our collective identity was at risk. In 2008 Peter Beacham, English Heritage’s heritage protection director, said: “This building is not just architecturally important. As one of the first purpose-built television studios in the world, it represents the moment when Britain led Europe into the television age”, and a year later its Grade II listed status was decided. Fears that this popular structure’s character would be lost in its redevelopment were widespread.

But now that the mixed-use, residential led development has launched, all stylish apartments and a Soho House hotel as well as a new cinema and an imminent outpost of the Royal College of Art, there’s a sense of optimism about the whole thing. The BBC’s legacy is very much celebrated in the sensitive remodelling of the listed site and lots of design details reference its broadcasting past: fonts in public spaces seem familiar and the flats take inspiration from the original mid-century design. 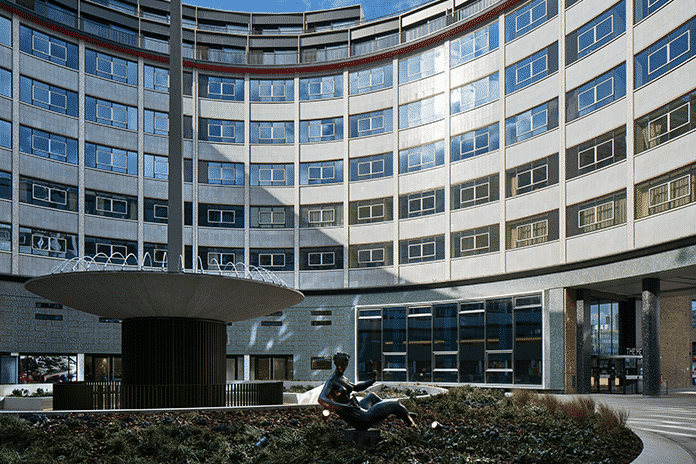 The first residents have now moved into Television Centre and the public is able to access the iconic Helios courtyard and forecourt for the first time. New show apartments are designed by the RIBA Stirling Prize-winning architect Allford Hall Monaghan Morris (AHMM) with interior furnishing by renowned British designer Suzy Hoodless and prices start at £725,000 for a one bedroom apartment. Television Centre’s homes sit in the existing circular Grade-II listed Helios, overlooking the gilded statue of Helios the sun god at its centre, and the newly-built Crescent, with views over a Gillespies-designed private courtyard garden and tranquil vistas across Hammersmith Park. The distinctive residences have taken inspiration from Television Centre’s original mid-century modern design, all sensitively reimagined to provide intelligent and comfortable homes that cater perfectly to contemporary living.

Apartments that face inwards to the inside of the ‘doughnut’ have views of other windows; it’s a bit like Rear Window meets JG Ballard inside a Victorian prison, but in a good way. They’re mostly all sold already, with people apparently selling houses in Holland Park to downsize here. One person reputedly bought his apartment off-plan, choosing a very particular one because it had been his BBC office for many years. 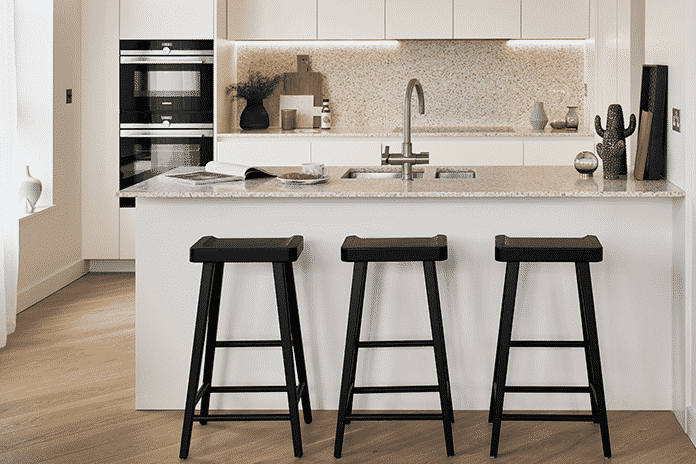 Suzy Hoodless had the idea of creating original designs using archival images and she commissioned a series of textiles from international design studio Vanderhurd. The resulting dhurries take inspiration from Television Centre’s iconic façade, its original broadcasting satellites and the minimalist interiors. The colour palette is evocative of the 1950s when the building was first constructed, and they all feature Television Centre’s famous 26 ‘Atomic Dots’, a Grade II-listed design feature created by architect Arthur Hayes which will is retained as part of theredevelopment.

Vanderhurd’s creative director Christine Van Der Hurd said: “Our designs pay homage to the building’s original use, while contributing to its future.” The specially designed pieces include two 100% silk hand woven dhurries used as wall hangings, one of which depicts the recognisable façade of

Television Centre and the other is inspired by the building’s satellite dishes – all 20 of which were decommissioned, with the last taken down in the summer of 2015. 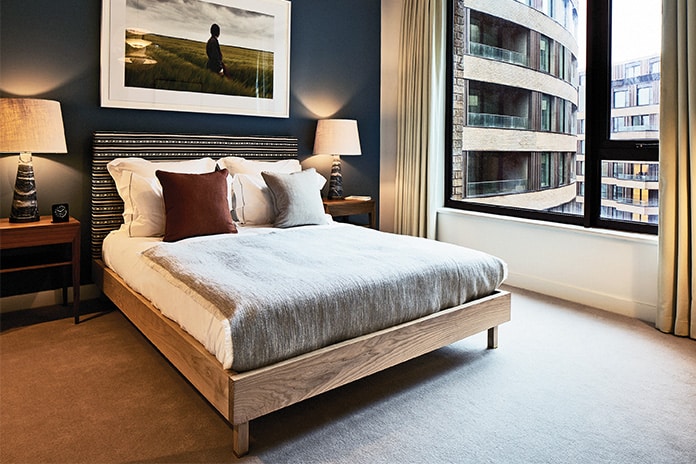 Alistair Shaw, Managing Director of Television Centre, said: “AHMM have created a building that is both respectful to the original and also updates it significantly for the present day, retaining an important BBC presence while opening it up to the city as a whole. At once a home, a place of work and a true destination, we look forward to welcoming all to Television Centre as it relaunches.”

Television Centre is at the heart of a £8 billion ten-year regeneration of the wider White City area, which will form a new hub of activity, creativity and academia in west London. A thriving neighbourhood will see the arrival of new shops, restaurants and educational facilities, as well as the creation of up to 4,000 new homes, over two million square feet of office space and 20,000 new jobs.