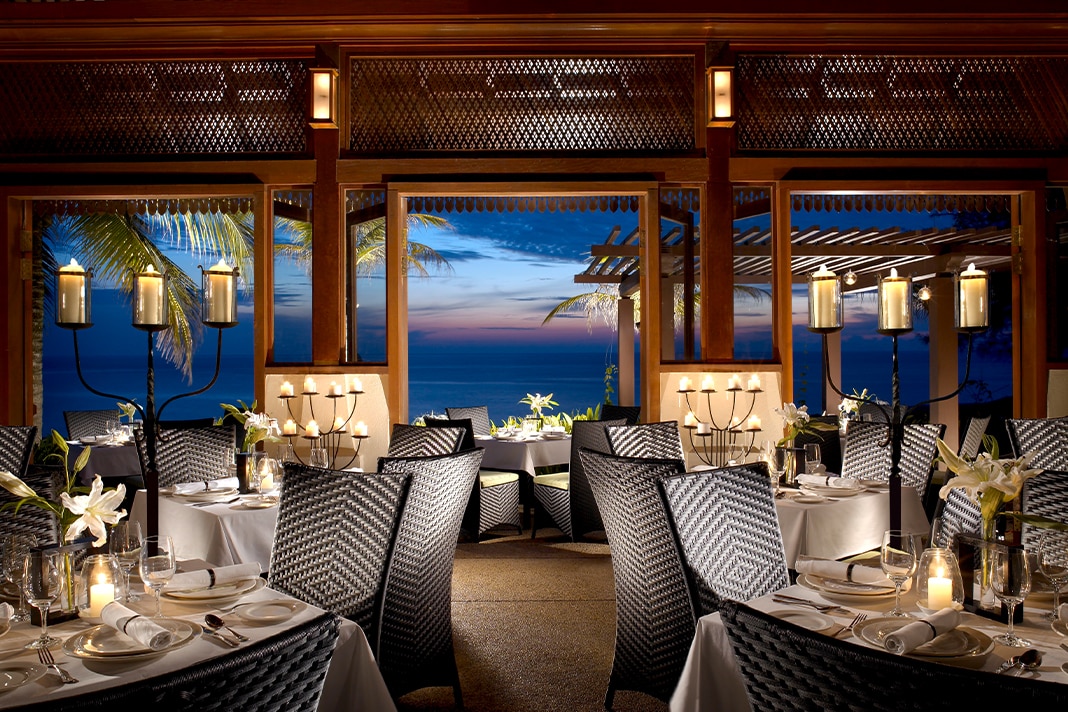 From the historic riverbanks of Malacca to the bright lights of Kuala Lumpur, Malaysia is a feast for all senses. Absolutely London explores the best of a luxury holiday in Malaysia

Never has the term ‘melting pot’ been more accurately applied to a destination than Malaysia. It’s a potpourri of Asian cultures with a muddle of Malay people, Muslims, Chinese, Hindus and other ethnic majorities and minorities, aboriginal groups and indigenous people. Each has its own language and cultural practices which can be appreciated through a delicious variety of cuisines. From the Portugese influences in Malacca to the ocean-fresh sand cooking on the Peninsula’s east coast, the best way to get around is most definitely appetite first.

Where to Stay in Malaysia 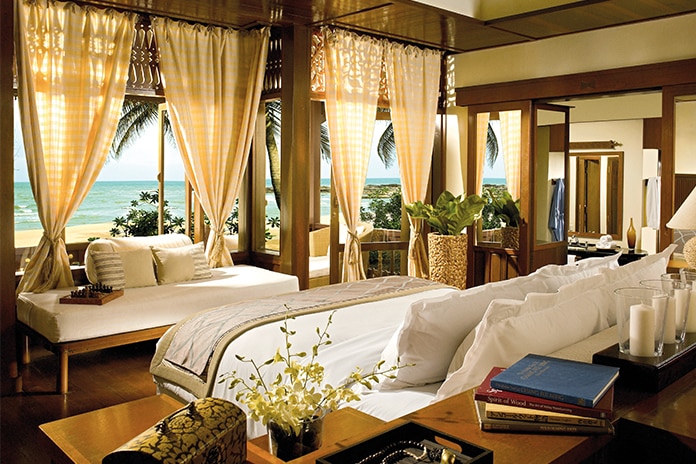 We arrive via Malaysia Airlines into Kuala Lumpur where a transfer whisks us off to our first port-of-call, Tanjong Jara Resort. Located on the pristine east coast of peninsular Malaysia, it’s surrounded by deeply embedded Malay culture. And the resort does its utmost to exhibit this with a designated staff member, the captivating Captain Mokh, tasked with giving guests an experience that is rich in age-old Malay traditions. He’s behind everything from the ancient practises that can be enjoyed in the spa village to the Taste of Terengganu event which takes centre stage in the gardens. This weekly happening invites locals to show off crafts and culinary specialties to the hotel guests. From the freshly pulled teh tarik tea to hot apam balik pancakes, the batik painting workshop and the traditional games, it offers a wonderful taste of village life in Terengganu.

The icing on Malaysia’s cake is the chance to encounter wildlife in its natural habitat. The most common sightings will be insects or colourful birdlife, but you could get lucky and spot a snake or a silvered leaf monkey. Guests of Tanjong Jara can get up close and personal with it all on a walk through the jungle surrounding the resort. Accompanied by Captain Mokh, who is clued up on a mind-boggling variety of biodiversity, this gentle walk includes a tour of the Malay herbal garden and a gentle climb up the steps of Jara Hill for a panoramic view of the coastline. 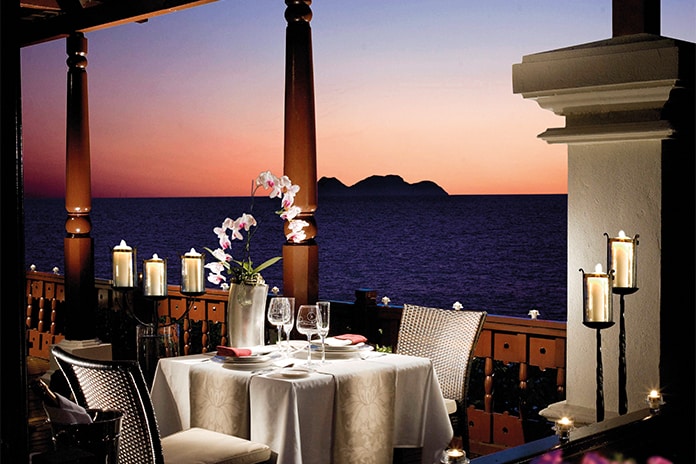 Captain Mokh is also behind installing many elements of culinary intrigue such as the age-old east coast tradition of sand cooking, also known as Bakar Ikan Bawah Pasir. This beach-side dining experience showcases the unique culinary style of Terengganu fishermen, cooking fresh seafood wrapped in banana leaves by burying them in sand and coconut husks over a charcoal fire.

Elsewhere, the resort does have actual ovens too, overseen by the infectiously cheery chef Ann, who serves a variety of Asian and western selections for breakfast and lunch in Nelayan restaurant, while seafood features heavily for dinner. She also commands a brigade of menu masters, experts in local cuisine, who will put on a superb feast using the freshest of ingredients from that morning’s market run. Guests take a seat at a menu-less table and are served whatever chef deems they’ll enjoy most from the produce available and the kitchen’s repertoire of typically Malay cuisine. We enjoy a whole red snapper, a comforting bowl of prawns cooked in coconut milk and a tangy beef rendang. 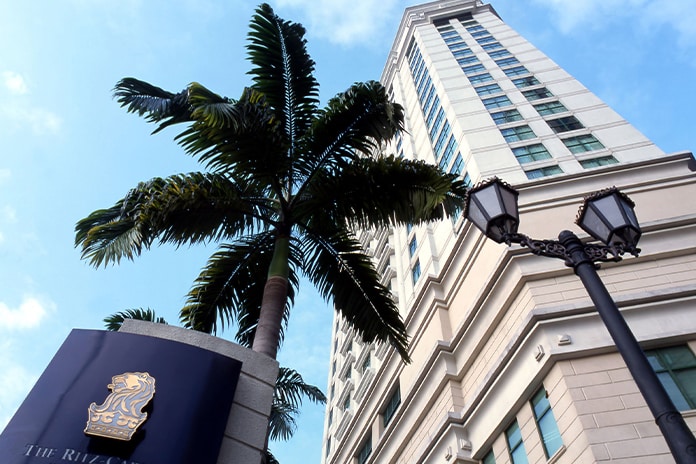 From the actual jungle to the dense urban jungle that is Malaysia’s capital, our trip takes us back to Kuala Lumpur where we check into The Ritz Carlton. The iconic hotel brand has snapped up an enviable location with this one, just steps away from the skyscrapers of the city’s Golden Triangle and a 20-minute walk from the Petronas Towers. It’s an ideal base for exploring the capital that is a seeming contradiction between old and new. Gleaming 21st-century towers stand cheek-to-cheek with colonial shophouses and green spaces, while shoppers shuttle from traditional wet markets to air-conditioned super malls. Here, there and everywhere are staples of Malaysian society and culture that continue to underpin this advanced metropolis.

A visit to Lot 10 Hutong is a must for serious gourmands. This giant subterranean food hall pays tribute to local delicacies with each of the 33 eateries distinguishable for a different regional dish. Expect some of the best dim sum, roast duck and beef noodles in the country, not least the capital. 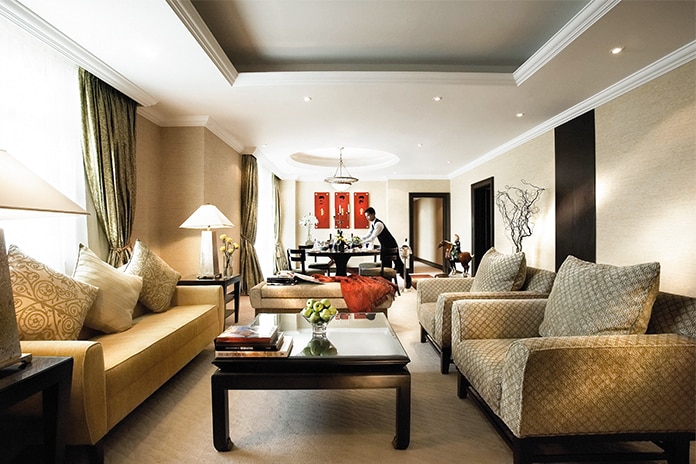 Back at The Ritz Carlton, the culinary offering runs the gamut from an unmatched breakfast buffet and quintessential afternoon tea to fine dining at The Library and a lively Sunday roast. Dinner in the Library is a particularly lovely affair: meticulously presented plate after plate forms the tasting menu, showcasing a spectacularly refined rendition of Malaysian cooking we’d yet to experience on the trip. The kitchen team take classic Malaysian ingredients and tend to them with French flair to create dishes such as lightly seared bonito fish with soy jelly and freshly grated wasabi, and mille feuille with a yam filling. 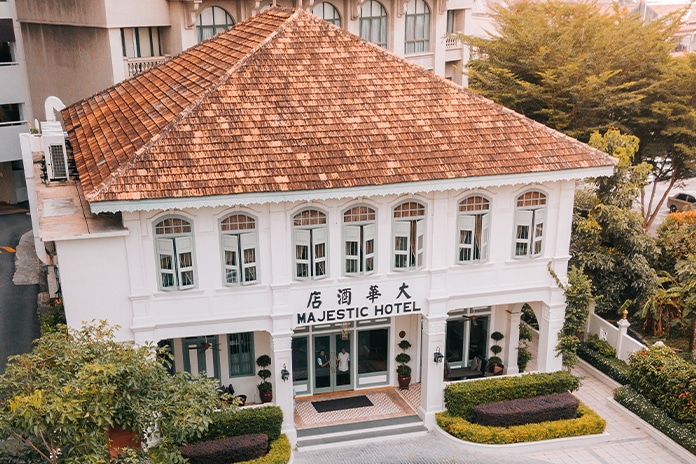 A visit to Unesco World Heritage site, Malacca will throw up yet more European influence. Founded in 1400, this port on the west coast of the Malay Peninsula established independent relations with China and dominated the straits to control the China-India maritime trade. Over time, the port adopted Islam and was a catalyst in the rapid spreading of the religion throughout Malaysia. This thriving port represented a golden age of self-rule, creating a matrix for modern day Malay culture —a blend of indigenous Malay and imported Indian and Islamic elements.

Then, with the intrusion of the European colonial powers, Malacca underwent Portugese, Dutch and British rule, the influences of which are still present today. Every turn in this tiny town has a point of interest: wall murals, coloured archways, eccentric tiling, mosaic flooring or quirky window shutters. Each street is lined with a random assortment of shops selling everything from woven furniture and ceramics to fresh coconuts and Chinese lanterns. Buildings – no two share the same design – sit side by side like rows of cramped teeth; a grand Chinese temple next to a Dutch clog shop next to a Portugese bakery next to a Malaysian flower shop.

A short stroll from this Liberace dreamscape is the Majestic Malacca hotel. It sits on its namesake river, which once teemed with Chinese junks and spice-laden vessels. A relic of grandeur, this restored 1920s mansion is an exemplar of heritage architecture with porcelain tile flooring and teakwood fittings. 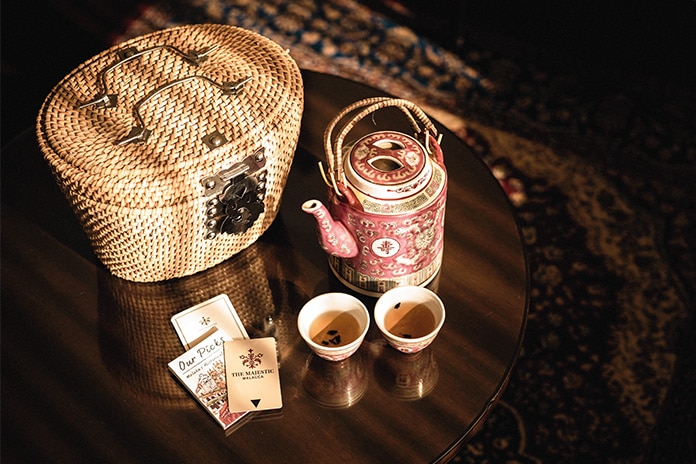 All meals are taken in the hotel’s restaurant, The Mansion, overlooking the river. For breakfast and lunch it’s a variety of dishes based on the Malaccan cultural heritage known as Kristang – fiery sambals, comforting stews and fragrant coconut curries – while dinner is the perfect opportunity to try the hotel’s gin pairing menu. Stuffed squid is expertly paired with a silky clover club cocktail, spiced lamb is matched with a delicious chocolate negroni, and a lemon polenta cake tastes divine with the gin espresso martini that has been given a citrus twist.

To see the chefs work their magic in person, book yourself onto a private cooking class. A kitchen station is set up outside and we’re taught how to whip up a spicy prawn curry and a fragrant aubergine side, which we enjoy later for lunch in the restaurant.

Our last culinary stop off is the Majestic Malacca’s famous afternoon tea. Served in the hotel’s gorgeous Colonial-style lounge, we fill up on Peranakan treats, characterised by their complex, labour intensive methods, and British tea time classics, which serve very well to induce a contented food coma for the flight home.

Malaysia Airlines flies twice daily direct between London and Kuala Lumpur onboard the new Airbus A350 and onwards to the rest of Malaysia. Book via any Malaysia Airlines participating travel agent or visit malaysiaairlines.com

Like this? Check out Absolutely London’s guide to Berlin