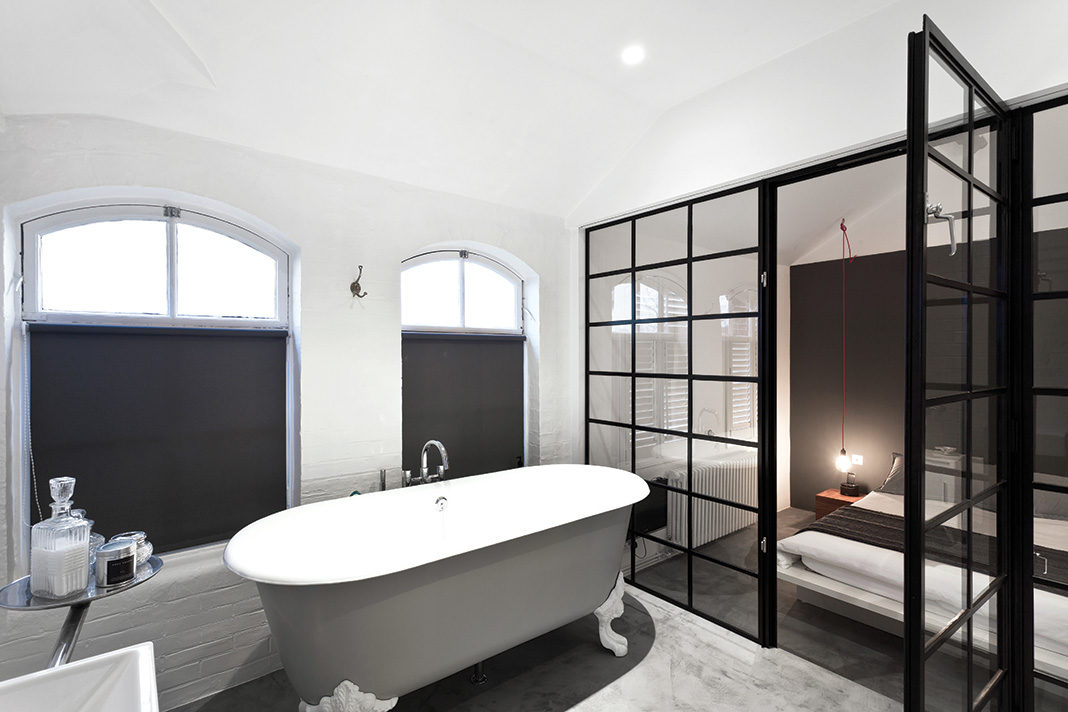 When Julia Feix moved into her apartment in a converted school in Elephant and Castle, complete with attendant beautiful proportions, she knew that she’d have her work cut out. “It was pretty grim,” she explains. “The previous owner had bought the flat as a shell and did the fit out himself. It was a pretty bad DIY job.” And of no room was this truer than the bathroom. “It was all green slate tiles and some faux-Victorian fittings. All in all, it was a bit odd. So the brief from my client (my wife, Emma) was an ‘industrial chic home’ – whatever that might be.”

Happily Julia – along with Tarek Merlin, co–principals of their Peckham-based architectural firm, Feix and Merlin – was more than equal to the task. “We wanted to achieve an industrial look that didn’t feel at odds with the Victorian heritage of the building,” she says. “The result is a careful balance of industrial finishes, like the concrete floor and the steel/glass partition with more traditional fittings like a roll-top bath, ornate radiator and exposed riser/shower head. The fully glazed partition took a little convincing and the compromise was the installation of a curtain track along the partition, which – funnily enough – has not been used to date.”

The duo chose elegant yet gratifyingly industrial Crittall windows as a partition to visually join the two spaces between the bathroom and the bedroom; hid all the plumbing in the floor build-up (you step up into the bathroom); and then finished the whole scheme in a palette of varying shades of elegant grey. “I’m a huge fan of grey,” says Julia. “You just don’t get tired of it. In fact, there are a couple of red highlights in the bedroom: the fabric cables of the pendants. And those are the bits I’d most like to change now,” she laughs. It was she says, a pleasure to be her own client, together with Emma. “It’s always fun doing things for yourself, and thankfully we both have similar tastes so it doesn’t usually create any problems. I also like to experiment with new ideas in our own apartment and then use the outcome on other projects.”

The taps, the flooring and the partition were, she explains, the most expensive elements of the scheme, and she advises anyone working on their bathrooms never to scrimp on the detail. “Always spend money on taps,” she says. “The things you touch every day need to be of the highest quality. Save money on tiles – ceramic and porcelain is hardwearing stuff, you can afford to spend less here without compromising on quality. Taste is of course a different matter…”

As far as Julia and Tarek are concerned, their taste has never been called into question. The pair met while working for Will Alsop, where they both stayed for over a decade. It was there that they launched their own eponymous practice, which started – entirely in keeping with their outlook and style – as a bit of fun.

“We entered a competition together just for the hell of it. The brief was to design a café at the end of Deal pier. We got shortlisted and didn’t win (Niall McLaughlin did) but we came out of it having realised that we work really well together. We won the second competition we entered, one of four commissions to build the “beach hut of the 21st-century” and ours was opened 10 months later. That was the start of Feix & Merlin. We both have a similar approach to design and our tastes overlap enough to allow us to always find a solution we both love, while at the same time creating enough friction to make the design process interesting and productive.”

It may have been just for fun, but that nascent foray into launching their own studio paid dividends in barely any time at all; since they started, they have been nominated as Young Architects of the Year, an accolade they were “excited and honoured” to receive.

It’s not hard to fathom why they garnered such positive attention. It is, above all, Feix & Merlin’s unbridled joie de vivre that is the consistent thread that ties all their disparate work together. “We have been told that we are not like other architects, in that we design from the inside out, rather than from the outside in,” says Julia. “It’s where you live, it’s where you work, and where you play. We are interested in people’s lives and experiences and how, together, we can make them better.”

At present, they are working on a boxing gym; a private member’s club; the refurbishment and fit-out of a run of railway arches in Hackney (Henry Holland will likely be an occupant of one) and various private residential schemes. Their schedule is, then, near-dizzyingly busy and that’s just how they like it. As Julia explains, they would take on even more were it not for an insidious culture of caution that has crept into contemporary architecture. “Clients have become very risk-averse which, for small practices (read young architects), translates into a very real problem. Clients are often advised by their project managers or financiers to go with a safe pair of hands (read a grey beard) rather than to ‘risk your money’ with a young practice that might not have built a 10-storey tower, an airport, a museum, a school before. So small practices get stuck on a certain type of project size until they get ‘a break’ which allows them to leap to the next step on the ladder… that break gets harder and harder to find.”

The duo considers much of their early work experience to have been formative. “Will Alsop taught me so much about the importance of telling a great story and not taking yourself too seriously,” she says. Although she equivocates about naming her favourite buildings – “Oh, I don’t think there is such a thing”  – she professes to be a “huge fan of Oscar Niemeyer, and I love the work of Marcio Kogan and his StudioMK27 in Brazil.” There is a theme – or several, in fact: a sultry kind of elegance, certainly. What would be her dream project? She doesn’t miss a beat. “A beach house on a stunning coastline, please.” Sophisticate beach types take note: no one would do it better.