Home Home My Modern House: Restaurateur Mark Hix Gives Us A Tour of His... 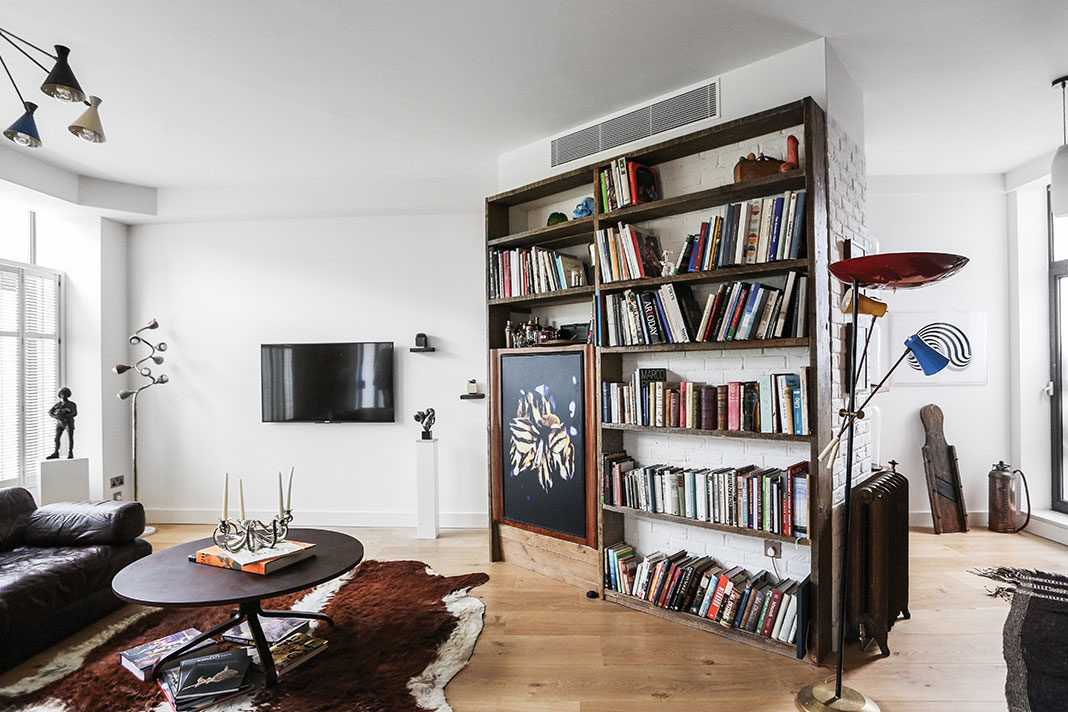 Mark Hix shows us around his newly refurbished live/work apartment in Bermondsey, showing us all the cool, repurposed pieces that make it unique

I lived in Shoreditch for 20-odd years, as well as Notting Hill, and I wasn’t considering south London before I bought this place. My friend Richard, who’s a search agent, showed it to me on The Modern House website, and I zipped straight over on my scooter to take a look. I said yes straight away. I didn’t even come for a second viewing because I knew I was going to redo it.

Space was the main consideration, but I’ve found that Bermondsey is a really interesting area. It’s also easy to get to any of my restaurants… I nip over London Bridge to get to the Oyster & Chop House. I’m close to lots of bridges here! I visit at least two of my restaurants every day. I’m not really in the kitchen any more; I’ve got lots of other things to look at, mostly overseeing the creative side.

This place is my home, and I also do some work from here: writing and experimenting. I might start doing some cookery demonstrations, like I do in my Kitchen Library at the Tramshed.

I worked with Tekne on the refurbishment. Originally they’re shop fitters, but they’ve fallen into doing hotels and restaurants. They did my Bankside restaurant, Hixter, and the one in Soho. I recently put them in touch with my friend Robin Hutson, who owns The Pig Hotels, so they’ve done the last two projects for him. When Robin buys old buildings for the hotels he clears them out, and he’s given me a few salvaged things for the flat – a shower and some old Crapper loos.

I designed the space, and then Tekne worked as the contractors and architects. I gave them the ideas, and they put it all on paper. We gutted the whole thing, taking it right back to the bare bricks. We played around with materials: the wine racks are made out of scaffold planks picked up from building sites around here – some we paid for and others we were given for nothing. The same with the bookcase. Because they’re old, they’ve got a bit of character.

The kitchen counter is made from liquid metal. You can pour it over MDF to create curves at the edges, and you don’t get joins. Underneath are pieces of cast concrete from Retrouvius; I think they were originally columns in a mid-century office block. I wanted simple, natural oak units, something that would wear in naturally. Cooker hoods are normally so boring, so we went to a foundry and made a semi-industrial-looking unit that’s wrapped over the top of a normal extractor. We went back to the natural brick on the wall behind, which would have been the end wall of the original factory.

The spoon on the wall is a Michael Craig Martin – it’s the cover of one of my books, The Collection. The ‘Vacancies’ neon piece is a Peter Saville art piece that he made. The fridge came from an antiques shop in Paris. It was made in the 1800s – originally they would have put a block of ice in the middle compartment to keep the whole thing cold. The refrigeration guy that I use for my restaurants converted it and made the top bit to match the bottom. It’s got different sections: dairy, wine, glasses, negroni cabinet!

I buy a lot of stuff from junk shops and reclamation yards. The kitchen lights are from Trainspotters in Gloucestershire, and I’ve collected midcentury Stilnovo lights over the years.

I bought the cocktail cabinet years ago at the Paul Smith shop. It had a horrible Chinese painting on the front, so I got my artist friend Mat Collishaw to make a replacement. The taxidermy mice in bell jars are by Polly Morgan, and the Bridget Riley is one of the first pieces I ever bought. There’s a shop across the road – a sort of Lithuanian shop – and they were selling what I thought was a mandolin, but I couldn’t work out why it was so big; it turns out it dates from 1903 and was used for slicing white cabbage.

The guitar comes from an event in Lyme Regis called Guitars on the Beach. A friend of mine said, ‘If I get a Fender guitar sponsored, can you ask Tracey Emin to draw on it?’, and she did. I thought it was going to be a silent auction, but it ended up being a raffle at a pound a ticket. So I bought a thousand tickets for £1,000 to narrow the chances down! It’s signed by Paul McCartney as well. I go back to Lyme Regis maybe three weekends a month. I’m part of the local community, I suppose. I get involved in local charity work and I do a food festival, which brings quite a few people to the area.

I made the garden room because the little terrace is quite small. In the summer you can open the doors up and feel like you’re inside and outside. I put the bi-fold doors in, and then got lots of crazy plants from Covent Garden. It’s a nice place to have tea in the morning. I found the old plantation chair on eBay. The artwork is by my mate Henry Hudson, who works in plasticine. That’s an Australian Moreton Bay Bug [on the ceiling]: it’s a sort of prehistoric crab. Then this is an old python skin I found rolled up in a box in a junk shop. I guess there’s a touch of the macabre, but really I just thought this room was crazy enough that you could put anything in it.

I’ve got a fishing and shooting cupboard here. The wallpaper is by one of the guys who works in the gallery, Tom Maryniak; he’s done a few different types of wallpaper in the loos at my Bankside restaurant. And then the wallpaper in the main bathroom is by Jake and Dinos Chapman.

The photographs above the bed are by Susannah Horowitz – she was one of the winners of the Hix Award. Every time we do the award I end up buying something. And this one isn’t from the Hix Award: it’s just two fucking flamingos with a little bird watching… I forget what its name is! The rooflight was already here; it was quite a weird space before, with a pool table and not much else.”

I guess it’s whatever you want it to be. I like to blend mid-century stuff with scaffold planks and a bit of new. I used to live in a traditional four-storey house in Notting Hill: with a kid you end up running up and down stairs all the time. It is just so much easier to have everything on one floor. If you forget something in the bedroom, you don’t have to go up two flights of stairs to get it. I’ve had a couple of dinner parties here. It’s great when you’ve got friends round and you’re cooking in the same space, rather than diving off to the kitchen to slurp wine.”

If you were to move, what’s the first thing you’d take with you?

I’ve got a house down in Dorset, near my restaurant there, which is one of those Scandi lodges that you can just pick up and move. I’ve had it for nine years, and got planning permission to rebuild on that space, which is directly overlooking the sea. I’m going to move the lodge to a friend’s land and rent it out, and then build a two-storey wooden house. That’ll be my next project, starting in October. But I’ll probably just leave this flat as it is and start collecting more stuff. I’ve already got a lot in storage, particularly lights, which I often get from the Paul Smith shop in Mayfair.”

Which property on The Modern House website has particularly caught your eye over the years?

The converted barn in Assington, and also The Gasworks in Gloucestershire. I like the idea of something that’s reusing an industrial building. It’s amazing how much space you can get for the same price outside of London.”