Home Home The Daily Grind: A Pepper Mill from Architect Will Alsop 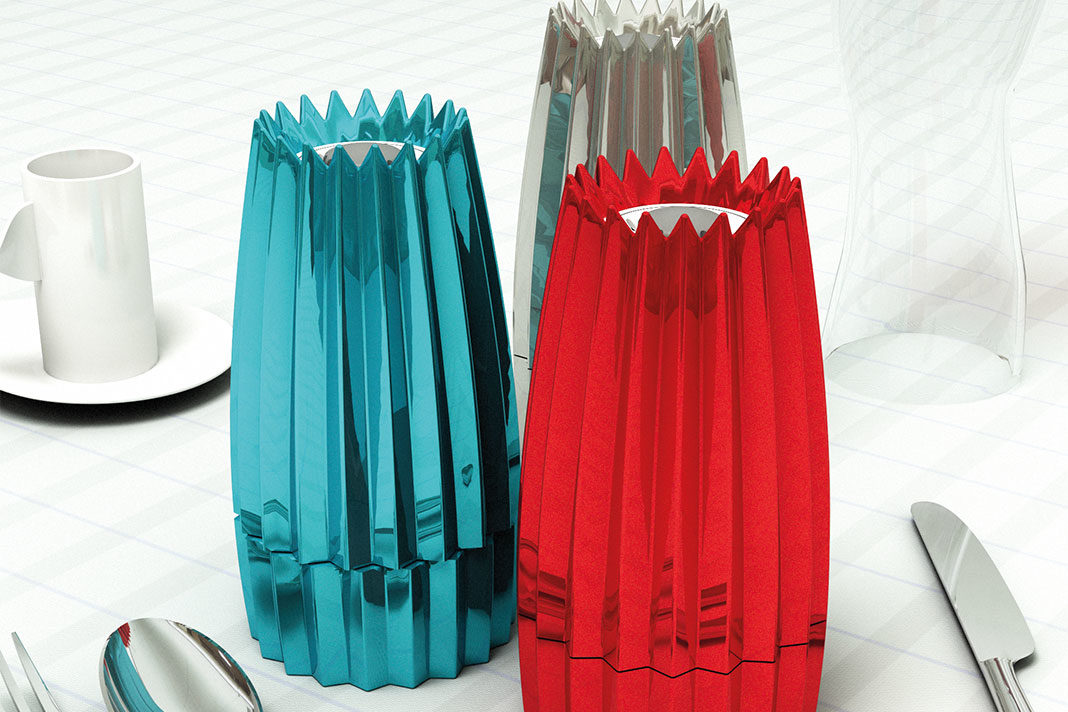 Will Alsop is taking his designs to a smaller scale. The award-winning architect discusses his new project – a pepper mill for Alessi

An Unlikely New Project for Architect Will Alsop

“From teaspoon to city” reads the mission statement on aLL Design’s website, the architecture practice led by Stirling Award-winning principal, Will Alsop. As a tagline of sorts, it couldn’t better summarized than with a brief glance at his current dizzying roster of projects. “At one end of the spectrum, we’re working on a series of a hundred new mid-sized towns in China,” he explains airily, as if the creation from scratch of a century of conurbations was the de rigueur stuff of a quiet week. “At entirely the other end, I have a set of new salt and pepper mills about to launch.”

We’re here to talk about the latter – titled ‘Grind’ – which is on the brink of being unveiled by Italian product powerhouse, Alessi. Created in collaboration with the Bologna-based architect Federico Grazzini, whom Will Alsop credits with having a brilliant knack for refining their collective objets, Grind comprises a pair of silver and black mills, at once industrial and refined. They represent the latest in a line of creations produced under Alessi’s auspices over the last decade, ranging from the teaspoon of the tagline (all fluid spiralling sleek silver) to ‘Daytimer’, a characteristically spirited wrist watch in a rainbow of eye-popping colours entirely in keeping with the wider Alsopian oeuvre. It’s a partnership that has brought much in the way of creative satisfaction and which, crucially for Alsop, comes with few imaginative constraints. “It started when Alberto Alessi, who is the grandson of the man who founded the company, sent me an invitation to design a limited-edition tea set – only 99 exist and all of them were sold. After that, my wife and I went to the Alessi factory at Crusinallo in Piedmont, which is where all products have been made since the 1920s when it was founded. I saw what they have and what sort of products they’re able to make. What I like is that Alberto might just send you a little prompt to say, ‘Perhaps you might like to start thinking about a design for a salt and pepper’ – but in reality, you can do what you like, so long as the factory can make the design.”

Alsop’s name has been built on the unbounded nature of his imagination; his is a philosophy that dictates that daring to dream is fundamental to change. Given the sheer scale of his, at-times, improbably inventive work that takes in international cruise terminals-come-office-come-shopping centres in Shanghai and art schools on stilts in Toronto, I wonder what it’s like to scale down the design process for something that you can hold in your hand. “It’s the same,” he reflects. “Whatever you’re doing, you’re always looking for the thing that makes it more useful, more beautiful and more relevant.”

In the case of the salt and pepper, on two things he was adamant: firstly, he knew that he wanted to make something weighty: “It had to have a certain gravity – it’s like the difference between using a heavy knife and fork and a plastic set. I knew it should be something beautiful to look at, so the general form is like a bulbous onion, stretched up with ridges that make it easy to grip. Eating at its best, after all, should have a sense of occasion about it.” Secondly, it should do the job better. “There are a lot of salt and pepper mills on the market. Some work well, others don’t. But the thing they all do is to leave a residue of pepper or salt on the table. It really annoys me. So we decided to make our mill face upwards; you turn the base of the form, so you don’t get any irritating deposit on the table.”

Will Alsop is, in many ways, a man of great contradictions. His work, more than any other architect, is like art made flesh, its organic fluidity, its unreserved use of colour and its often amorphous forms ­– which often seem like characters that have wandered out of his head – delighting and perplexing onlookers in equal measure. Indeed, his starting point for every building is on the canvas (a skill recognised in his status as a Royal Academician) – and as such, his outward appearance is more akin to that of painter-emerging-from-studio than the caricature of the meticulous, polo-necked bespectacled architect. His shoes bear the relics of his last explorations with the brushes, paint spatters decorating them like a Jackson Pollock and his untucked shirts reveal a man relaxed and unfettered by finicky notions of sartorial neatness. And yet in his environment, he is fastidious. A glance at his desk tells its own tale; empty, save a couple of Mont Blanc pens, pristine and everything at right angles. This perhaps unexpected need for order does find expression in the occasional building too; his Palestra office block at Southwark, for example, confounds expectation by being reserved and demure in its use of colour. It’s an exacting attitude that even Alberto Alessi has been subjected to. “At the factory, Alberto has this wonderful, elongated oval table that must be about six metres long. It’s full of interesting things; note pads and pens, products, prototypes. I said to him once: ‘Alberto, your desk is really interesting. And also really untidy.’ He said: ‘Ah yes, every six months I empty it, it’s all cleared away. But then I like to let it build up again.’ I liked that he was so inspired by these things, these remnants of conversations he’s had with so many people over the last six months.”

Beyond salt and pepper, Will Alsop, along with his design studio based on the top floor of a building in Bethnal Green (complete with roof terrace for growing vegetables, drinking and smoking), is working on an art park in China, large mixed-used developments in both Manchester and Brentford and three houses on the south coast. And then there are those hundred towns. “The central government in China decided that they wanted 1000 new sustainable towns – nothing too big, because cities in China tend to be huge and the idea here is to give people options about where and how they live and to allow them to appreciate the rural.” Given that his architectural manifesto – if he had such a thing – would be littered with the word ‘joy’ and his insistence that we should be active in making more time for it in our lives, he seems just the man to deliver a cultural revolution of delight.