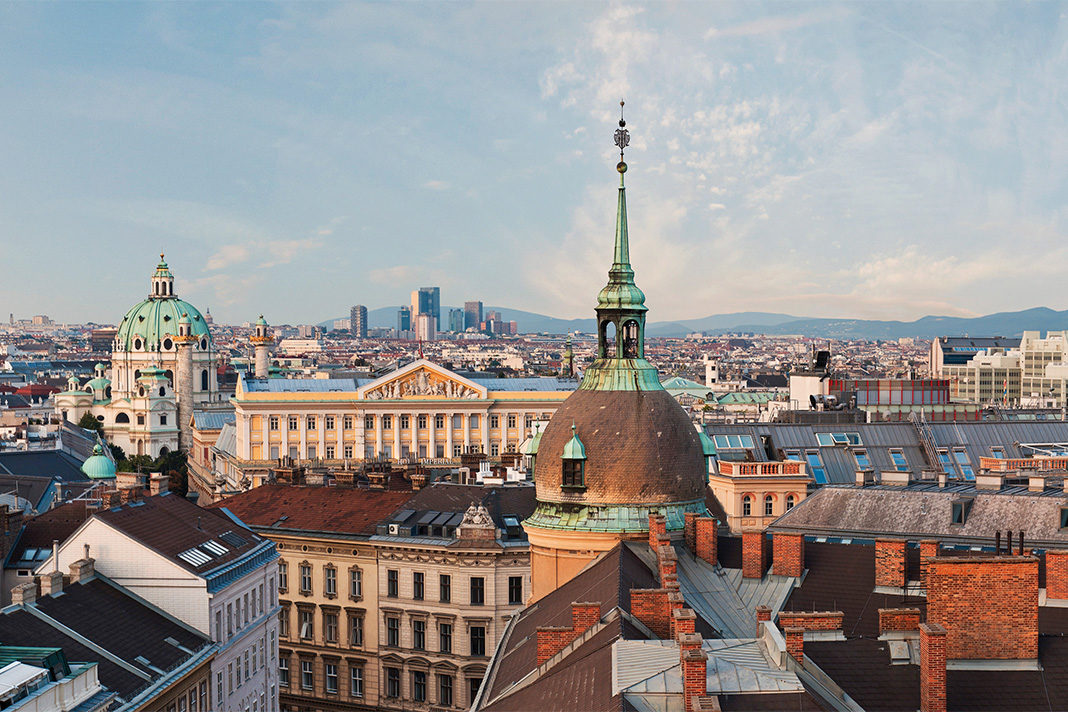 One of the world’s most culturally significant cities, Vienna’s artistic and intellectual legacy is legendary. In terms of European city breaks, Austria’s capital is the crème de la crème

On the Danube in the east of Austria and characterised by Romanesque and Baroque architecture, Vienna has a well-deserved reputation as one of Europe’s most beautiful cities. Musically iconic, the roster of famous historical residents includes Mozart, Beethoven, and Strauss, who once entertained guests at the renowned Viennese balls. Today, Vienna remains the last capital to truly keep alive the tradition of the 19th century ball, holding over four hundred a year; an enchanting evening for those fortunate enough to attend.

World class museums display works by masters of painting such as Gustav Klimt and Egon Schiele, and the city’s numerous palaces continue to enrapture visitors in their magnificence. For rich history and even richer culture, Vienna is the ultimate city break.

Designed by architect Theophil Hansen, the Palais Hansen is a resplendent neo-classical building in a calmer part of the Ringstrasse (centre of Vienna). The quiet setting in no way detracts from convenience – most cultural attractions of note remain walkable and are just a few minutes in a taxi.

The hotel’s imposing façade was unaltered during the Kempinski renovations, but interiors have become a gleaming ode to marbleised luxury. A stylish central lobby lounge is surrounded by the hotel’s various social and dining spaces: Michelin starred restaurant Edvard, the more informal Die Kuche that serves Austrian classics and the hotel’s breakfast (until 2pm on weekends), a piano bar, and a cigar lounge (where smoking indoors is permitted). The hotel also has a spa complete with saunas, a small relaxation pool, and a fully equipped gym.

98 rooms and 54 suites are all of generous proportions with high ceilings. Most have balcony access offering views of typically Viennese architecture. The rooms are copiously accented with elegant wood veneer, and feature state of the art technology. Showers and bathtubs are controlled with button interfaces that allow guests to pick the exact water temperature. For a classically modern stay in Vienna, the Palais Hansen is ideal.

The most famous place to stay in Vienna, Hotel Sacher offers old-world splendour in spades. This hotel defines Viennese culture; it is just around the corner from the State Opera House and the Albertina Museum, and is namesake for the world’s most famous chocolate cake – Sachertorte.

Bedrooms are smaller than in more modern hotels, but offer stately grandeur to those with an appreciation for 18th and 19th century tastes. The hotel’s dining options include a main restaurant named after historical matriarch Anna Sacher, the Rote Bar & Restaurant, Café Sacher, and The Blaue Bar.

A thoroughly modern grand hotel, Palais Coburg blends boutique size with gilded opulence. The hotel is in an interiors league of its own; downstairs (which includes the entryway and subterranean banqueting areas) is converted from the medieval cellars, while upstairs is done in palatial aristocratic taste. The hotel’s bedrooms vary in decor. Some are modern with classical Viennese flourishes, while the best suites are near replicas of Louis Phillipe XVI style. The hotel features 2 Michelin starred Silvio Nickol restaurant, a more casual all day restaurant Clementine, and a full service spa.

Vienna’s Sofitel is the most contemporary choice on our list. Designed in shades of dove grey, white, and black, the minimalist hotel occupies a tall office-block style building right on the banks of the Danube. Because of its height it offers probably the best views over Vienna of any hotel in the city – wonderful vistas of the Stephansdom Cathedral are from where the hotel takes its name. Bedrooms lack traditional Viennese style, but are comfortable, sleek, and sexy. The hotel’s breakfast is also noted for being one of the best in town.

Michelin starred Filippou is a foodie’s paradise; a meal here is nothing short of a culinary adventure.  Minimalist décor is the perfect backdrop for the kitchen’s dazzling creations. When we visited Konstantin was in the house making sure every diner’s dish leaving the kitchen was pitch perfect. The restaurant serves a three course business lunch which is a steal at thirty-something euros, but if possible, you should opt for one of the tasting menus. They come in 4 or six course versions, with a choice for the meat used in the main course. Starters are glorious; we had brandade with Grull caviar, a signature dish of Norwegian Langoustine with calf tongue, and Breton truffled lobster. All were sensational. Konstantin Filippou offers fine dining with flair, one certainly not to be missed.

Edvard’s tagline is “Fresh Cuisine”, and flavour combinations here are certainly excitingly fresh. The restaurant makes the best of Austrian produce and unfamiliar ingredients; dishes we ate included Sot-l’y-laisse (chicken oysters) with spinach puree and Alba truffle, tartare of veal, and a dessert of Isabella grapes three ways. Think about how rarely the humble grape gets to be anything other than a cheese accompaniment or wine in fine dining – this course let sweetness stand on its own. Sophistication is the key word in terms of décor with elegant shades of ivory, black, and pale green complimented by daring contemporary art. The culinary team’s efforts have been awarded with a Michelin star and 16 Gault Millau points.

On the 18th floor of the Sofitel, Das Loft offers unparalleled views over the Vienna skyline through floor to ceiling glass walls. Grey swivel armchairs allow diners to twist themselves to face the views, an excellently thought out design feature. Vividly colourful ceiling panels are illuminated at night and visible from outside. They have become an easily recognised landmark against the night sky for pedestrians and those passing the hotel along roads lining the Danube. The restaurant has an accomplished international menu, with highlights including a truffle tagliatelle, Breton ray with gnocchi, and an excellent venison main course. The restaurant also serves the Sofitel’s breakfast, considered one of the best in Vienna. A raised bar is a popular spot for locals catching up after work.

Hotel Sacher’s less formal but more popular restaurant the Rote Bar is an intimate space with shimmering scarlet wallpaper and gilt framed oil paintings. At only a dozen or so tables, the restaurant serves classical Austrian food such as Wienerschnitzel with parsley potatoes, boiled beef with rosti, consommé with dumplings, and of course the hotel’s famous Sachertorte. Perfect for romantic lunches and dinners, Rote Bar offers the same traditional appeal as in the rest of the hotel. Popular with locals and tourists alike, early weekend booking is essential.

The Belvedere consists of two Baroque palaces, and was originally built as a summer residence for Prince Eugene of Savoy. Today it is a fabulous museum complex, separated into distinct areas of interest. Inside find classical Austrian art and original 18th century frescoes alongside modern masterpieces such as Gustav Klimt’s The Kiss.

Holding one of Vienna’s principal collections of modern art, the Leopold is the go to museum for Gustav Klimt and Egon Schiele. Its Schiele collection is the largest in the world. Regular exhibitions schedules provide a broad mix of art and artefact; when we visited one of the lower levels had been dedicated to ethnographic material from Africa.

Directly across from the Leopold, MUMOK (Museum Moderner Kunst) is Vienna’s centre for contemporary art. The strikingly modern, volcanic rock encased building looks after everything from contemporary Viennese art to modern masterpieces by the likes of Giacometti, Lichtenstein, Gerhard Richter, Picasso, and countless others.

Located in the Innere Stadt, The Albertina holds one of the world’s most comprehensive print rooms. Around 65,000 drawings and over a million old master prints are archived at the museum. There’s also a significant collection of Impressionist and 20th century art alongside regularly changing temporary exhibitions.

Considered the jewel in the crown of Austria’s museums, the Kunsthistorisches is a historical art museum housed in an awe-inspiring palace on the Ringstrasse. They have comprehensive collections of old master paintings, modern Austrian art, and artefact from the Egyptian, Greek, and Roman worlds. Visitors come for the palace’s interiors as much as the art on display.

Built during the mid-19th century in a neo-Renaissance style, the Wiener Staatsoper is one of the world’s most famous opera houses. It is also one of the busiest – today the Vienna State Opera company produces over 50 operas a year and several ballets. The famous Viennese Opera Balls are hosted here, glitzy occasions that demand the donning of White Tie; the most formal style of civilian clothing and an altogether increasingly uncommon dress code. The building’s foyer is fashioned entirely from carved stone, while the theatre is widely considered one of the most beautiful there is. While in Vienna we managed to catch a ballet production – it was a dream of an evening. If you can get tickets to a production, do. Having dinner afterwards at a grand café/coffee house makes for a quintessentially Viennese night out.

Vienna is famous for its coffee houses and grand cafés, which once were the centre of the city’s highest echelons of society. Coffee has been an important part of Viennese culture for centuries, and today these cafés remain an everyday part of local life. Places for thinking, reading, people watching, and letting the time drift away. The most famous is probably Café Central which these days has become a bit of a tourist mecca. Cafés Landtmann, Hofburg, Imperial, and Mozart are all long established safe bets, with a favourite of ours being Café Sperl. Aside from all the historic cafes, Vienna is home to many smaller, niche coffee houses offering a more cosy experience.

Head to Kohlmarkt in the Innere Stadt to find the flagship outpost of Demel, the former imperial confectioners. It’s basically the Viennese version of Fortnum & Masons albeit with a smaller offering; the store focuses on confectionary and patisserie. It does both to impeccable standards; the Sachertorte here is particularly good. Find charming chocolate boxes, cakes, biscuits, and in the winter months attractively packaged Stollen. Demel also has an in-house grand café with aproned waitresses serving Viennese specialities. There’s nowhere better for picking up Austrian delicacies to take home for friends and family.

For centuries the Imperial Hofburg Palace was the seat of the Habsburg dynasty. Built in the 13th century, the palace has undergone 700 years of architectural changes and expansions. Today it is the official residence of the Austrian Head of State, and home to three museum spaces: the Imperial Apartments, the Sisi Museum, and the Silver Museum. The surrounding areas are home to a number of other attractions including the Spanish Riding School, the National Library, and the Natural History Museum. An entire day can easily be spent exploring the Hofburg Palace and the spaces around it, so if time is short it’s best to pick and choose the parts most interesting to you.

From mid-November until the end of yuletide, Vienna’s squares come alive with the magic of Christmas. A long held tradition that dates back to the 13th century, Vienna is often considered the Christmas market’s original home. Today’s markets have a lot of tourist tat, but there are still handicraft treasures to be found and delicious gluhwein (mulled wine) to be guzzled. The city hosts over 20 in a variety of sizes. It’s easy to find guides that list all of them, but the most popular include the Christmas Village at Maria-Theresien-Platz, Vienna Christmas World at Rathausplatz, the Old Viennese Christmas Market on Freyung, the Christmas Market on Stephansplatz near the Cathedral, and the market in front of the Schonbrunn Palace which after Christmas becomes a New Year’s market to carry on the merriment. An essential visit when in town over the festive season.