Home Food Where to Eat Vegan Junk Food in London 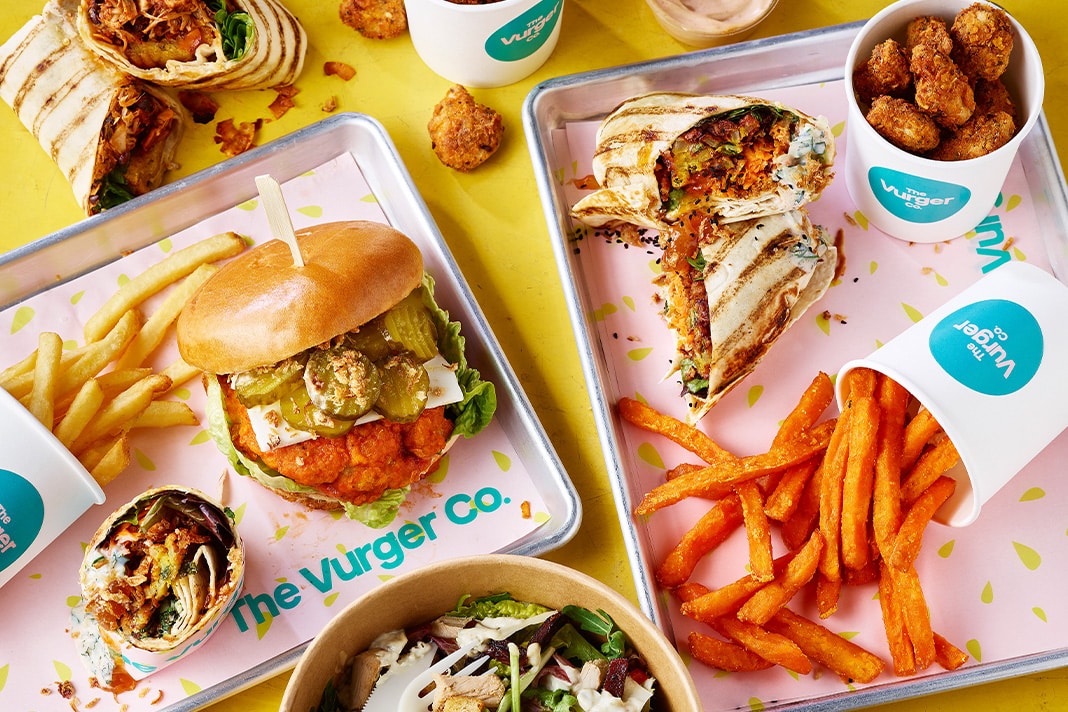 Who says vegan has to be all salads and smoothies? We’ve rounded up the best London restaurants serving vegan junk food so you can enjoy a guilt-free treat 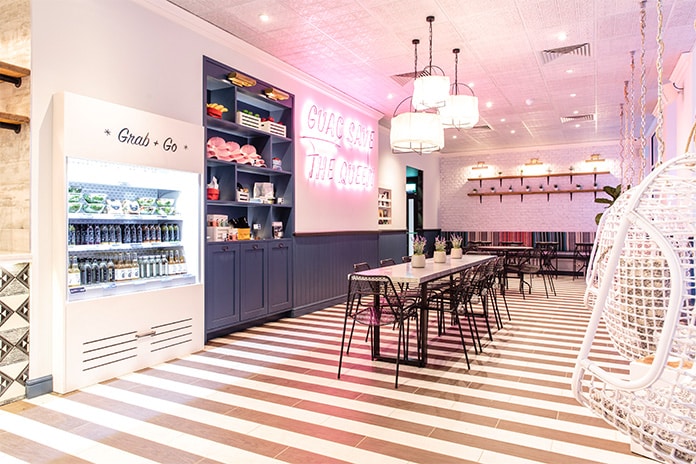 You’ve probably seen By Chloe’s pink neon sign and drool-inducing burgers on your Instagram feed, but in case you’ve been living under a rock, By Chloe is the stylish spot for vegan junk food. With four branches in London, the diverse menu consists of plant-based burgers, pasta, brunch dishes and even vegan ‘fish’ and chips as well as non-dairy frozen desserts and sweet treats. 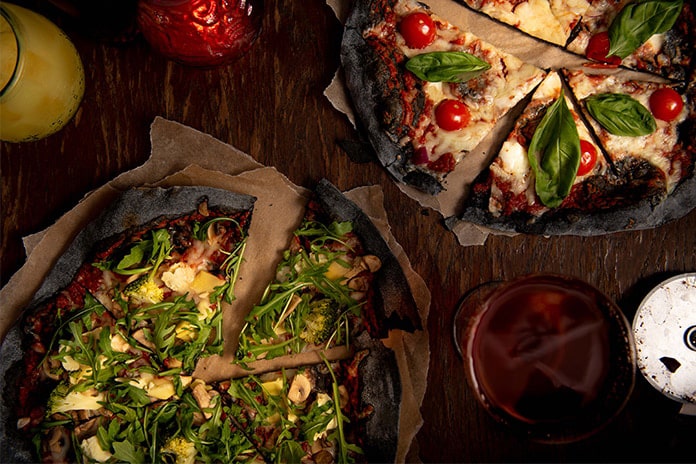 Taking inspiration from the cult 80s film, this vampire-themed eatery serves charcoal-based black pizzas. Their vegan CBD pizza menu ‘Lost Priestess’ has a host of plant-based toppings from ‘No harm-esan’, ‘No-rizo’ to the more conventional broccoli, cauliflower and vegan sausage. The gothic pizzeria will also be serving small plates like buffalo cauliflower wings with vegan blue cheese dip, and CBD-infused cocktails for an extra wellness punch. 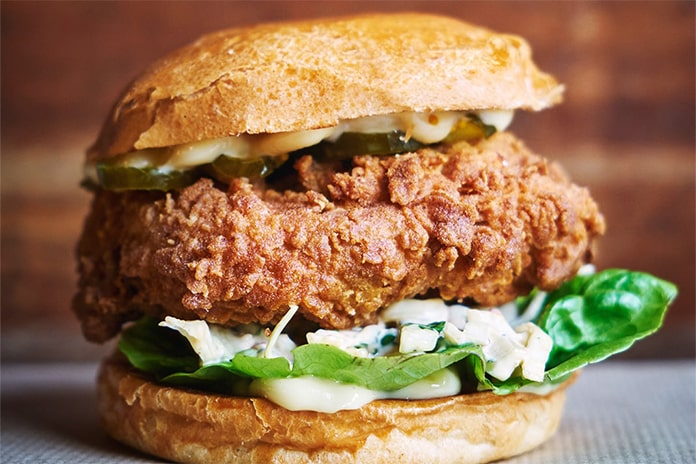 Legendary burger joint Patty & Bun have put a twist on their traditional meaty burgers to create three new vegan versions for plant-based fans. Choose from ‘The Whoopi Goldburger’, ‘This Isn’t Chicken Nuggets’ and ‘Pamela’, a vegan burger with protein patty, spicy mayo, vegan cheddar all wrapped up in a bonsoy bun. Those after a sweet treat can indulge in ‘Dr Speculaas Milkshake’ made from vegan gelato and Biscoff biscuits. Polo Bar in Bishopsgate serves homemade British food 24 hours a day so no matter what time of day or night, you can get your vegan comfort food fix. Their filling vegan club sandwich contains spinach, roasted mushrooms, hummus, guacamole and mixed salad, sliced tomato and falafel within stacks of bread. 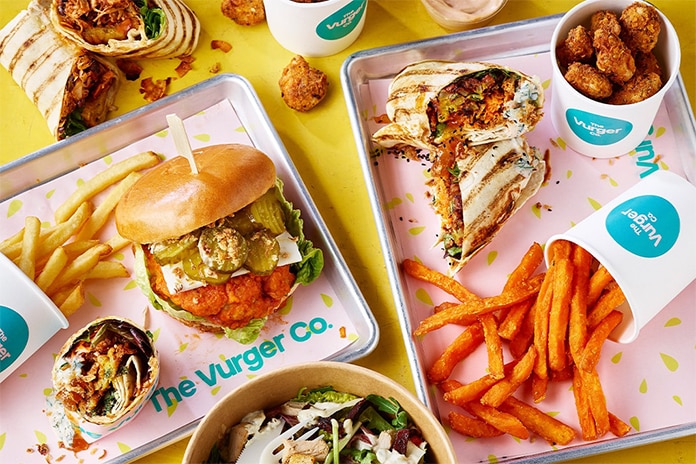 The Vurger Co. first burst onto the Shoreditch scene in 2018 and have since gone on to open a second eatery in Canary Wharf. Their 100% plant-based menu hosts a selection of burgers, including the New York Melt, wraps, salads and a cheese-free mac & cheese. Vurger lovers can even buy the patties from Planet Organic to make at home. 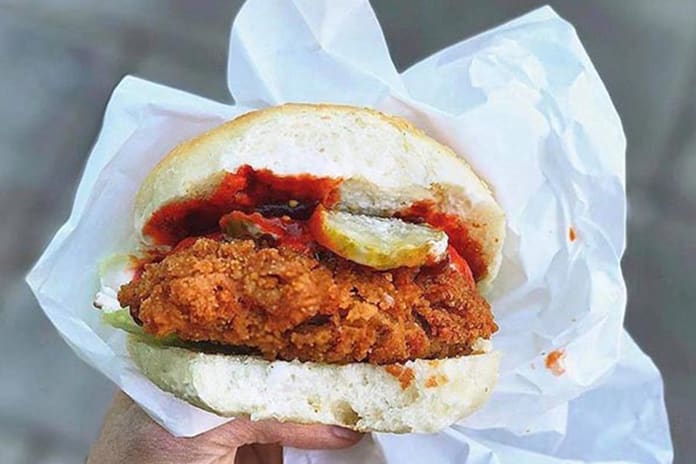 Temple of Seitan work under the catchphrase ‘London made vegan’ and after being dubbed the ‘world’s first vegan fried chicken shop’ we can see why they’re so popular. Hungry diners can choose from a selection of tasty treats including the BBQ Bacon burger, Nashville hot and popcorn bites. The concept is the brainchild of Melbourne couple Rebecca McGuinness and her husband Pat O’Shea. Having worked in KFC before becoming vegan, Rebecca missed fried chicken and so the concept was born. 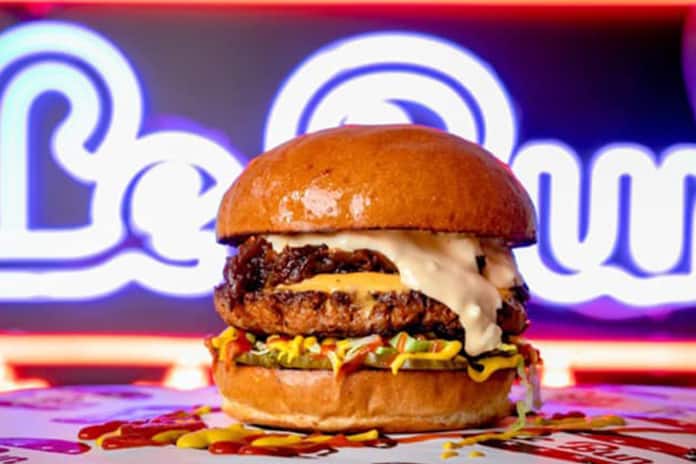 The opening of Le Bun’s pop-up at Rotate Shoreditch will be luring in vegans and carnivores alike with their entirely vegan menu which sees American and French classics reincarnated as plant-based burgers and snacks. Available throughout Veganuary, offerings such as ‘le truffle cheeseburger’ and chipotle maple jerky will redefine fast food – for one month at least. 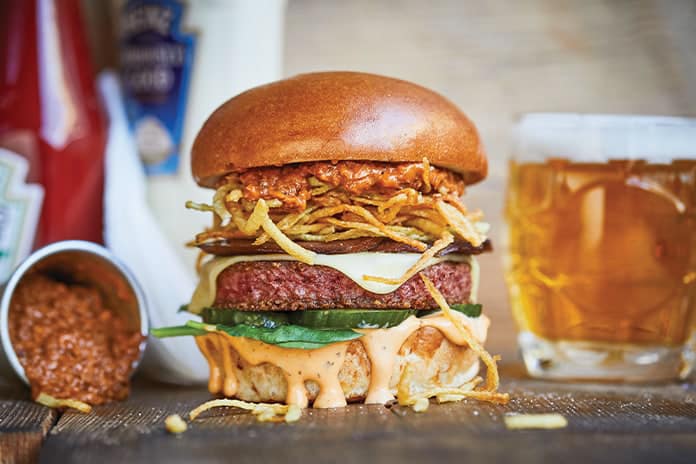 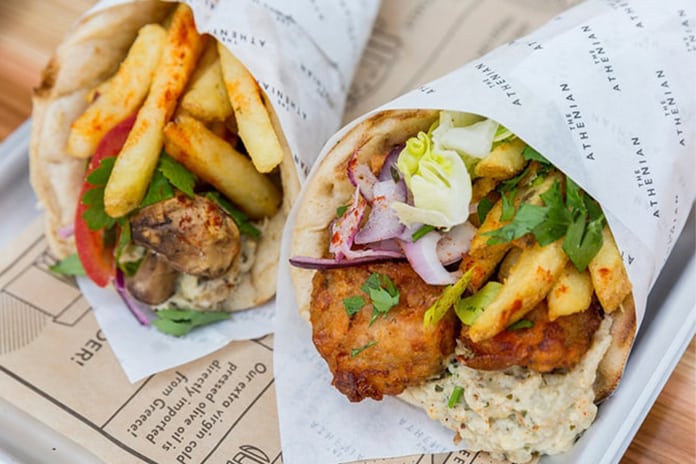 Greek food meat lovers will find it hard to turn their backs on the vegan gyros at The Athenian. The plant-based take on a classic Mediterranean dish sees meat replaced with seitan & soya marinated in herbs, lemon juice and olive oil served with vegan Athenian sauce and oregano flecked fries. They serve vegan sweet treats too, such as the flourless brownie. Hackney’s Martello Hall and the recently launched Canova Hall in Brixton have listened to what Londoners want and introduced the Vegan Viking Pizza to their menus, made with fresh 48hr fermented dough, topped with cashew cheese, smoky tomatoes, pistachio pesto and finished with red chillies, rocket, mint and a squeeze of lemon. 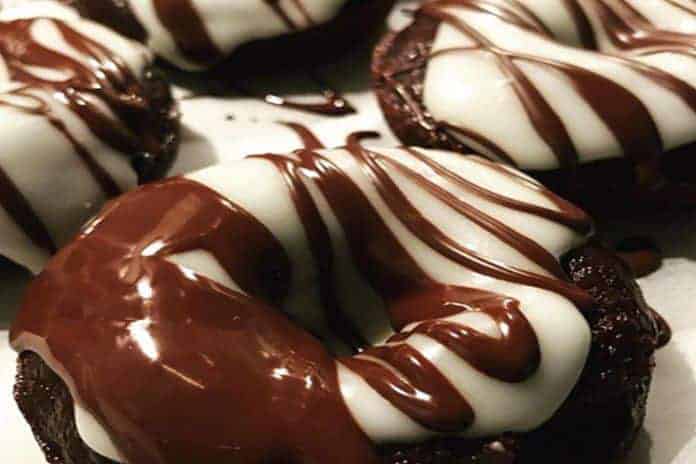 Established in 2010, Cookies and Scream are a 100% vegan and gluten-free bakery. Their mouth-watering menu includes warm cookies, super moist brownies, over baked pies and doughnuts. We recommend the Oatmeal Hombre packed with gluten-free oats and chocolate chips. 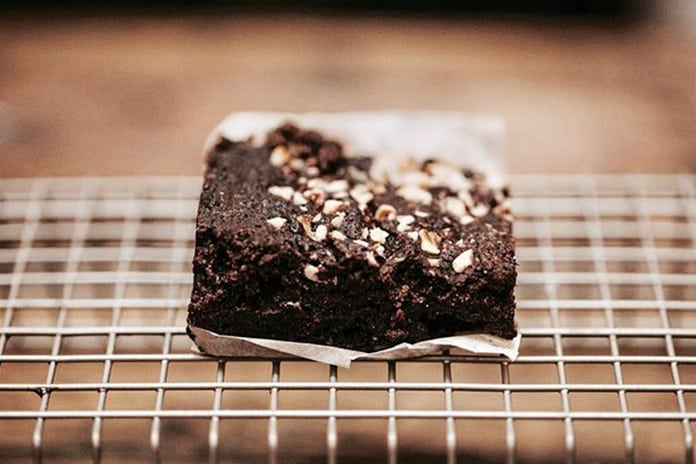 Cupcakes and Shhht first opened in Camden Market in 2012 by friends Cait and Soph and has since grown to have a cafe in Elephant & Castle, a wedding baking department and event and workshop offerings. The ethos lies in creating natural, honest and 100% vegan desserts which are freshly baked and decorated. Try any one of their cupcakes, brownies or cookie sandwiches. Our favourite is the popular salted chocolate, peanut butter, hazelnut gooey vegan and gluten-free brownie, topped with a flavour of your liking.

Layla Turner - 15th October 2021
0
Ash Blonde Is The Must Have Shade This Autumn  I ventured to the award-winning Gusto Hairdressing on Wigmore Street to try the trend for myself.  By...

Protected: The Ocean At The End Of The Lane at the West End

Layla Turner - 13th October 2021
0
Dive into an unmissable tale of magic, memory and friendship this autumn. Theatre lovers will presumably have  been immersing themselves in all things show biz...