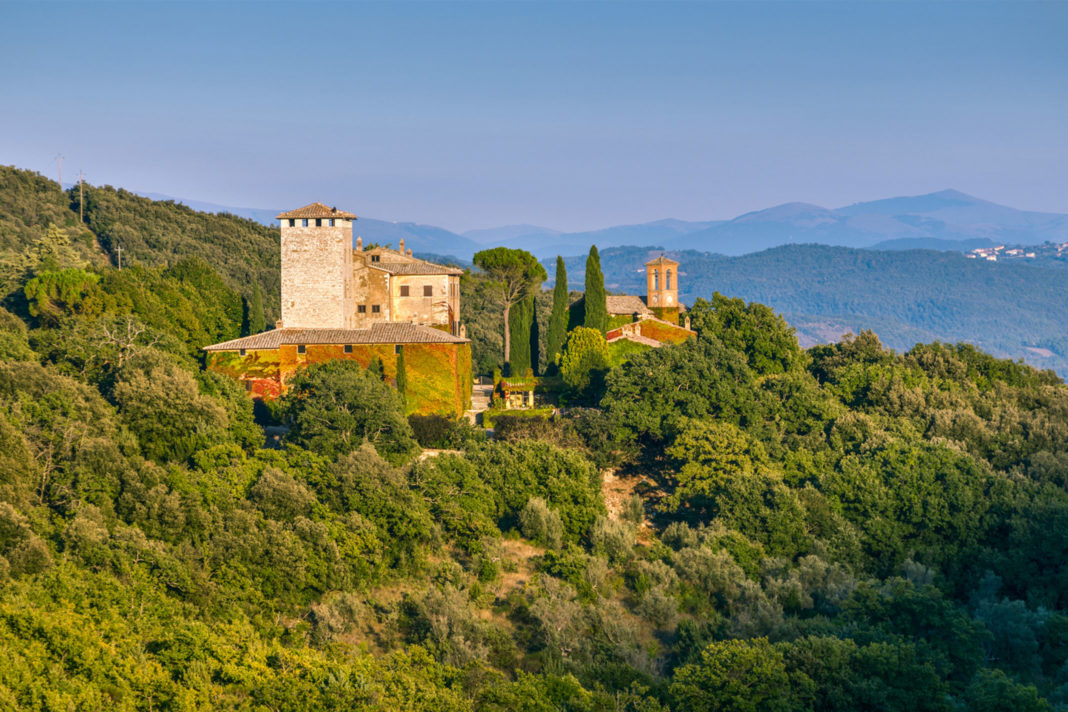 Forget Tuscany. For the uncommercial Italian experience, venture to Umbria
and unearth its untouched beauty.

Often those in search of a provincial Italian escape will yearn for Tuscany – its rolling hills, cypress trees and incomparably good food and wine a siren call for the inner epicurean. But with Tuscany becoming increasingly littered with tourists, there is an idyllic alternative: Umbria. As a result of popular Tuscany drawing the crowds, Umbria has preserved its rustic essence. But with a lesser-known location comes the apprehension of where to stay, and more importantly, what to do. So, where to for accommodation? Simple: Tenuta di Murlo.

Two hours’ drive from Rome Fiumicino airport are Tenuta di Murlo’s private grounds, which stretch thousands of hectares and have hosted famous visitors including Hugh Grant, Elton John, Colin Firth, George Lucas, Stephen Fry and Ralph Fiennes. Murlo’s mountainous ranges, covered in olive groves and oak forests, rivers, lakes and fields are bursting with wildlife and breathtakingly picturesque. And then you get to your villa. Or cottage. Either option is boutique travelling at its best.

Among the five villas and two cottages Murlo’s service is unfailingly five star. Sure, it’s more of a self-contained set-up rather than a hotel (although plans are already underway for a Four Seasons development), but the home-style living with hotel-like amenities complements the estate’s natural surrounds, with more than enough character to satiate your appetite for Italian grandeur.

Medieval castle views, anyone? Check. How about infinity pools? Or fully equipped contemporary kitchens? Double check. Murlo’s a contemporary blend of modern fixtures and furnishings with traditional architecture dating back to the 14th century. At Villa Santa Croce you also benefit from 360-degree views in a stately three bedroom home atop Monte Santa Croce. With breakfast, dinner and barbecue terraces, a huge outdoor living area and sympathetically landscaped gardens (replete with hammock), relaxing will
not be difficult.

As a result of Tuscany drawing the crowds, Umbria has preserved its essence

Villa Caminata comprises five bedrooms with a separate one-bedroom cottage and has over 3,000 blooms throughout the year. Accommodating up to 12 people, it’s the most traditional in terms of décor and is terrific for large groups with again, terraces aplenty for celebrating or feasting. Villa Torre is a converted medieval defence tower and its roof terrace is a pretty terrific surprise, especially when accompanied by good company and wine. A dream for small families, it’s got two king-size bedrooms and one with two bunk beds, plus a lovely fireplace-fitted living room. Subtilia, however, is fantastic for large groups, considering its 18 guest capacity. There’s also a separate cottage by the pool, ideal for newlyweds, yet both 16th century properties are afforded direct views of Antognolla Castle and its championship golf course.

Not forgetting San Savino, a four bedroom abode named after Saint Sabinus, Bishop of Spoleto, to whom the estate’s church (now sadly desecrated) was once dedicated. Fortunately, though, San Savino’s original terracotta floors and kitchen remain intact, with its wooden terrace serving as a brilliant observation deck. But a trip to Tenuta di Murlo is not all sitting and sipping wine while soaking in the atmosphere – there are ample activities to immerse yourself in too.

You’re in Italy. So, it’s only right to start with the most basic fundament of Italian life: food. The tastiest dishes you will ever try in your life can be found at Il Caldaro, Murlo’s on-site restaurant. Showcasing local suppliers, the produce is phenomenal, and what they do with it even better. Do not leave without experiencing the Burrata. In nearby Torgiano you can see the locals’ high-end interpretation of traditional rustic meals at Le 3 Vaselle.

For those wanting to eat pasta they’ve made, in-villa cooking classes can be arranged with the estate’s professional chefs preparing a menu of dishes endemic to the area, such as Pumpkin, Sausage & Dill Tortelli and Vegetable Crêpe with Porcini Mushroom Sauce. If you want to take this a step further, you can personally ‘shop’ for your ingredients by hunting wild boar, pheasant, hare, fox and partridge, or foraging for truffles and wild asparagus.

To find the perfect wine to pair with your creations, beeline to Lungarotti Winery. At the family-run vineyard there’s a plethora of certified white and red varieties, from light, crisp Pinot Grigios, Chardonnays and Trebbianos to full-bodied Sangoiveses, Cabernet Sauvignons, Merlots and Rubsecos. But if you simply can’t choose, try them all at Lungarotti’s wine tasting, where you can tour the winery and discover the different drops from the owners themselves. Work off the calories with a game of golf at said Antognolla Golf Course or Perugia Golf Course, which is only 20 minutes’ drive from Murlo.

Alternatively, explore the vast Estate’s mountains, valleys and farmsteads with a hike and look forward to stunning sights, namely Lake Trasimene. If hiking doesn’t take your fancy, perhaps a safari of the local cashmere producers is more your kind of adventure. Be guided around the Umbrian Cashmere Road to Brunello Cucinelli’s flagship boutique in Solomeo, treat yourself at Lamberto Losani’s warehouse, and go inside Rocco Ragni’s Dominican monastery studio.

Nearby Assisi, the birth place of Saint Francis, is pretty special and popular owing to its exquisite churches and sensational frescos to rival those in the Sistine Chapel. After soaking in Umbria’s fantastic culture, unwind in your villa with spa and beauty treatments organised by Murlo’s concierge service. Or have them simply make life easier by performing any errands you need to run or scheduling any activities you’d like to try. When it comes to experiencing Umbria through Tenuta di Murlo’s incredible facilities, you’ll quickly learn that anything is possible.