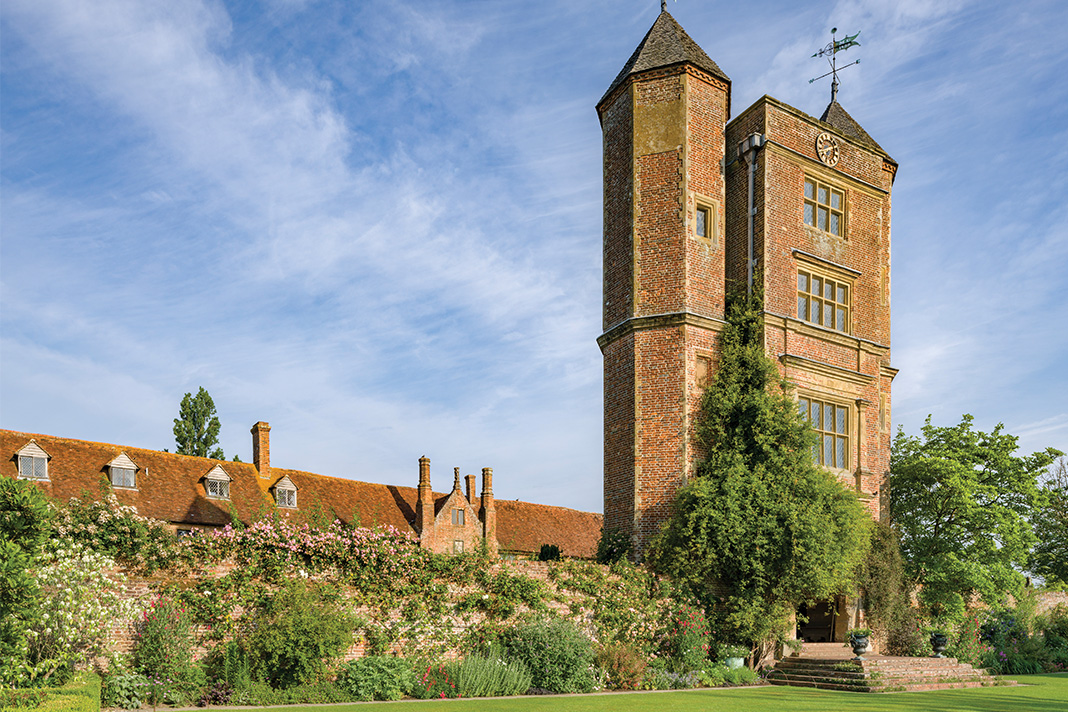 When Vita Sackville-West and Harold Nicolson bought Sissinghurst Castle in Kent in 1930, parts were so ruined they had to be demolished. What they created from the wreckage became one of the country’s best-loved interiors.

“The sitting-room is lovely except that the opening is too big. My bedroom, w.c. and bathroom are divine. The primroses are superb. Dine. Bed. Rebecca curled up beside me. Home.” The image of diplomat and diarist Harold Nicolson, one half of the famous duo responsible for the creation of Sissinghurst Castle in Kent as we know it, cosying up with his wire-haired terrier represents in microcosm all that is seductive about the National Trust-maintained exemplar of the Arts and Crafts Movement. 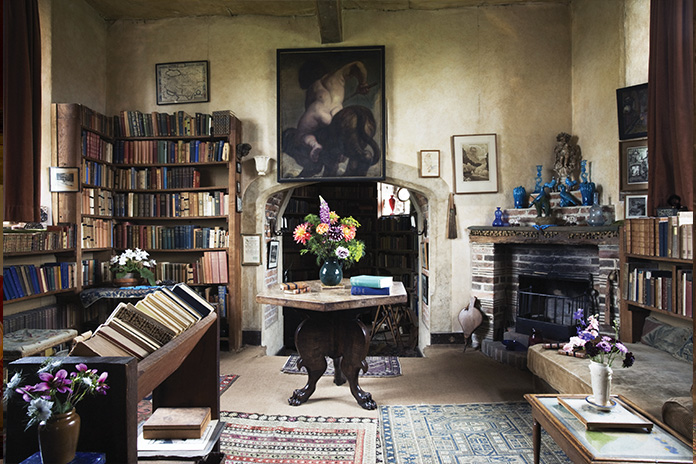 The other half of that pair was, famously, Vita Sackville West, writer, plantswoman, garden visionary, sometime lover of Virginia Woolf and inspiration for the latter’s androgynous titular Orlando. That Sissinghurst is a castle, albeit the remains of a once-stately Elizabethan fortress, befits Vita’s lineage; having been born at the altogether grander Knole just down the road in Sevenoaks, described as “a medieval village with its square turrets and its grey walls, its hundred chimneys sending blue threads up into the air”, she was accustomed to grandeur, though the estate was ultimately bequeathed to her cousin after her father’s death. That it was concurrently a place where husband and wife would retreat from the tower to the South Cottage, now open to the public, and nestle down amid their books and artfully battered possessions was befitting of the bohemian circles they moved in, courtesy of being on the fringes of the Bloomsbury Set. 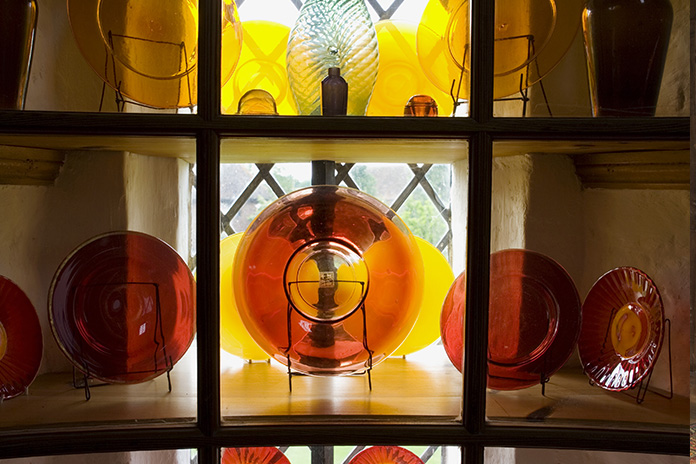 Comprised of a 16th-century tower and other scattered buildings, to which is attached perhaps the most famous garden in England, Sissinghurst was a wreck when Vita and Harold bought it in 1930. Standing on the site of a former stone manor house, complete with moat, from the Middle Ages, it was rebuilt as an Elizabethan mansion before falling into ruin in the aftermath of the Civil War. By the time that Vita and Harold got their hands on it, parts were in such disrepair that they had to be demolished, its most striking survivor a four-storey red-brick Elizabethan tower with octagonal turrets. It is here that Vita sequestered herself away, up a creaky wooden spiral staircase, surrounded by her books, to write. Admittance to her sanctuary, even to family members, was rare. Today visitors can climb the winding stairs to take in the relatively Spartan scene, which articulates impeccably Vita’s style. A preference adopted from her time at Knole, she liked her possessions well-worn and lived-in (even new items had to be given a strategic knock-about), as evidenced by the heftily hewn writing desk, on top of which sits two photographs: one of Harold, and one of Virginia Woolf. That the two portraits sat side-by-side without friction was thanks to Harold and Vita’s open relationship (he had affairs with men, while she pursued relationships with other men and with women; the arrangements did not seem to impact on their shared love of Sissinghurst). Behind these images of her two great loves hangs a heavy Flemish tapestry in a soft blue hues, featuring a garden scene which served, perhaps, as inspiration for Vita’s long-running weekly gardening column, In Your Garden, in The Observer. 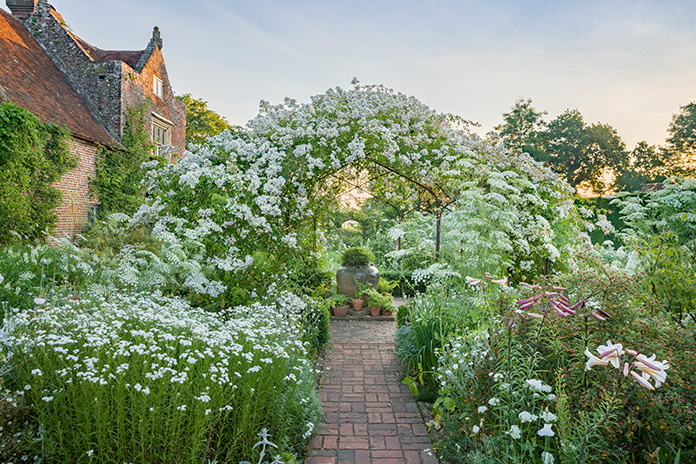 It remains, after all, as a horticultural trailblazer that Sissinghurst is so renowned. “I like muddling things up; and if a herb looks nice in a border, then why not grow it there? Why not grow anything anywhere so long as it looks right where it is? That is, surely, the art of gardening,” wrote Vita, whose artistic eye was responsible for the glorious Arts and Crafts garden. The historical importance of Sissinghurst Castle Garden comes from its role in conveying Gertrude Jekyll’s design philosophy, the most influential feature of which is the White Garden, which propagated Jekyll’s idea of using colour themes in planting design. The garden straddles the organised (it comprises of a series of ten ‘rooms’, divided by pink brick walls and high-clipped hedges) and the informal, allowing Vita the artist-gardener to plant as she saw fit. Each ‘room’ contains its own drama, opening out into new vistas as you move between each and sending the admirer on a walk rich with discovery at every turn. It was a creation that husband and wife collaborated on in perfect symbiosis; while Harold drew the lines of the rooms, Vita planted them. 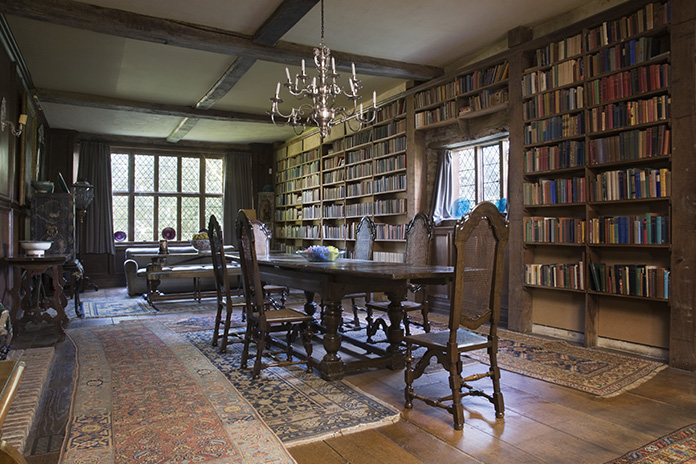 It was not the only aspect of their shared life here in which they found harmony. Their joint love of books find expression in the library, an exquisite long room lined, naturally with their books (their extensive 11,000-striong collection makes it the third largest library in the National Trust’s care), and decorated with busts, weighty tapestries and Chinese lacquer cabinets, thought to hail from Knole and crafted from a rare wood similar to ebony. But perhaps the key to the harmonious relationship that allowed them to create this enduring work of horticultural history, can be found in their decision to grant themselves their own space. (Indeed, despite their open relationship, tensions arose between Harold and Vita’s lovers; some  – Violet Keppel – he found manipulative; and he clashed with Virginia Woolf on account of her pacificism and his, rather unfortunate, friendship with Oswald Mosley.) While Vita retreated to her writing room, Harold withdrew to the South Cottage to write and contemplate. Here at the cottage, built from a fragment of the great Elizabethan mansion and overlooking the sunset colours of the Cottage Garden, visitors will find his book room, as well as the separate bedrooms of husband and wife – surely instrumental in the longevity of their marriage, and the harmonious work on the project that kept them together.