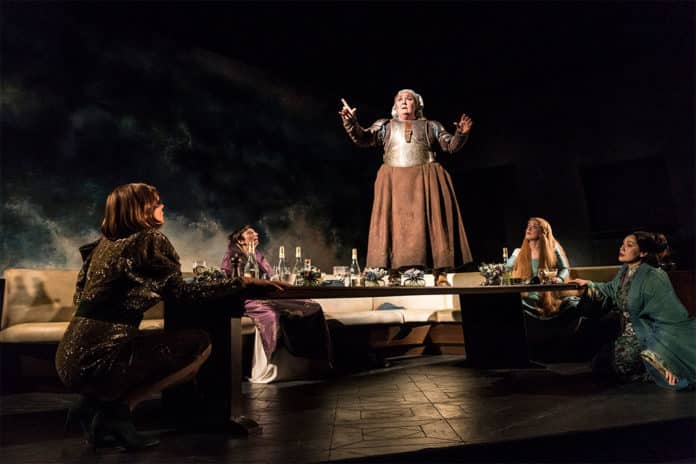 Caryl Churchill’s feminist fantasy is given a new spin at the Lyttelton Theatre. Read on for Absolutely’s Top Girls review…

First performed in 1982, Caryl Churchill’s much-loved feminist play comes to the National in a new, all-female production directed by Lyndsey Turner. It’s at once funny and political, naturalistic and fantastic, touching and raw in its story of women, work and family, very much of its time. In 2019, Top Girls reads as a play about the 1980s, the decade that brought the UK its first female prime minister and saw the world of women’s work broadening beyond recognition in comparison with previous generations.

These previous generations are a focus of the play’s famous fantasy dinner party scene. The scene opens in a restaurant, where 1980s career girl Marlene – all shoulderpads and big hair – is celebrating her promotion to managing director of a recruitment agency with some carefully chosen guests. There’s 19th century explorer Isabella Bird,13th century Japanese concubine Lady Nijo, ninth century Pope Joan, Bruegel’s Dull Gret as depicted in 1561 and Patient Griselda from Boccaccio’s Decameron. All women with wildly differing lives, from different periods in history and without anything in common, yet they comfortably share stories, talking over each other in their eagerness and increasing inebriation. There’s a hilarious moment when Pope Joan recalls giving birth during a papal procession, revealing her to be a woman and resulting in her being stoned to death.

Top Girls is traditionally played with just seven actors, each doubling up, but this production casts an extravagant 18 people, and the stage is larger than the play is used to. Four entirely separate scenes make an unusual formula, and after a late interval, the final scene sees Marlene return to her provincial home, where her sister’s life hasn’t benefited from what for Marlene are the freedoms afforded to women by the world of work. Her daughter Angie – revealed to be in fact Marlene’s abandoned baby – is eager, as Marlene was, for a London life, but opportunities, as the play highlights, are never equal. Welcome to the 1980s.

Top Girls is on at the Lyttelton Theatre until 20 July. For more information visit nationaltheatre.org.uk