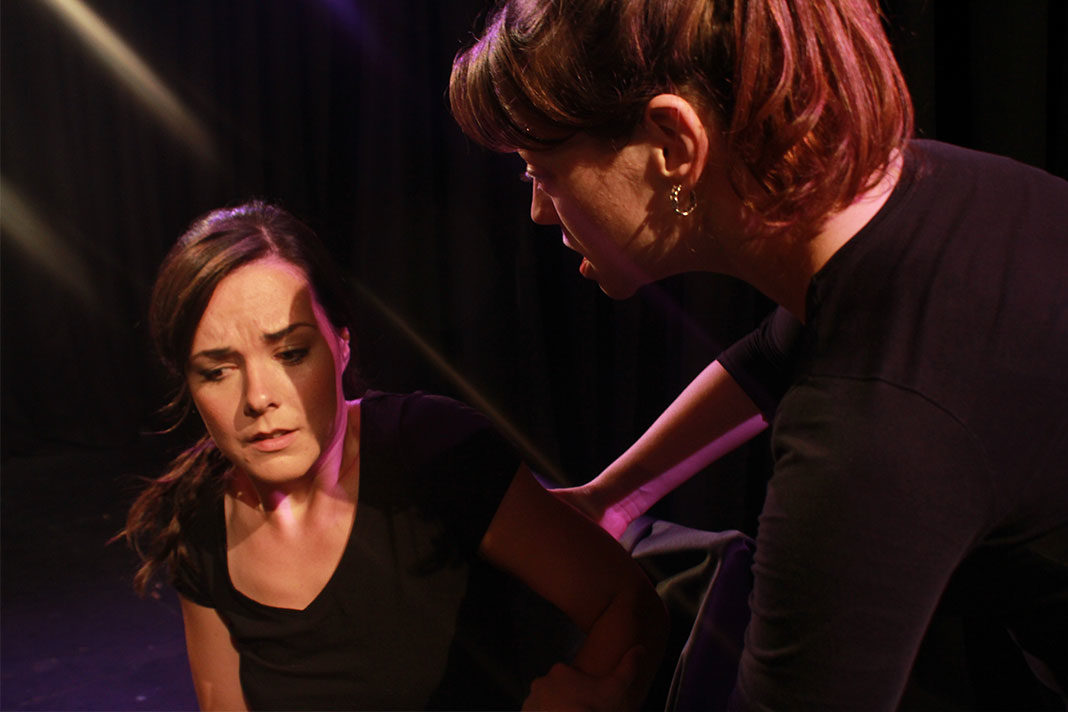 The small, intimate space hosting Mule doesn’t give much away. We take our seats as frantic texts from one sister to another bleep one, after another, after another onto a large projector hung over a minimalistic set.

This constant onslaught of panicked messages crescendos, social media posts are thrown into the display and we hear the anguished phone call from a mother filing a missing person’s report for her daughter. This incredibly effective opening instantly hooks the audience into a sense of distress for this girl, missing from her summer in Ibiza. From there, the play takes off, exploring the murky, hedonistic world of drug smuggling and its apparent female-isation.

Multi award-winning writer and director, Kat Woods, has a good nose for picking issues that work on stage as this ‘Peru Two’ inspired production demonstrates. Without passing judgement, Mule documents the fallout from the exploitation of these women – the media sensationalism, the social media trolls, the prison violence, all of which affects not only the girls but also their families and friends. The cast consists of just two; Aoife Lennon and Edith Poor, both of whom delivered hugely engaging performances. They skilfully hold down their central characters while snapping in and out of a supporting cast of journalists, prisoners, clubbers and prison guards. What was especially impressive was the pair’s success in pulling off a dynamic cinematic-like element, in which their character transitions overlapped with split second timing to give the effect of crossfading scenes.

You might assume that the exponential flipping in and out of characters would be a detriment to the flow of the storyline, however the emotional weight of Lennon and Poor’s central roles anchored the production and made it easy to follow.

Mule is a compelling play brings humanity to two figures who the media and public have often represented and misrepresented, but rarely treated fairly. The real life vitriol of the projector and emotional turmoil of the performances deliver a powerful message about the way the media can mistreat people, and the suffering uninformed public conversation can cause.