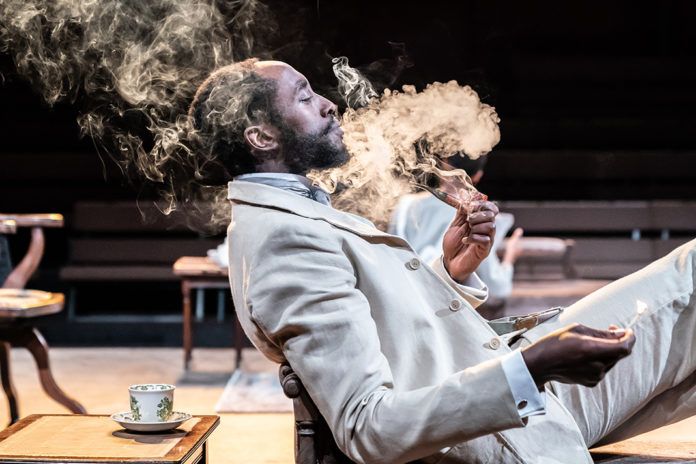 The Convert, beautifully written by Danai Gurira is possibly one of the best pieces of theatre currently showing in London, one of which I’m sure we will be hearing much more of.

Set in 1890’s Southern Africa, now Zimbabwe, the play presents two very clear images: one of traditional Africans in their tribes and unique dress, and another of an African man by the name of Chilford, who has devoted his life to Catholicism having undergone a considerable change to become more like the western society. Themes of religion, value and relationships persist. What stands out perhaps most predominantly though, is the idea of one foreign group infiltrating and usurping an indigenous group and imposing their values and systems upon them. Beautiful lighting by Bruno Poet and sound composed by Max Perryment combine to produce an atmosphere of uncertainty, fear and rectification. 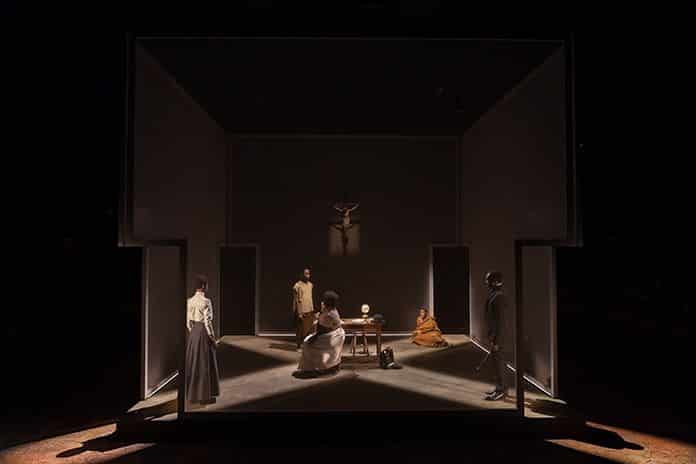 We meet a young woman by the name of Jekesai, played by the wonderful Black Panther star Letitia Wright. She is introduced by Mai Tamba, a maid who lives with Chilford.  Jekesai is an immensely curious character. She is overwhelmed by the house she is occupying; the concrete floor, the large crucifix and the furniture to which she does not sit on but merely admires. Her physicality is free and relaxed in comparison to Chilford, a self-contained rigid man with very specific mannerisms. But soon you begin to see the change as she begins to adapt too. Chilford takes Jekesai in to live with him and like an experimental subject, changes her name to Ester, begins teaching her all about western culture, Catholicism and becoming a missionary for her community. Ester becomes undeniably devoted to Jesus and all of his teachings. Mai Tamba beings to worry about her and she warns her about losing her identity and her values.

A truly significant moment in the play is when we meet Chancellor and his fiancé Prudence, the well-to-do, highly-educated citizens from a different class, not unlike the Victorian characters from The Importance of Being Earnest. I thoroughly enjoyed the sentimental tea and sugar moment adopted by director Ola Ince, to truly mark the influence of white Britain on these people. Thus at this point in the play, we can clearly identify the individual struggles these characters have with this violation upon their culture. The local people of the community still linger around the edges of the house and they beg Ester to return to her family. Chilford goes so far to describe Paganism as “backward rituals” and to be Christian is to be “out of the darkness and into the light”. Ester is completely torn between two identities and two very different worlds. She and Chilford have become somewhat figures of hate with the local people proclaiming the religion they have now adopted is “a white men’s thing”.

The sheer intensity and powerful performance from each individual actor is a credit in itself as well as the wonderful and educational play that Gurira presents us with. It is a performance truly deserving of standing ovation.

The Convert runs at the Young Vic until January 26th; youngvic.org