Home Travel Long Haul Out of Africa: Discover the Highlands of Tanzania 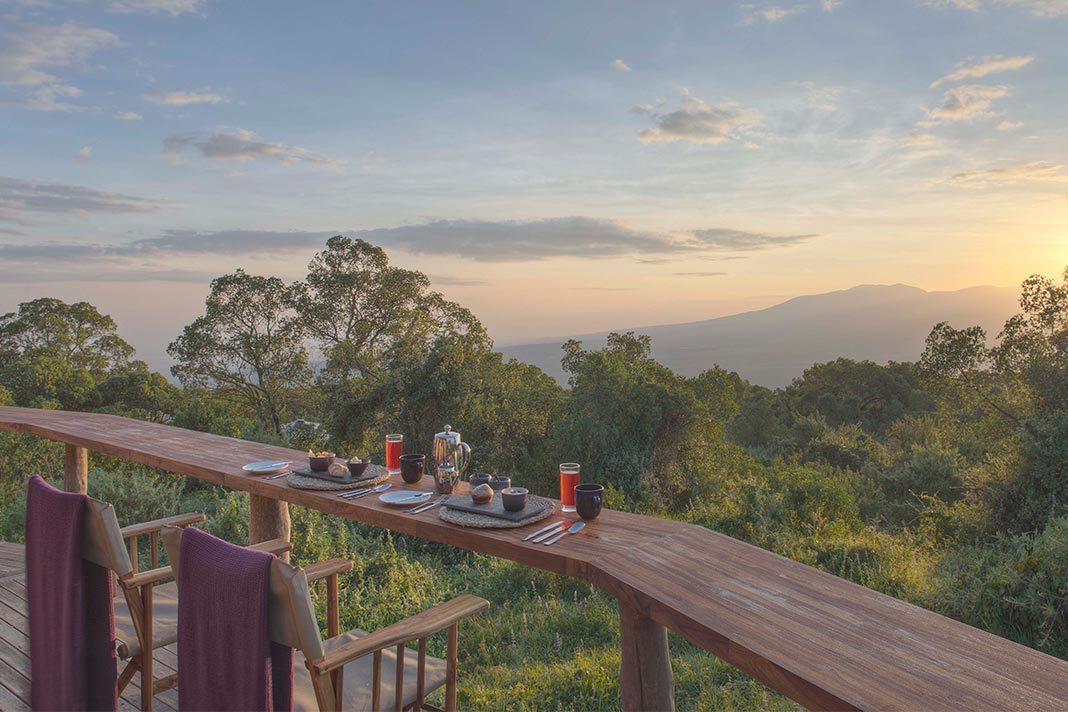 On a trip to the Highlands, you might expect to see a fat grouse flying out of the heather, some shaggy horned cattle grazing gently and perhaps the odd stag standing atop a hill. You’re less likely to see a zebra. Not so at The Highlands in Tanzania. Named for its Scottish counterpart, Asilia’s camp is perched on the slopes of the Olmoti volcano. It’s high above the famous Ngorongoro Crater and offers a completely unique way to experience safari.

The camp itself takes some getting to. After an eight-hour flight to Nairobi, an hour to Kilimanjaro and then a short trip in a small aircraft, we arrive at a tiny airport in Lake Manyara. Our guides who introduce themselves as Baraka and Lenga, both of them dressed in full Maasai regalia. We pile into an enormous 4X4, somewhat beleaguered by our journey. We start along the road to the Ngorongoro Conservation Area not knowing that this is the last time we will experience anything resembling our idea of a road.

Soon the terrain begins to become rougher and the ride significantly less smooth. As I attempt to drink from a glass bottle, I almost take out a tooth going over a pothole. Lenga looks in the rearview mirror with a grin and asks, ‘Do you know what we call this?’ I shake my head. ‘An African massage.’

Our guides take us for a hike before we head to the camp. We are joined by a ranger, who leads us up the steep incline of the Olmoti volcano. For a long time, there is not much to see other than the ground rising before us. For an inexperienced hiker, the going is a little tough due to the heavy dust and the afternoon sun beating down. I do learn my first bit of Swahili though, as the ranger catches me almost tripping. ‘Polepole!’ she cries, which I learn to my great amusement means ‘Slowly, slowly!’

As soon as we reach the top, the walk is worth it. The landscape sprawls below us, undulating hills and vast plains carved up by a river glistening in the sunshine. Spying two Maasai children driving a herd of rail-thin cattle through the water creates one of those moments when the untalented wish they could paint. Instead I snap pictures on my iPhone.

We arrive at camp dusty and exhausted – though ‘camp’ does the set-up a disservice.

Futuristic-looking domes constructed from taut canvas and rigid exoskeletons dot the area connected by paths and wooden gangways. They are exquisitely decorated with stylish wooden furniture, furry throws and accents of tartan as a nod to The Highlands’ namesake. Our dome features two double beds facing a clear window looking out on the stunning scenery. This means that we wake up to an unrivalled sunrise every day. Staff are all African and the camp is designed to leave a minimal ecological footprint. It balances a feeling of being in the wild with exceptional comfort, offering peace rather than quiet with the sounds of the hectic bush all around.

The obvious draw of Ngorongoro is safari. We set out stocked with snacks and drinks; the drive to the crater itself takes an hour or so. On our way we spot zebras and birds including the amusingly coiffed kori bustard before descending into the crater. The ambition of most safari goers is to spot the Big Five – the African lion, African elephant, Cape buffalo, African leopard and rhinoceros – all of which can be found here. Those hoping for giraffes will be disappointed. We happily cross off three of the five almost immediately, spotting the enormous buffalo, an elephant and, most unusually, a pride of lions feasting on the carcass of a hippo. Baraka and Lenga explain that the hippo must have been old and dying, otherwise lions would never risk attacking it.

As we sit and watch, jackals circle the male lion guarding his prey, coming too close every so often and getting a roar of disapproval and a swipe of his claw. The most magical part of the day comes when Baraka and Lenga drive us to a secluded spot and lead us to a beautiful picnic set up under the trees complete with wine and and buffet. We eat looking out at the buffalo in front of us. As our day in the crater draws to a close, we lament having not seen a rhino. Lenga suddenly slams on the brakes and points. We scrabble for our binoculars and there, in the distance is a mother rhino with her calf, plain as can be. Four out of five ain’t bad.

At the end of our stay, we pack our bags with regret. Asilia has achieved something remarkable up there on the slopes of that volcano, combining genuinely wonderful people with untouched surroundings and high quality facilities that, when added together, really do equal a once in a lifetime experience.

Catherine Hales was a guest of Kenya Airways and The Highlands. Kenya Airways fly from London Heathrow to Kilimanjaro via Nairobi, from £777 return; Coastal Aviation has connections to Lake Manyara from £130. The Highlands costs £700 per person per night including full-board with drinks and activities; low-season rates drop to £330. Ngorongoro Conservation Area fees are £54 per person for 24 hours and the crater descent fee is £227 per vehicle.