Home Home We Review Swyft’s Sofa in a Box 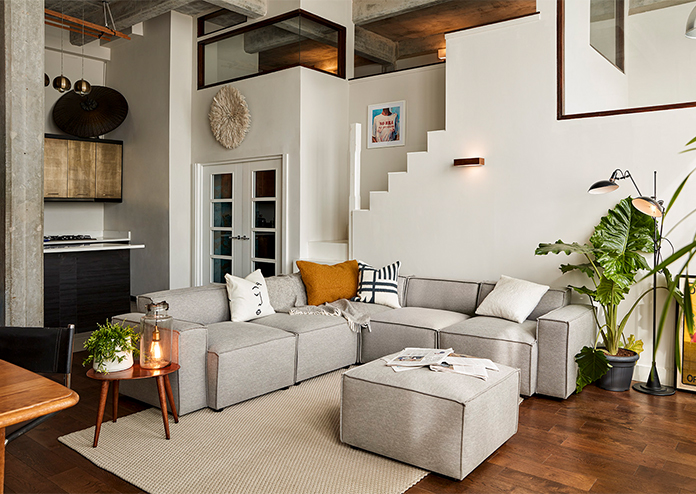 Is Swyft’s sofa in a box as good as they say? Absolutely London finds out

The seven boxes may be huge, and stacked up together they block all light from the window. But even so there has been no problem getting them inside the house, despite the narrow entrance. Because it’s a common problem – having spent months agonising over dimensions, you’ve finally decided on the perfect sofa. It’s going to look fabulous in your living room and you’re even feeling quite smug about your careful measurements. But when the big day arrives, the two-man delivery isn’t able to manoeuvre the vast item through the front door, through the hall and into its rightful sitting room spot. The angles are too tight, the corner is prohibitive. The result: no sofa, a return negotiation and a new search.

But there is another way. A new generation of sofas solves the problem of access with the clever sofa in a box concept. Or seven boxes, which is what I’m looking at. Inside this mountain of cardboard is a modular sofa just waiting to get out, though the idea of putting it together ourselves is a bit daunting. Apparently no tools are needed, apart from large scissors to attack the packaging. Instructions have been emailed separately, according to a large sticker on the box, but once we have got through the (frankly quite challenging) cardboard and plastic, it’s apparent that there’s really no need for a diagram because the sofa’s construction is entirely self-explanatory.

Yes, putting it together is a two-man job, but only because the clever slip-and-slide mechanism needs a bit of force from both directions (but only a bit – this isn’t a strength game). Even someone lacking in spatial skills can see immediately how it fits together, and with a little bit of strategic thought we are able to construct the thing in minutes. In terms of difficulty, you could say it’s trickier than changing a lightbulb but much easier than building, say, a Playmobil carpark, or a flatpack chest of drawers.

The box philosophy even solves the follow-up problem: moving house with a sofa, because dismantling is as simple as the initial build, and each piece can easily be carried by one person. You might even be able to fit a sofa in your car, though I haven’t tried that.

Swyft’s Model 03 is the online sofa company’s only modular design and it’s a flexible option. Our three-seater with ottoman feels huge, solid and comfortable and it’s futureproof too – we could add to it with another piece if we needed and the stain-proof linen covering is designed to survive the worst that family life can throw at it. There are said to be 17 different possible configurations, which is good news for anyone who enjoys moving their furniture around.

And best of all, Swyft is not a believer in the six-week wait. They can deliver in as little as 24 hours. So if you’re after a new sofa for Christmas, it’s not too late.

Like this? Check out these easy home upgrades to do this weekend