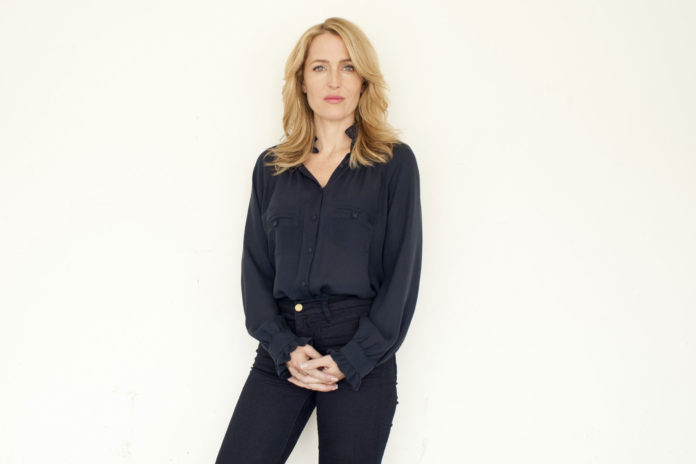 As The X-Files returns for a new series, Gillian Anderson is more than happy to be chasing aliens again

When the announcement came that The X-Files was returning to our screens, the internet exploded with joy. Yet amid the fanatical reception from loyal followers of the travails of Agents Mulder and Scully, it can be easy to forget that for the actors who played those iconic characters, there’s something special about returning too.

“I had the lingering sense that I had never really said goodbye to the character or to the story,” says Gillian Anderson, who played iconic FBI agent Dana Scully on the small screen from 1993 to 2002 as well as in the two movie offshoots. With her partner, dedicated but paranoid Agent Fox Mulder (David Duchovny), Scully investigated all manner of paranormal activity and the duo quickly became cult icons, while both Anderson and Duchovny went on to enjoy huge career success.

For Anderson, the role that changed her life and launched her as a global star was difficult to shake, so much so that when she was first asked to return to the role she said no, having “worked really hard putting Dana Scully to sleep”. However, eventually she relented. “Well, at first I thought to myself, ‘there’s no way in hell I want to do this again’, but everyone kept telling me it would be fun and after a while I just said, ‘Oh, what the heck! Let’s do it!” Also, the chance to reunite with Duchovny was hard to pass up. “After shooting the last film, we still thought we would get to do a third,” she says. “But then it never happened. So I thought it would be great to be able to work with David again and get some closure to what had been a major part of our lives.”

Re-launched as a six-part ‘event’ series running in the UK on Channel 5, the show has been well-received by fans and critics alike for capturing the mystery and nostalgia of the original while updating its approach for the digital generation. What has also been noted is how fantastic both title stars look and how the screen still fizzles with their easy chemistry. Anderson in particular has barely aged and still radiates luminous beauty, with the trademark porcelain skin and reddish-gold hair that made her a poster girl for sci-fi fans the world over.

Off-screen, one of Anderson’s more startling traits is her rather proper British accent. So accustomed are we to seeing her on TV speaking with an American drawl that it is easy to forget she has spent a lot of her time in the UK. Born in Chicago, she grew up in Crouch End until the age of 11 when her parents moved back to America. Then, aged 24 and living in New York, she landed her breakout X-Files role.

Anderson considers herself both British and American but for the last few years she has been based firmly in London where she lives centrally with her sons Oscar, nine, and Felix, seven. Her love of the capital is well known and she has said in the past that when she arrives back in town she likes to gaze out of taxi windows to “soak in the city I feel so grateful to live in”.

In the intervening years since we last saw her as Scully, the 47-year-old has been carving out a new identity in a variety of TV series including BBC2 dramas The Fall and Hannibal. Since turning 40, Anderson has experienced a resurgence. In particular she has been hailed for her role in The Fall, where DSI Stella Gibson is an icy but gifted detective who strides down the corridors of Belfast’s central police station. Brought in from the Met to solve a series of murders, she terrifies male colleagues with her confident sexuality and incisive brain. The show is shot in Belfast and a third series is expected this year.

Anderson is known for playing strong, outspoken females, and her role in The Fall is no exception. “Stella is one of the most difficult but creatively satisfying characters I’ve ever played,” she says. “It’s been an honour to be in her company, even though it’s a complicated process for me to play her. It’s also easier to work when you don’t have to be on a plane all the time and you feel you’re not disrupting your life with your children as much.”

In 2014, Anderson took a job even closer to home when she played Blanche DuBois in A Streetcar Named Desire by Tennessee Williams at the Young Vic, for which she won the Evening Standard Theatre Award for Best Actress and a Laurence Olivier Award nomination. In June this year she will reprise the role at St Anne’s Warehouse, a theatre in New York, an undertaking the busy actress is both excited and exhausted by. “It’s going to be very demanding and draining but it’s such a great and important role,” she says. “I’m often drawn to playing complex and troubled women, and those are the characters that give you so much insight into human nature. Human beings are complicated creatures, aren’t we?”

Indeed, Anderson herself is a complicated and mysterious personality. She is understandably guarded about her private life, having been married twice and having once revealed that she’d had relationships with women in the past. Also, during the original X-Files run there were rumours of both a love affair and a fallout between Anderson and Duchovny (though it’s difficult to know how much of that was imagined by fans desperate to see the great on-screen romance reflected in real life). Whatever their differences, Anderson says she and Duchovny are “a lot closer” than before. “We’re both a little older and have a little more perspective that probably comes from being parents and going through different struggles in our lives,” she says. “Now we see that it’s easier to support each other and enjoy our friendship and the time we’ve been able to spend together.”

For the record, Anderson is now very much single and enjoying her life in London. “I’m so lucky to have such great work,” she told The Telegraph last year. “I’ve got a fantastic life, I have a wonderful relationship with my kids and there’s nothing lacking.”

The prospect of a new relationship, however, remains possible, with Anderson stating that although she thinks “it is better not to manipulate the situation” she is sure that she wants her next relationship “to be the one” – regardless of who that person is. “To me a relationship is about loving another human being,” she remarks philosophically, before going on to say that gender is, in her eyes, “irrelevant” when it comes to romantic relationships.

With her triumphant return to the small screen in full swing, there’s every possibility that Anderson will be too busy, “either filming or on planes or putting my sons to bed,” to find her potential soulmate. In the meantime, though, she remains content to discover everything London has to offer.

The X-Files airs on Channel 5