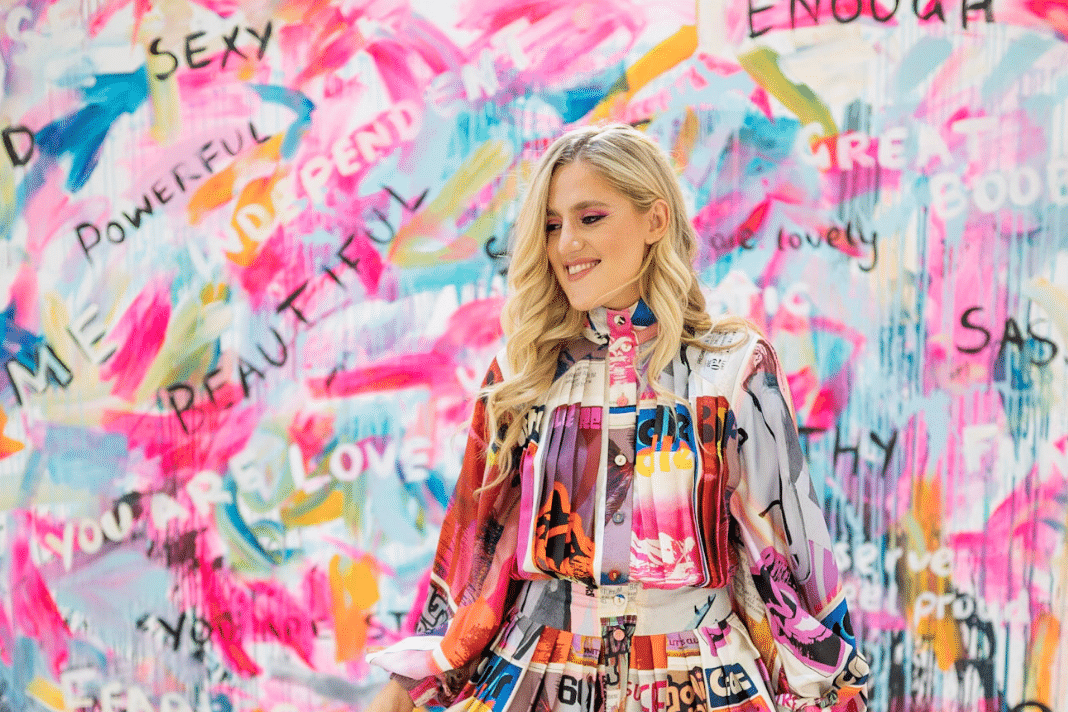 “Actually LOL that I have a shop on Carnaby! I’m still in shock that chavvy old me got here, hilarious”. This is a quote from Sophie Terry, the powerhouse behind Sophie Tea Art. I sat down with her for a chat about her new Carnaby gallery, all things nudes and her journey from ditching a job in consulting to becoming one of the biggest names in the UK art scene. Yes, she’s as cool as you’d expect her to be.

As I sat down for my Zoom interview with Sophie ‘Tea’, I can’t deny that I was a little nervous. As the TikTok sound goes – she’s an icon, she’s a legend and she is the moment. I even put a bit of makeup on for the occasion – very rare for a work from home day. This is a lady who I have followed on Instagram for several years – I’ve always been a fan of her larger than life pieces and her previous Carnaby gallery is what I want my future home to look like. 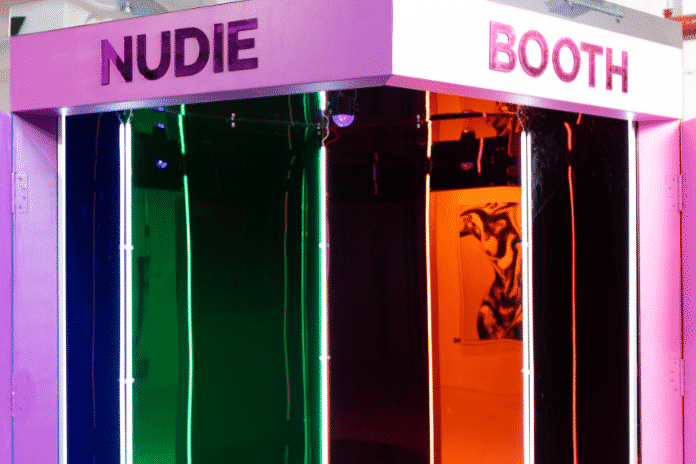 Sophie appeared on our Zoom link tightly clutching a cup of tea (no pun intended)  – you can take the girl out of Manchester, but you can never take Manchester out of the girl. A quick scroll through her Instagram stories before I hopped on the interview told me she had been running around Soho like a mad woman all morning – from gallery to press meetings, all in anticipation of her new gallery opening.

“I am kind of sad to be saying goodbye to my OG Carnaby Street location – it was my baby and I never even got to see it. My amazing team put it together for me and I will forever be appreciative of that.” Her new gallery is opening at 10 Carnaby Street, and, I am told, will be the ‘big sister’ to the previous Carnaby location. “I guess you could say we’ve grown up a lot since the opening of our first store. It was kitsch and quirky – I remember when we were setting it up we were looking at what we could get on Amazon in terms of cheap decorations. The new gallery is industrial and has more of a big time vibe about it – there’s gallery lighting, we invested a lot in the displays, worked with designers on the layout and I actually painted each piece specifically for the space. I’d say it’s just a lot more thought out.”

Of Carnaby as a location, Sophie is hooked. “I can’t see us moving to anywhere else in London now. I think people associate the brand with Carnaby – it’s our stomping ground. The shops round here are more risqué, there’s always a new pop up or event happening – it just has a really creative feel about it and it’s nice to be a part of that conversation.”

As I’m talking to Sophie, her bubbly personality and passion for her art is evident,even through a laptop camera. It’s hard to imagine that once upon a time, she had a job lined up in consulting. “I’m that typical graduate that went travelling to find themselves – however I actually did find myself. I had quite a fancy job lined up in consulting, but decided before I settled down and started that, I needed to see the world. I headed to India, which is where I rediscovered my love for painting. I asked the manager of one of the hostels I was staying at if I could paint for free, and that’s where it all started. I rang up my job and told them I wouldn’t be joining, and ended up moving back in with my mum and dad so I could build up a collection of paintings. Initially, I reached out to a number of galleries to display my paintings, but they take up to 50% commission, and I would much rather keep my money for myself! That’s how the Sophie Tea team started and I’m so glad we manage it all internally. My team are more like my friends, and it’s amazing to be able to spend every day working with people who I love.”

Before last years lockdown, Sophie travelled to Sydney, where she got stuck for 18 months throughout the pandemic. “Don’t get me wrong, London is the most amazing place. The energy, the creatives, the buzz – I love it. But I used to think London was the centre of the world, and I actually enjoyed having some time away in Sydney throughout the pandemic. I’m getting old now, my back hurts – it’s nice to be by the beach,” she jokes. “I love London, and I think in terms of the business, the press side will always sit here. But it’s also amazing to have that time to create and focus on my work whilst in Sydney. Sydney will be my base, and London will be my love!” 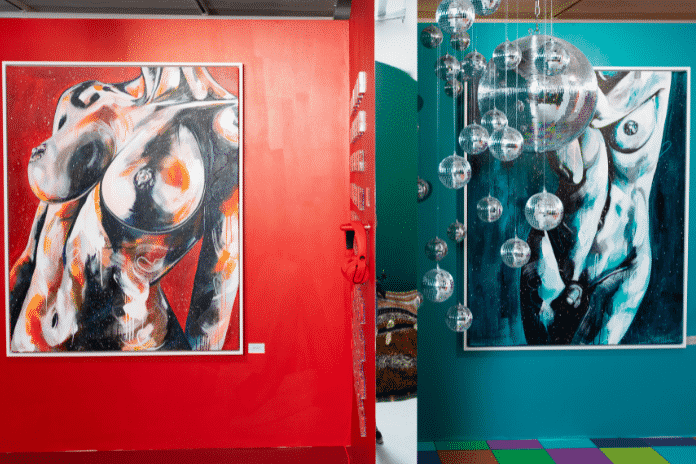 For those unfamiliar with her work, Sophie was the OG creator of the nude art trend that’s having a moment on Instagram right now. “The idea behind the Nudies collection came about two years ago. I’ve always wanted to paint nude women, and there wasn’t really anything similar on the market at the time. I was scrolling the internet for inspiration and there was just a lot of pornographic stuff on there. I had this thought to put a story on Instagram, saying ‘send me a nude and i’ll paint you’. The response was insane – we came back to over 1000 nude pictures – at the time, we thought our account was going to get reported. The stories behind each picture were incredible – we had lighthearted comments like ‘I won’t send my boyfriend a nude but I’ll send you one’, to a woman who had recently had a double mastectomy and she sent me a picture of it and explained that her mum had recently passed away from breast cancer and really wanted to be part of the campaign. Behind every woman’s body is an untold story, is what I have found.” 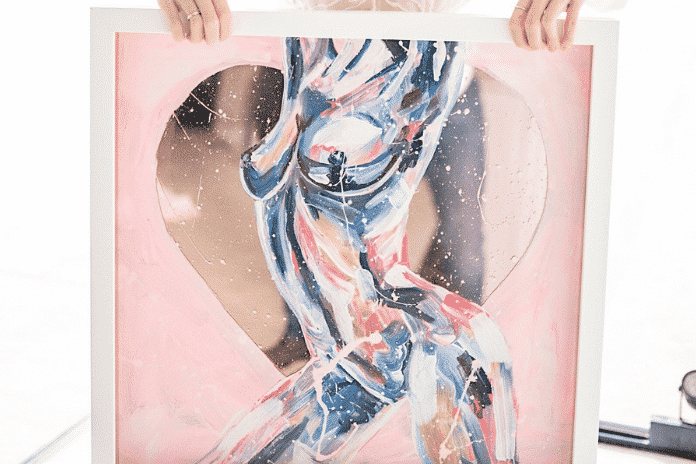 On her next project, Sophie is a closed book. “I can’t say much about it, but what I can say is that it’s going to be completely different to what I’ve done before. The Nude installment has been amazing, but it’s time for me to move on. I’m keeping my work fresh, plus there’s lots of imitations out there now, so it’s time for me to do something that’s not been done before”.

Whatever it is, we can’t wait to see it – however the boob paintings will be thoroughly missed. Fans of Sophie’s work can shop her pieces via her website, where she has put in place an instalment scheme that allows younger people to invest in her pieces for an affordable price. 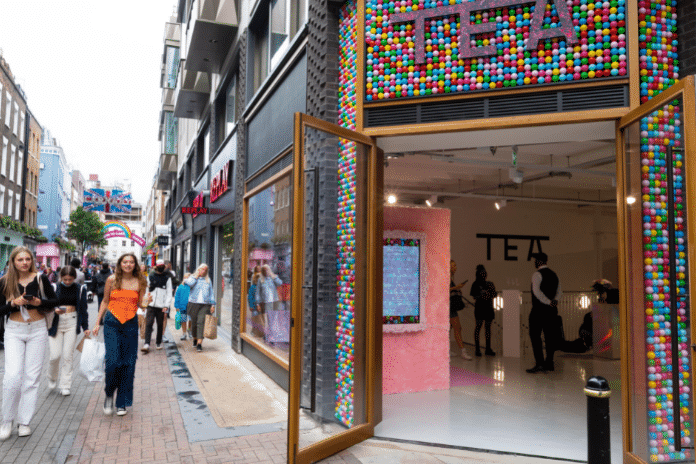 Where To Dine & Drink During The Chelsea Flower Show

Do London Fashion Week In Style

Level Up With The Luxury Of Pan Pacific London

Where To Dine & Drink During The Chelsea Flower Show

Protected: Christmas At Kew –  A botanical world filled with seasonal...