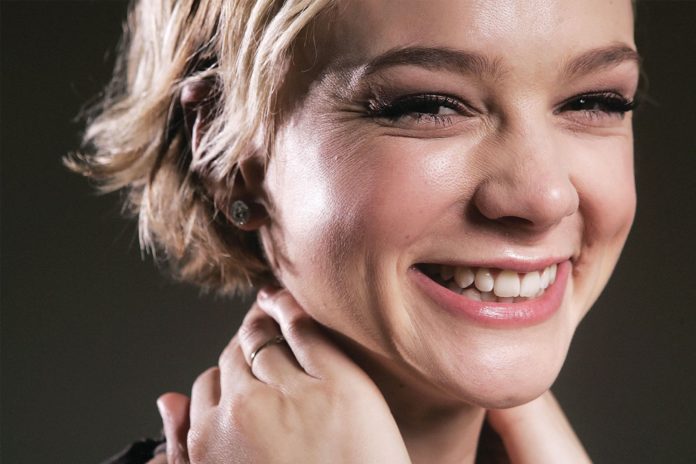 Celebrity couplings are well-publicised affairs. From Posh and Becks to Brangelina, these millionaire marriages invite the media’s scrutiny as public and private lives become intertwined, often to the point where it’s difficult to distinguish between the two. For Carey Mulligan and her chart-topping husband, Marcus Mumford of Mumford and Sons fame, the exact opposite is true: since marrying and starting a family together, the line between the public and the private has never been clearer.

Mulligan has worked with a slew of celebrated directors including Steve McQueen, Baz Luhrmann and the Coen brothers, so she’s no stranger to the glitz and glamour of Hollywood. But away from the silver screen she has always been fiercely protective of her personal life – at times enigmatically passive, at others staunchly forthright in defence of her privacy.

Mulligan’s breakthrough role came in 2009 as schoolgirl Jenny in Lone Sherfig’s An Education. The character was similar in some ways to Mulligan herself (both excelled academically, for one thing) but the fame that came with the film’s success was, as Mulligan later told The Guardian, “all a bit terrifying”.

Having confessed that she “doesn’t have a public persona”, the trials and tribulations of celebrity status, not to mention the ever-present paparazzi, were a constant “nightmare” for Mulligan. She struggled with photoshoots and award shows, once describing the Academy Awards as “overwhelming and glamorous and not really me at all” – and yet now, at the age of 30, it appears that this English rose is finally beginning to bloom.

“I feel more sure of myself,” Mulligan says. “I was very reticent when I was younger but now I have greater confidence in my work and I’m much better at getting my view across when I’m speaking to directors. I used to be so shy that it made it difficult for me to enjoy whatever success I had, but now everything seems fabulous and promising… although there are still times when I have to pinch myself to make sure that it’s not a dream!”

Staying grounded as a Hollywood starlet is in itself a feat worthy of admiration. Both Mulligan and her husband have developed reputations based around their respective work rather than any sense of tabloid scandal or over-inflated egos. Mulligan is of the opinion that “the minute you get to be like ‘look how famous I am’, you should give it up,” adding that as Mumford is “the only thing” that’s entirely hers, she does her best to keep their relationship “totally away” from the limelight. Family friend Sienna Miller has described Mulligan and Mumford’s marriage as “idyllic”.

“They both come from very solid families and have a real sense of the life they want to live,” says Miller. “Marcus can headline Glastonbury and Carey can be nominated for however many Oscars, and then they come back to their farm and they’re in big woolly jumpers, raising piglets – it’s an amazing balance.”

Mumford has been present in Mulligan’s life since they met at a church youth camp and became pen pals; they reconnected in 2012 when they were both involved in the making of Inside Llewellyn Davis and were married in a matter of months. Mulligan told The Guardian that she feels “more settled and more secure than I’ve probably ever been” since getting hitched. For the girl who “had a great childhood” but “wasn’t ‘in the group’”, her marriage to Mumford has cemented her place within the upper echelons of British celebrity, regardless of whether that was her aim.

Mulligan’s last cinematic outing was Suffragette, which she describes as a valuable opportunity to learn more about the history of feminism, a cause close to her heart. It was also a chance to work with “inspiring” fellow actors such as Meryl Streep.

“It’s nothing new for me to admit that she’s my heroine,” says Mulligan. “It’s not just her incredible ability and talent; she also uses her position for notable causes.”

Mulligan, too, has philanthropic interests. In 2010 she donated the Vionnet gown she wore on the red carpet of that year’s BAFTA ceremony to Oxfam in order to raise money for a series of women’s projects. In 2012 she became an ambassador for Alzheimer’s Society; her grandmother’s dementia is one of the few elements of her family life that Mulligan discusses with the media.

Speaking at a society event, Mulligan said she was “committed to helping the Alzheimer’s Society in any way” she could. “My family and I rely on the help of organisations like Alzheimer’s Society to help us understand the disease and guide us in the care of my grandmother,” Mulligan explained, adding that she thought it was “a privilege to meet so many people with dementia”.

More recently, the actor has become involved in helping the charity War Child, and has been vocal about the struggles faced by children whose lives have been affected by war in both the Democratic Republic of Congo and Syria.

For Mulligan, seeing the suffering of children who were around the same age as her own baby daughter, Evelyn, had a profound effect on her. “I look at my daughter and think, this is so exciting: you could be a doctor or a lawyer or an engineer,” she told ITV News in 2015. “These parents in Syria, they had those same feelings, and now that’s gone.”

Such public comments about Evelyn, born in September last year, are exceedingly rare. Despite widespread speculation from the media and fans, Mulligan is committed to staying tight-lipped, saying that when people ask her “all the time” about her daughter, she demurely replies, “Oh, I can’t, I’m sorry,” in what she describes as “a very British way”.

For Mulligan, who has seemingly made a habit out of taking regular breaks from the rigours of film-making, last year’s pregnancy and birth while starring in two movies, Far From the Madding Crowd and Suffragette, and the stage show Skylight was, by her own admission, “pretty stressful”.

“Doing press with a tiny baby means timing has been very important and babies do what they want, which is a challenge,” Mulligan told The Mirror. She did, however, have a secret weapon when it came to juggling her duties as a celebrity and a mother: “It’s really helpful when you have Meryl Streep backstage at events, shouting at people on your behalf and telling them to hurry up because you have a nursing mother here.”

To find out more about these charities please visit:
alzheimers.org.uk
warchild.org.uk