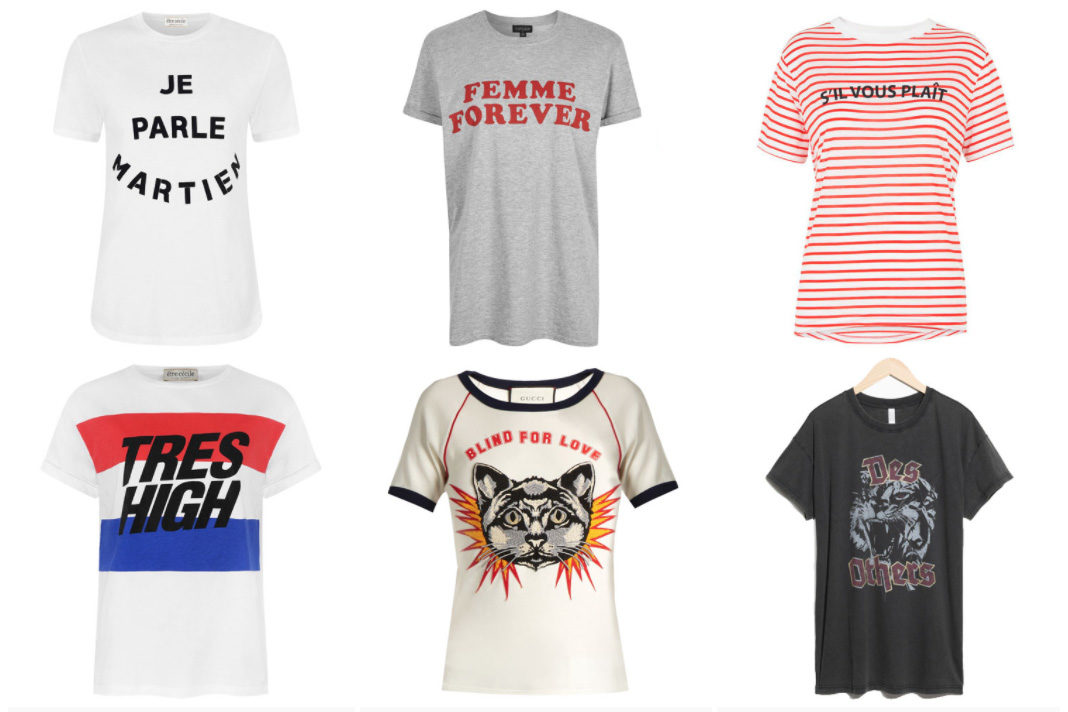 ‘WE SHOULD ALL BE FEMINISTS’ hollered Maria Grazia Chiuri’s slogan tees on the Dior catwalk. ‘GIRLS JUST WANT TO HAVE FUNDAMENTAL RIGHTS’ yelled Prabal Gurung. ‘SUCK ON MY TOE PHOEBE PHILO’ screamed a tee at Henry Holland. Whether it was feminism, gender politics or Phoebe Philo’s toe, fashion was all about the slogan this season.

With the SS17 and AW17 runways awash with charged statements, it seems like the industry was responding to the turmoil of the current political landscape. Fashion week consequently became an election campaign for each designer, plastering slogans on models who became walking manifestos.

So, now no longer an object of novelty, the statement tee has taken on a whole new role in the wardrobes of fashion-lovers. Due to the renewed love for 90s-inspired logos, the slogan tee has become fashion’s opinionated older sister. The new tee should deliver the same brand of stylish simplicity as a well-cut shirt. To avoid any cutesy connotations try pairing yours with smart tailored trousers and blazer, or tucked into floor-grazing maxi skirts for an anarchic twist a la Dior. It’s all about mashing daywear with evening. Just think of it as your spring summer wardrobe staple.

High street and designer are both plentiful resources for slogan tees. Our current fashion brand hero is Etre Cecile who deliver stylish tees, sweaters and tops emblazoned with French phrases. Spotted on countless insta stars and fashion insiders, their Je Parle Martien T-Shirt is at the top of our wishlist for this season.

In conclusion, in the words of interwar fashion designer Elsa Schiaparelli: “In hard times fashion is always outrageous”. Who are we to argue?

So on that note, we’ve rounded up the best slogan tees to buy now. They might not be as politically charged as those on the runway, but they pack no less of a punch…

The Cavendish Clinic is Coming to John Lewis