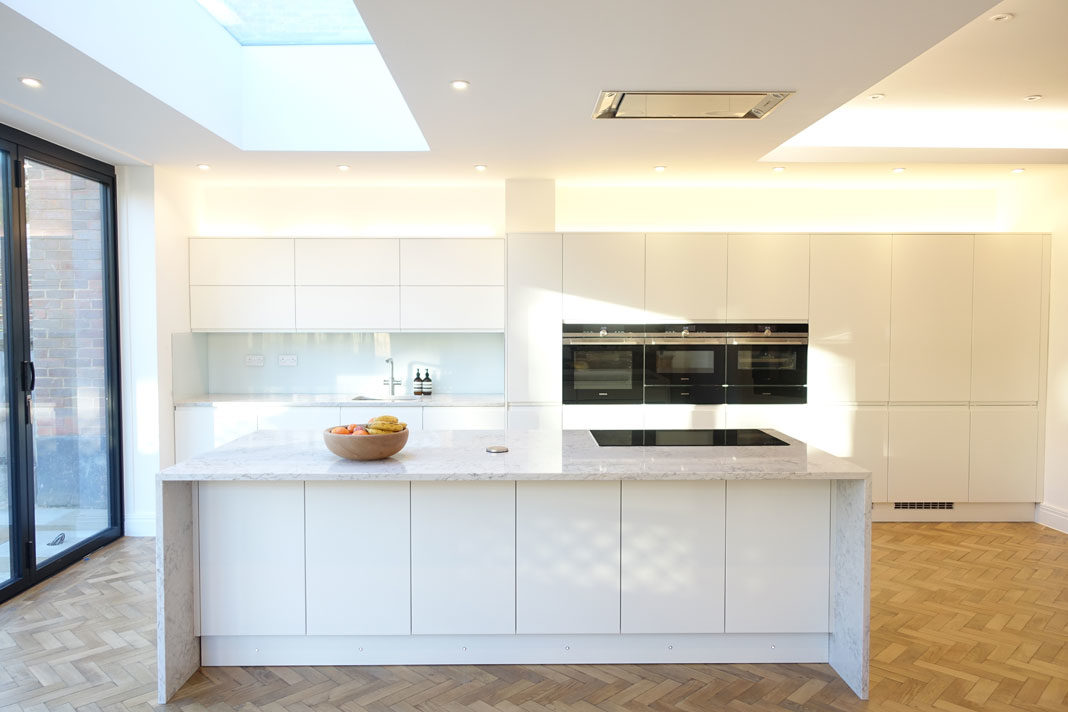 The kitchen is the heart of the home, as the team at Sheraton Interiors is well aware

With a beautiful bespoke kitchen, you can create a stunning functional space. Renovating a kitchen in an existing property can instantly transform your home. Creating an entirely new space from scratch means you can achieve the exact finished aesthetic you desire.

The brief was to design an open-plan kitchen-cum-dining area in a new extension using the natural light and garden views. The aim was to develop something contemporary and streamlined. So the client opted for a German design, one of Sheraton’s specialist areas. This kitchen encompassed a sleek and practical layout. It was complete with a built-in oven, compact oven and warming drawer. A full height fridge and a separate full height freezer were installed in keeping with the integrated look and feel of the space.

The designer suggested putting slim-framed, bi-folding sliding doors that lead out to the patio and skylights to tackle the lighting and views. They also opted for a dropped ceiling with LED uplighting to ensure chic and even coverage lighting indoors. 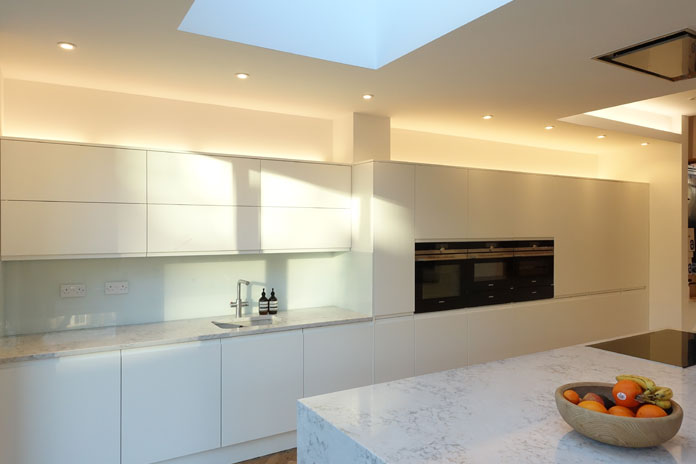 They added tall larder units to provide extra storage and organisation, keeping the central island free for meal prep and cooking. This island became quite a feature in and of itself, complete with a slim wine cooler.

The client requested incorporated seating to allow for socialising and family time while cooking and using the island. This was implemented along with a push-up socket to charge laptops, iPads, iPhones and kitchen appliances.

Other features include an integrated dishwasher, a three-in-one filtered tap providing boiling, hot and cold water. LED plinth lights in the central island and LED lights under the bi-fold wall units were also featured. The sink was custom-made in Spain by Silestone using the same material as the quartz countertops. The glass splashback behind the sink was painted in a custom Farrow and Ball white.

The project took just over four weeks to complete. This was due to the new flooring being reclaimed oak sourced from an old church and therefore needed to be acclimatised. For a total project cost of £25,000 – £35,000 excluding building work, Sheraton was able to provide the client with a personalised, practical and visually compelling kitchen for them to enjoy for decades.