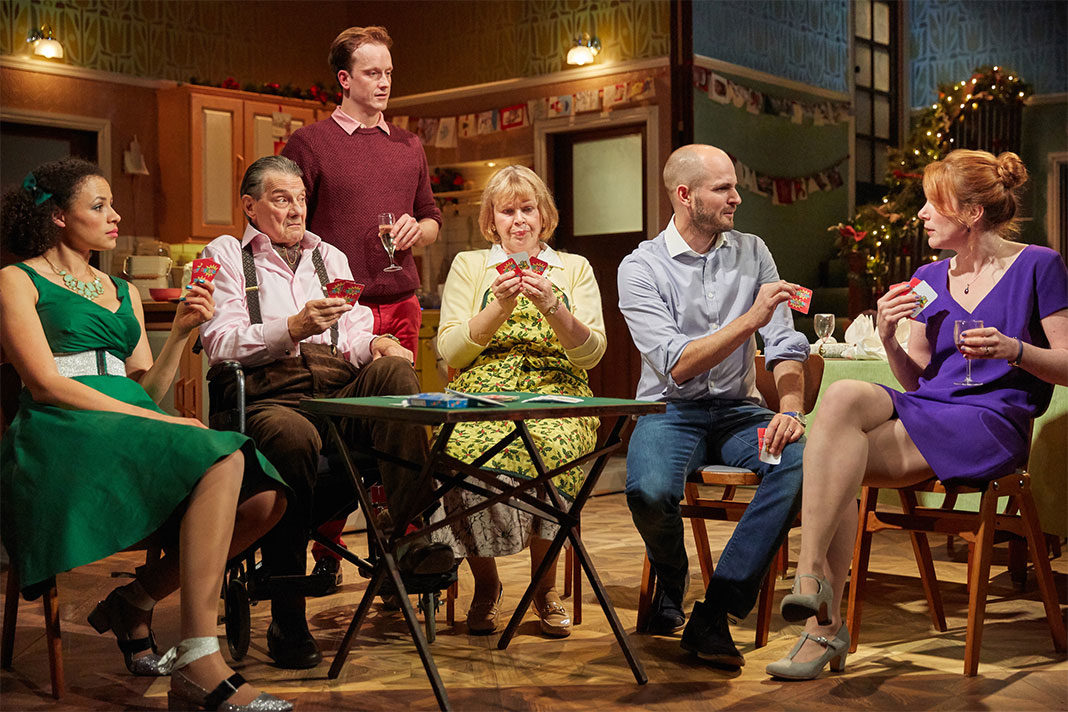 Rules for Living takes an inside look into the dramatics of Christmas Day, and how one family deals with the anxieties they each face

Christmas Day requires many preparations: decorate the house, wrap the gifts and, the main event, prepare dinner. But when it finally comes together, the celebration is incredibly…stressful. With battling personalities and predetermined familial roles, it can be difficult to keep the holiday a jolly one for everyone. Often, in attempting to do so, the situation will spiral out of control and lead to a more tense atmosphere. In Rules for Living, one family must learn to respect the feelings and emotions of others without leading to a complete breakdown.

Carlyss Peer and Jolyon Coy play Carrie and Matthew in this comedy. Matthew has brought his girlfriend, Carrie, home to meet his family for the holiday. She is thrust into an unknown world and aims to please those who may very well be her family one day. The actors create a world of hilarity while undergoing trials to ensure they each follow their dedicated rule.

So what are the ‘rules’ for living? Each person has a specific mould to fill within the family. These are then translated into a ‘rule’ that dictates how one acts in that environment. “It is the stereotypical behavior in how we cope with difficult situations,” explains Peer.

Playwright Sam Holcroft wanted to explore how cognitive therapy allows people to cope with social constructs as well as family dynamics. Cognitive Behavioural Therapy (CBT) is not something people are expected to walk into the theatre understanding, or even knowing about. Peer admits, even she came into the production without a complete idea of the concept.

CBT focuses on managing issues by changing the way individuals think and react to a situation, attempting to break free from a negative pattern of thought. The actress says the performance helps the audience move forward knowingly. “It is a way for audiences to consider how they react to and handle these situations,” she says, as it paints an accurate portrait of the mental health practice.

An evening at the theatre is turned into a therapy session of sorts. Though seemingly a farce, the dramatisation could easily be translated into a deeper reflection of the mind. “The brilliant thing is that it goes to the nth degree,” Coy says, commenting on the second act in which the storyline goes down a path of destruction. “You see what happens when it all explodes. In family and life scenarios we have roles to fill and we play up to them. It is interesting, even a bit sad, to see the many levels and layers that are well observed,” he continues.

These rather hostile rules uniquely come into play. Presented in a game show-esque style, each character has a series of actions to follow which corresponds with their reactions to a situation. “Everybody’s rules are their coping mechanisms,” explains Coy. For example his character, Matthew, must sit to tell a lie. Each character has their designated response. However, none are able to register their notable action in the universe they inhabit. The rules are projected on a screen as the scene unfolds.

The actors say they find it incredibly satisfying to have this interaction with the audience without breaking down the fourth wall.“You can feel them from the stage come to grips with all the bits and pieces,” says Coy.  The fact that the audience understands more than the characters enhances the theatre experience and the humour of the storyline.

These peculiar rules not only wreak havoc within the family dynamic on stage, they also presented a huge complication in creating a successful production. “Sam said everyone would go a bit mad during the rehearsal period, and he was right,” says Coy. The specificity of the rules puts pressure on the actors to ensure perfection in every movement on stage. During rehearsals there was a heavy focus on creating a natural and seamless production, which proved to be quite difficult as each move is choreographed around particular rules. “We reached the point in rehearsals where our brains were really frazzled,” says Peer. However, she says director Simon Godwin did well to control the madness.

One of the most challenging scenes, Peer says, was when the family joins in a card game. Not only were they engaged in acting, they also had to make sure they were playing the game properly so as to keep it as natural of an interaction as possible.“We all sat down and played the game ourselves to try and situate it beforehand.” She recalls it ended up being a bit of mess, as it was just as confusing trying to play it without the added pressure of memorising lines and movements.

When it is all said and done, the comedic factor of the production is the star player. “When I first read the script it made me laugh out loud,” says Peer. The rules, erratic family dynamic and ultimate food fight create a brilliantly funny spectacle. Coy proudly states, “It is an opportunity to come to the theatre and properly laugh.”

Be sure to see Rules for Living at Rose Theatre Kingston
7 – 18 November
24-26 High Street, KT1
rosetheatrekingston.com