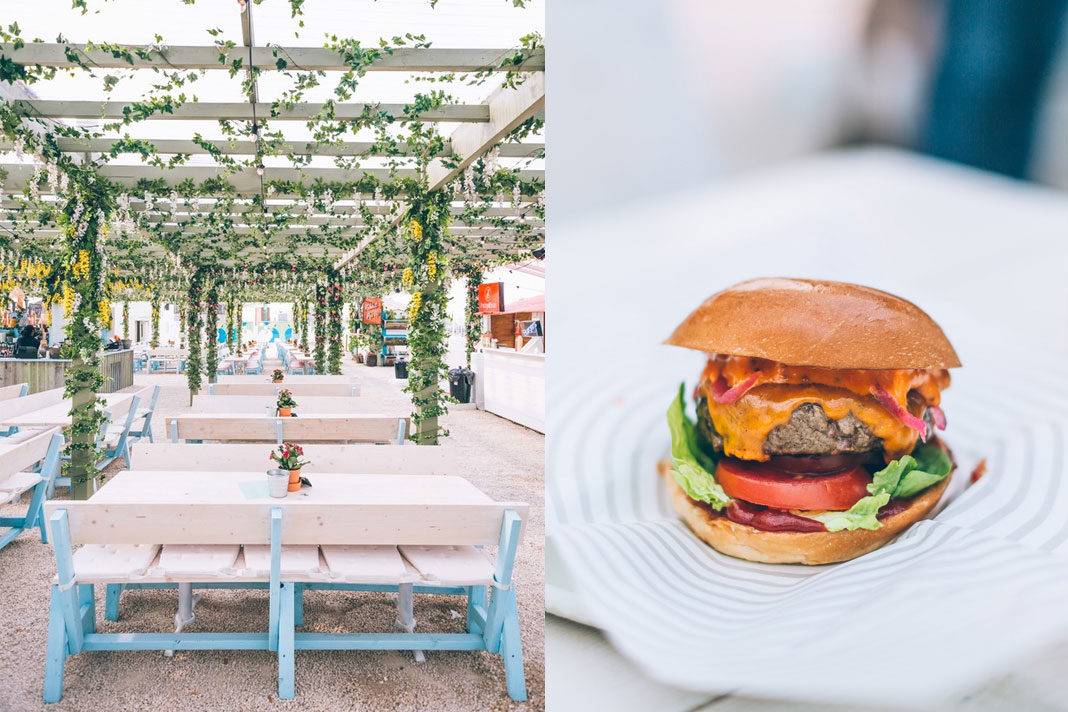 Absolutely’s favourite eateries
and bars with a view


Most multi-functional spaces have a complete identity crisis and fall apart. Netil360, however, is the exception to this rule. Popping up and down in the same space for the past two years, the rooftop has recently undergone a full refurbishment and is now a fully functioning workspace, cafe, gallery and bar. Attracting the creative crowd, people turn up with their laptops at lunchtime and stay until the sun sets. This is all made possible with free wifi, charge stations and, of course, beer.

Stocking some of the most local drinks (draft from Five Points in Dalston, spirits from East London Liquor near Victoria Park) the bar actually supports the kind of people who come to work, drink and play here. Going one step further, an artist a month is chosen to showcase their work in the bar’s micro-gallery while workshops – such as the Grace & Thorn flower arranging class – bring yet another dynamic to the roof.

Closing a little too early for our liking (10.30pm) we recommend heading here early and following it up with drinks the bar below, NT.

Pergola on the Roof – White City


There’s a distinct lack of pop-up roof terraces in West London. Pergola on the Roof is one of the first and it’s proving to be very popular with a month-long waiting list for table and sofa reservations. Thankfully this doesn’t mean it’s all over for you, walk-ins are accepted but you might have to queue.

One of the reasons behind the roof’s great popularity is, undeniably, the location. Taking over the old BBC television centre’s car park, the concrete wasteland has been transformed into a vision of the med with tanned people lounging around on large white day beds, drinking rosé and playing french boules.

Under the ivy–adorned pergola itself, groups sit along communal tables eating food from one of the four restaurant stands. Impressively, Rabbit, Salt Yard, Patty & Bun and LeCoq have all taken residency up here so, rather unsurprisingly, the food is really very good. Big and dirty, LeCoq’s pork belly roll with crackling and Salt Yard’s chorizo and piquillo pepper roll with alioli and rocket are both delicious. While the courgette flower is too heavy with honey, all other food is spot on so this is definitely more than just a cool space with style.

Buzzing with the celebratory spirit Londoners in the sun, Pergola on the Roof has some serious vacation vibes so head up here when you wish you weren’t in the city – you’ll feel so much better.

One hundred feet above Kensington High Street sits London’s very own Hanging Gardens of Babylon. From outside you wouldn’t think it but up here three parks span over 1.5 acres and include a private members club and restaurant. The Grade II listed garden even includes an woodland that is home to a variety of exotic birds and four resident flamingos.

Food-wise, seafood on The Terrace is really special with tables overlooking the London skyline. Try the roasted scallops with Jersey Royal potato sauce, chorizo and fried capers or the deep fried courgette flower with chutney, broad bean hummus and spiced lemon ricotta. If you want something bigger, the confit salmon supreme with charred cucumber fondants and seaweed tartar butter is very good.

For the cooler summer nights, the terrace is heated while blankets and hot water bottles are given to those really feeling the chill. Making the most of the drier climes, the English National Opera and Musicians Inc bring their classical and world music into the gardens with live performances.

On the tenth floor of the uber chic ME hotel, The Strand, sits one of the city’s most impressive bars. With a 360 degree view showcasing every London skyline landmark – Tower Bridge, The Shard, St. Paul’s and the BT Tower to name but a few – this is the place to go when you want to impress.

Designed to evoke memories of balmy Ibiza nights with white sofas, blankets and lanterns in abundance, we actually recommend going there for a boozy brunch. Why? Because the Bloody Mary Bar is back with it’s impressive selection of tomato juices, spices and garnishes. Each drink is made to your exact specifications so you’re bound to find the perfect hangover cure. Breakfast is equally as good – ricotta pancakes with banana and honeycomb butter is indulgent and delicious while the buttermilk chicken with waffles and maple syrup hits the spot between sweet and savoury.

If you’re after more of a party, the hotel rooftop is open until 2AM and the cocktails includes some amazing summery drinks such as the Mexican el Jimador, cucumber, mint and agave. At £13 a pop, this high end rooftop isn’t cheap but you’re paying for the exclusivity and, of course, the spectacular view. It gets full so book in advance.
226-337 The Strand, WC2R; radiorooftop.com

From the team that bought us Design My Night’s “Best Pop-Up in London 2015” this venue is sees an old rooftop turn into a 1980s playground with palm trees, pastel coloured beach shacks and an impressive amount of sand.

As a rather brilliant Miami Vice x Saved by the Bell parody, DJs play funk, soul, house and 80s pop while special events include Sunset Disco Yoga, rap karaoke and film screenings. With street food vendors such as Lucky Pierre serving steak frites – onglet with béarnaise and watercress – and Other Side, the honey butter bun – buttermilk fried chicken with smoked honey butter, bacon, slaw and pickles – the options on offer will impress any foodie.

Special events are taking place throughout the summer but we’re particularly looking forward to the Brixton Rooftop Beach Carnival that will be bringing Caribbean jerk chicken, rum and reggae to the boulevard. Open from Thursday-Sunday, the beach is a place where you’re meant to cut loose so head here when you’re feeling full of energy and want to dance. This is the summer’s party venue.