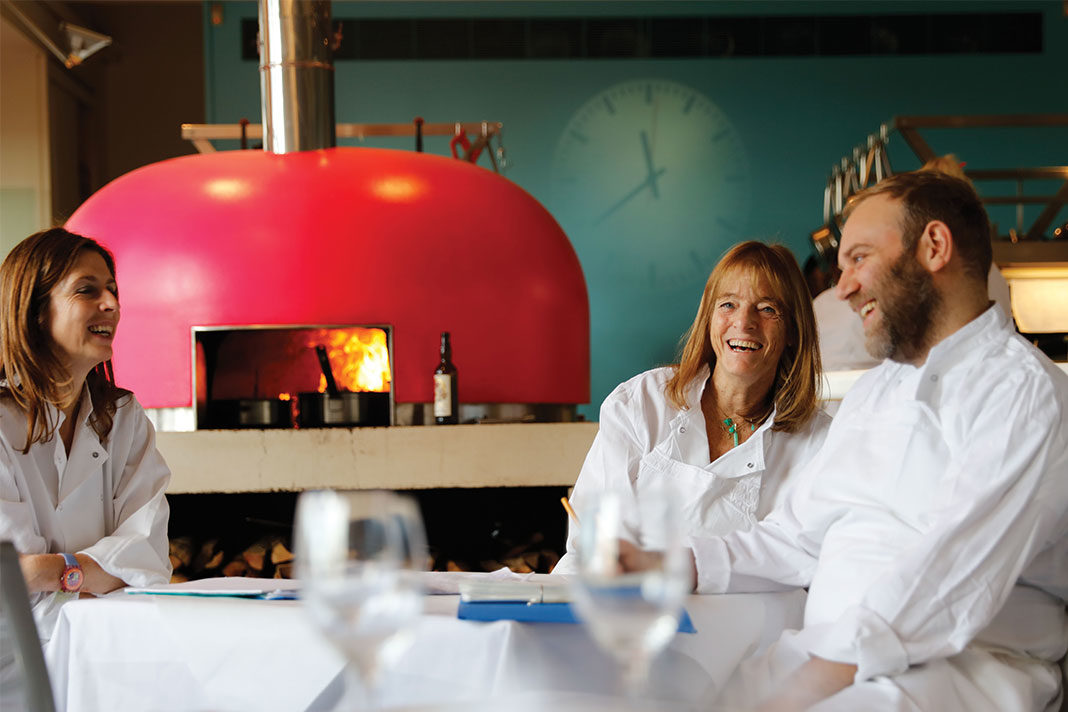 The River Cafe at 30

I wanted to tell her about a space that had come up in Thames Wharf where Richard Rogers and Partners had just bought a group of warehouses to convert into offices for their architectural practice.

We met on the Kings Road at Drummonds, which today is McDonalds – so you could say that The River Cafe was actually conceived in a McDonalds. After the coffee, we went to look at the space available. There were three floor-to-ceiling windows facing south over the Thames and room enough for nine tables. There was a communal garden in the middle. We imagined a vegetable and herb garden. We fell in love with the place, in love with the idea. And so it began.

Rose, Richard and I became partners. Richard did the drawings, the lights came from the Reject Shop, chairs from Habitat and second-hand ovens from a yard in Coventry. Rose’s husband the artist David Macilwaine, who worked with wire, designed our logo. My brother Michael had our menus printed onto baseball caps and tshirts, which he sent us from LA.

We called it the River Cafe. The imaginary garden became real and we planted wild rocket, the seeds from a holiday in Tuscany. Our children worked with us – Rose’s and mine. Bo was three.

If restrictions can drive creativity then we definitely had ours. The Hammersmith planners allowed us to be open only at lunchtime and only available to the architects, designers, model makers and framers who worked in the warehouses – people who usually had nothing but a sandwich for their lunch. We made hamburgers, but with mayonnaise using extra virgin olive oil and sandwiches with taleggio and rocket. We also made Papa Pomodoro, which no one ate. As one customer said, ‘I’m not paying £3.50 for some stale bread and tomatoes.’ We grilled squid and put it with rocket and fresh red chilli. It has been on the menu ever since. We found a recipe for cake and called it Chocolate Nemesis.

The only thing we didn’t make was money. With every sandwich and leftover soup our overdraft increased. The worst day was when a girl came on her bicycle selling sandwiches to all the offices for 25 pence cheaper than ours. We told her she was trespassing and asked her to leave.

Actually, we were also treated as trespassers. A petition was sent to the council, signed by 100 people, complaining. ‘The River Cafe and its clientele are seriously diminishing the tone of the area.’ Fortunately, we also had our fans. Fay Maschler wrote a review saying, ‘I am going to tell you about a restaurant run by two women with no professional experience, miles from anywhere, that you are not allowed to go to.’

Word spread. We stopped the sandwiches. We were allowed to open to the public. A year later, to open at night until eleven. Finally, we became a restaurant.

Using a little butter and some grated Parmesan, coat the bottom and sides of a 30cm springform tin. Shake out any excess cheese.

Finally, fold in the Parmesan.

Spoon the mixture into the tin and spread the olives over the top. Bake for 20 minutes. The torte should rise and have a brown crust but still be soft in the centre. Serve after 5 minutes.

We were all together in Venice one summer and had this antipasto at Da Ivo.

Cut the artichokes finely and season them well.

To prepare each artichoke, first cut off some of the stalk, leaving about 5cm attached.

Cut or break off the tough outer leaves, starting at the base, until you are left with the pale inner part. Then peel the stalk with a potato peeler, leaving only the pale tender centre.

Trim the pointed top of the artichoke straight across, which will reveal the choke. Remove the choke with a teaspoon. Slice the artichoke vertically as thinly as possible. As each artichoke is prepared, drop it into a bowl of cold water with half of the lemon juice.

Combine the white and brown crabmeat with the parsley, remaining lemon juice and the extra virgin olive oil. Season with sea salt and black pepper. Drain the artichokes and stir lightly through the crab to combine.

Season again and finish with a drizzle of extra virgin olive oil.

Put the lemon and dried fennel stalks inside the cavity of the fish.

Place the salt in a large bowl and add 250ml water. Cover the bottom of the baking dish with half the salt and lay the fish on top. Cover the fish completely with the remaining salt.

Bake the fish in the preheated oven. After 20 minutes, insert a skewer into the fish. If the tip of the skewer feels very hot when pulled out, the fish is ready.

Crack open the salt crust and remove the hard pieces, ensuring that no salt remains on the flesh of the fish. Carefully lift the fish and place on a platter. Remove the skin.