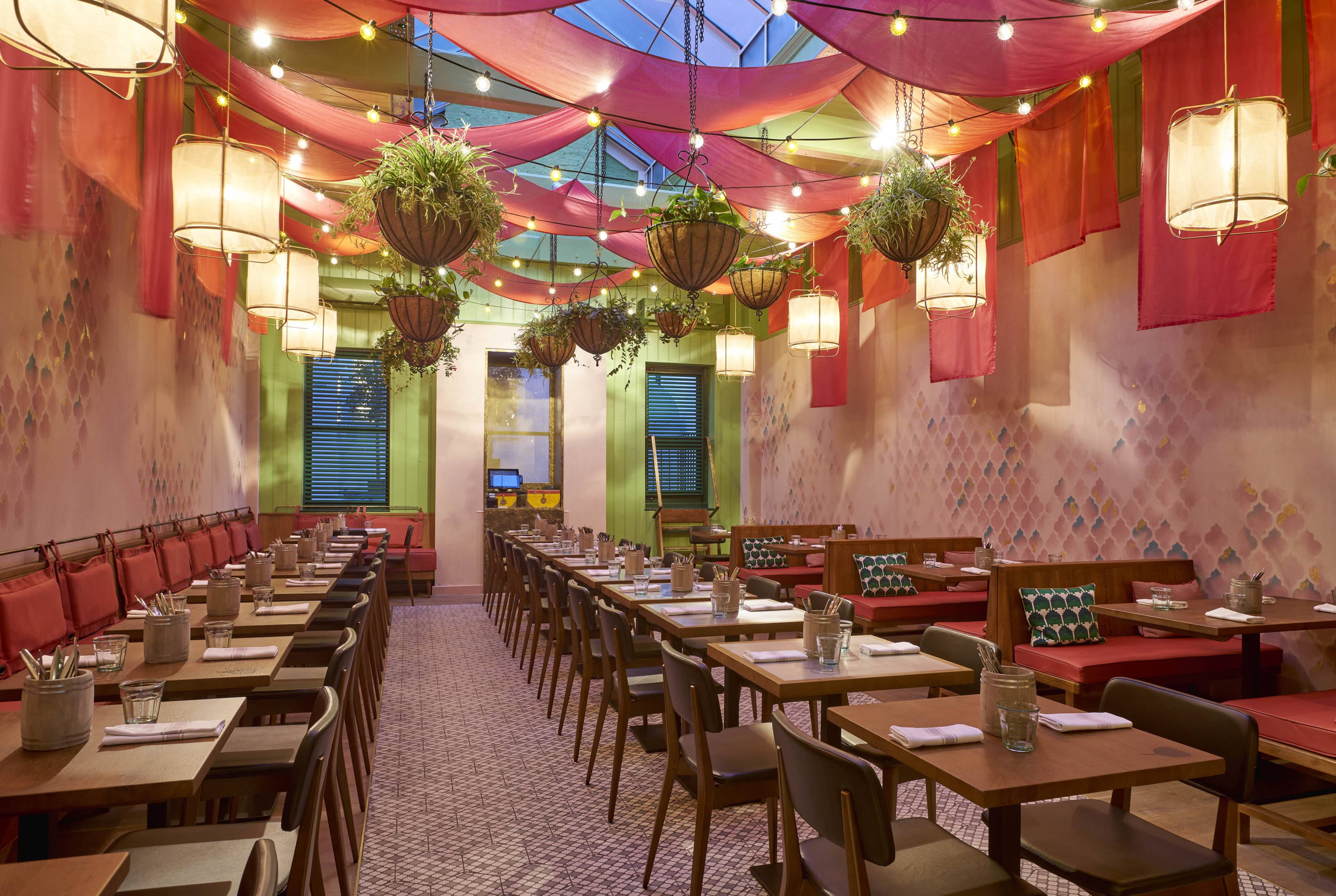 Nestled in the heart of Covent Garden is a modern Indian restaurant that makes you feel as if you have wandered into a side street bazaar in Old Delhi. Guests are immediately greeted by an abundance of colour: a lime green door, baby pink walls and an abundance of ferns and fairy lights cover the walls – it’s an Instagrammers paradise. There are subtle nods to the heritage throughout the restaurant, from the brightly coloured teapots to the pink drapes that adorn the ceilings.

Whilst the Indian cuisine scene has come a long way in London throughout recent years, few manage to do what Chef Vivek Singh – owner of Cinnamon Bazaar alongside Cinnamon Kitchen and The Cinnamon Club – has achieved. The variety of menu choices served up at Cinnamon Bazaar ensure the venue is a place reserved for late night dining, but also for lunching, cocktails, afternoon tea and catch ups over chai.

The menu is vast, featuring an A La Carte menu, as well as set lunch and dinner menus, an afternoon tea menu and a chaat and chai offering. Today, I am here for a catch up over lunch, so we are offered the A La Carte menu. There are a range of snacks and chaats available, which could act as small plates for guests wanting a lighter lunch. Highlights include the watermelon chaat, spiced ‘bullet’ chillies and the house curried popcorn, a sweet yet spicy snack that I was particularly fond of, much to my surprise but not to that of the attentive host that recommended I try it.

For main, I opt for the Old Delhi Style Butter Chicken, whilst my guest went with the Keralan beef Ishtew. The butter chicken may seem a slightly mundane option to some, however the taste was anything but. Rich and creamy with just the right amount of spice, the chicken is tender and full of flavour. My guest, a particularly unforgiving foodie, tells me her dish is one of the best she has ever tried.

As far as drinks go, the cocktail menu – that has been expertly crafted to compliment the food menu – further pays homage to the Indian culture with an array of spices featuring in many. The Bazaar Old Fashioned, an Indian twist on a classic cocktail, features Coconut-washed Indian scotch, coconut sugar and burnt cinnamon – a sweet combination that delivers a bit of a kick. Those wanting to embrace their inner child should choose the masala cola float, an adult blend of aged rum and karma cola topped with a delicious masala flavoured ice cream.

Their carefully curated Afternoon tea menu is sure to be an unique option for upcoming Afternoon Tea Week (10-15 August), inspired by Vivek’s roots in Kolkata, West Bengal. Guests should try one of the impressive Jing tea offerings, from White Peony to Organic Jade Sword Green. Nibbles will include finger sandwiches and spring rolls alongside vegetarian alternatives.

Those who have previously dined at one of the Cinnamon Collections offering will be familiar with the high standard of food and service, and the same can be said for Cinnamon Bazaar. The cosy, welcoming interiors, combined with the effortlessly bold drinking and dining options make it the perfect all day dining location.