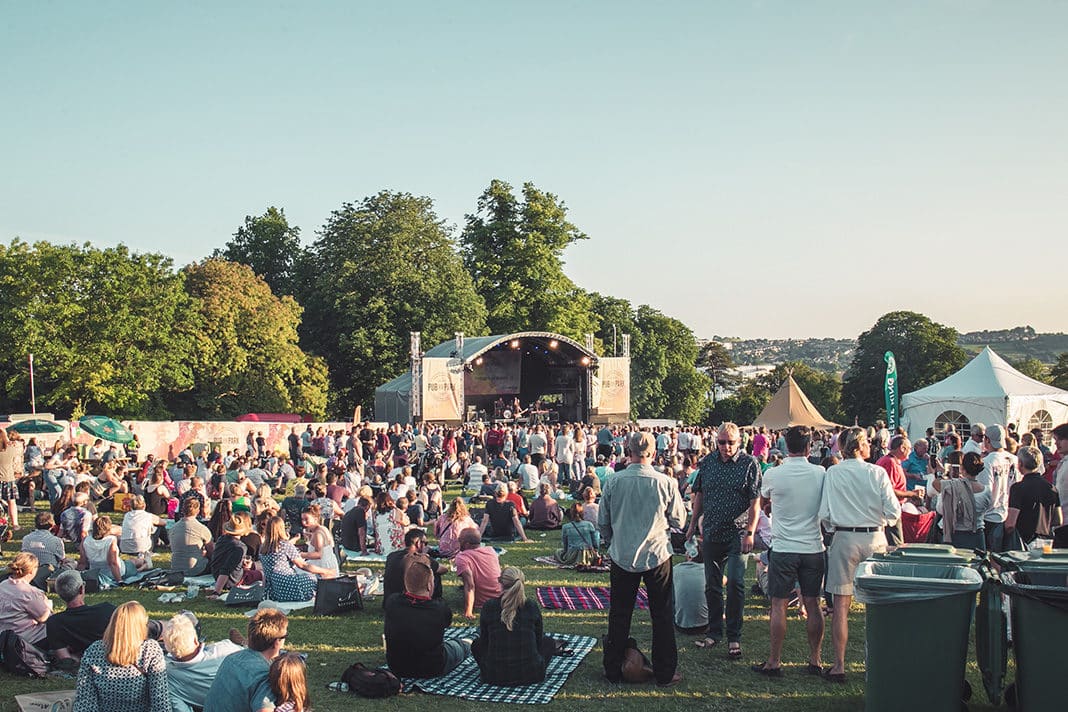 Pub in the Park is back and it’s bigger than ever. We caught up with Tom Kerridge to talk about Michelin stars, diets and how to get children to eat their greens

Tom Kerridge is sitting at a grand table in one of the private dining rooms at Kerridge’s Bar and Grill, his glitzy London restaurant in the Corinthia Hotel. This year, Pub in the Park, the touring food and music festival kicks off in Kerridge’s hometown of Marlow and culminates four months (and eight venues) later in St Albans. So why has the Salisbury-born chef decided to give up a third of his year to entertain his family, friends and 18,000 other people? 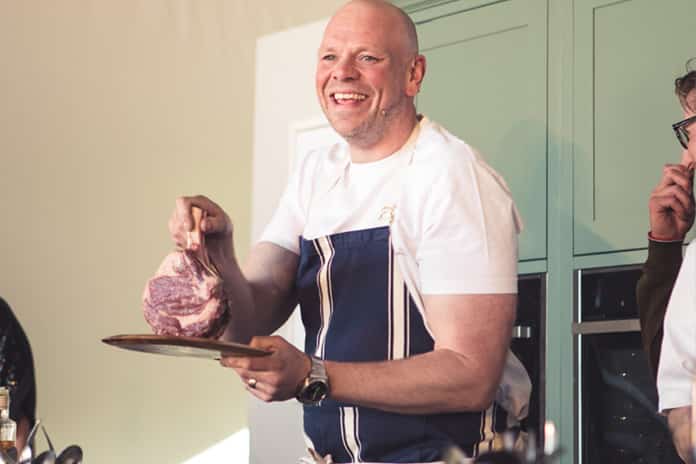 The answer, it appears, is simple: “It’s a lot of fun.” He tells me it’s all about maintaining the vibe and making sure everyone’s having a good time behind the scenes, “The chefs all drink loads of beer, eat tons of food and get to hang out with their families. If they’re all having a party, it’s just like inviting 18,000 other people to join in,” he says. 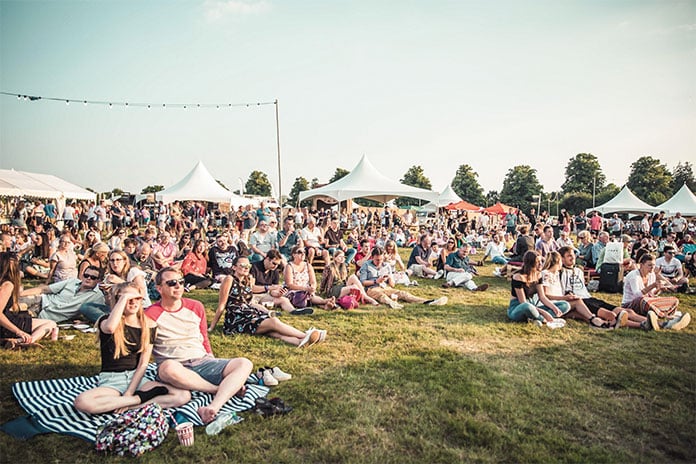 “When you walk into your favourite pub, you know what to expect. It’s important for us to replicate that with Pub in the Park. We didn’t want to risk changing it entirely by making the event too big.” Instead, they’re taking the event and putting it on in locations across the country. “Like with everything, you just get a bit better the more you do it.”

I’m interested to know how involved Kerridge is in curating the festival. “On the food side, I bring people in. I’m the one encouraging them. They’re all friends and those who’ve done it (the festival) before all want to come back. They recognise that mixing with young chefs is great for the industry, and although they’re working, they really do have a great time. 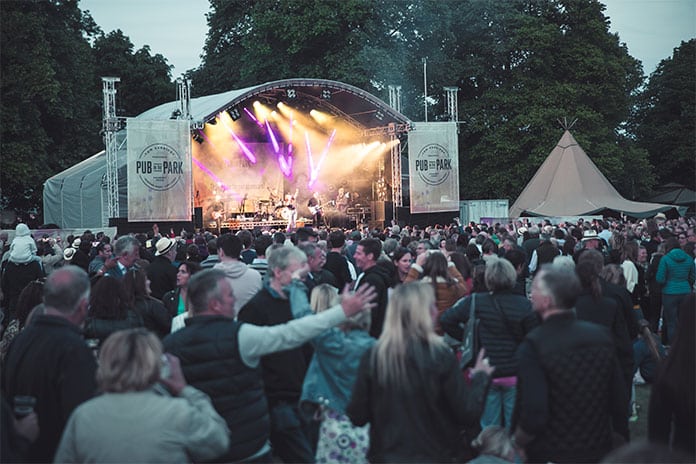 “In terms of the music acts, I do throw a few names in there… Some get through, some don’t. But this isn’t a house music festival or Indie festival, it’s a pub garden festival. Lots of people who like eating different things, so the music has to be the same – it’s eclectic and energetic, with songs you know and can sing along to. That’s what really brings the energy. When you walk into a pub, if the staff are having fun while they work, you know you’re going to be having a good time. If everyone’s miserable you just want to leave.”

“It’s the same here,” he says, gesturing around the room, “Everyone’s working really hard but they’re having a good time.”

Kerridge famously lost over thirteen stone and is a champion of healthy eating. I want to know how he manages his own diet in the face of an undeniably heavy workload, “I’m conscious of what I eat. On the way to the gym I have two apples and protein shake with coffee, but it’s so early you’re forcing the apples into you… I got here, had some yoghurt and fruit…” He trails off, understandably, he seems bored by the question. “It’s all related to physical exercise, it’s about what I’m doing in the day.” A food as fuel outlook, perhaps. His approach what his three-year-old eats is similar and as a father he leads by example, “If he wants to eat fish fingers and chips, that’s fine, but I won’t be eating chips with him, so he’s the odd one out.” 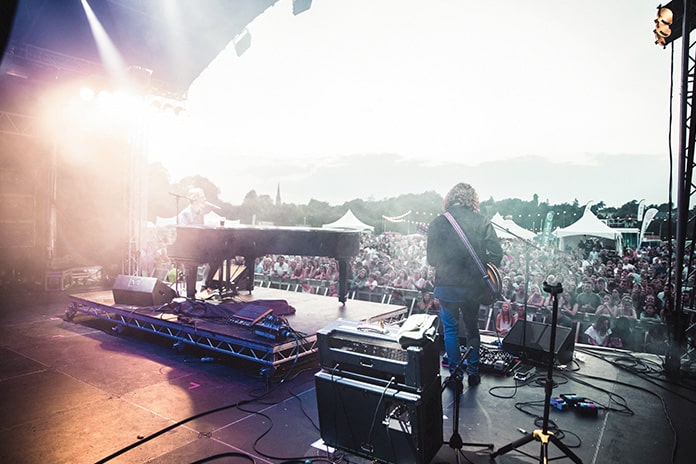 The Hand and Flowers in Marlow received its second Michelin star in 2012, the first ever pub to have done so. Kerridge’s other pub, The coach, on the same street, has one. When asked how important Michelin stars are, the chef is quick to reply, “Very.”

“Not for the reason you probably think… If you cook to get the star, you’re cooking for the wrong reason. Just as the Guide is for guests, chefs should be cooking for the guests. They’re brilliant from a professional point of view, to achieve two is amazing for staff morale, but first and foremost they recognise a world-class level of cooking and consistency.

What about the pressure on chefs to maintain their star(s), does he ever wish they didn’t exist? “Never. You choose to be a chef because you love the pressure. If you wanted an easy life, you wouldn’t do it. It takes a huge amount of commitment.

“I had a conversation last year with some fellow two-star chefs, someone said ‘can you imagine if next year the guide ceased to exist?’ The three of us couldn’t fathom it. How would you define yourself? The idea of them being taken away… It’d be like being stripped of your identity.”

Pub in the Park starts in Leeds on 31 May and finishes in St Albans on 15 September. For more tickets, dates and locations, visit pubintheparkuk.com