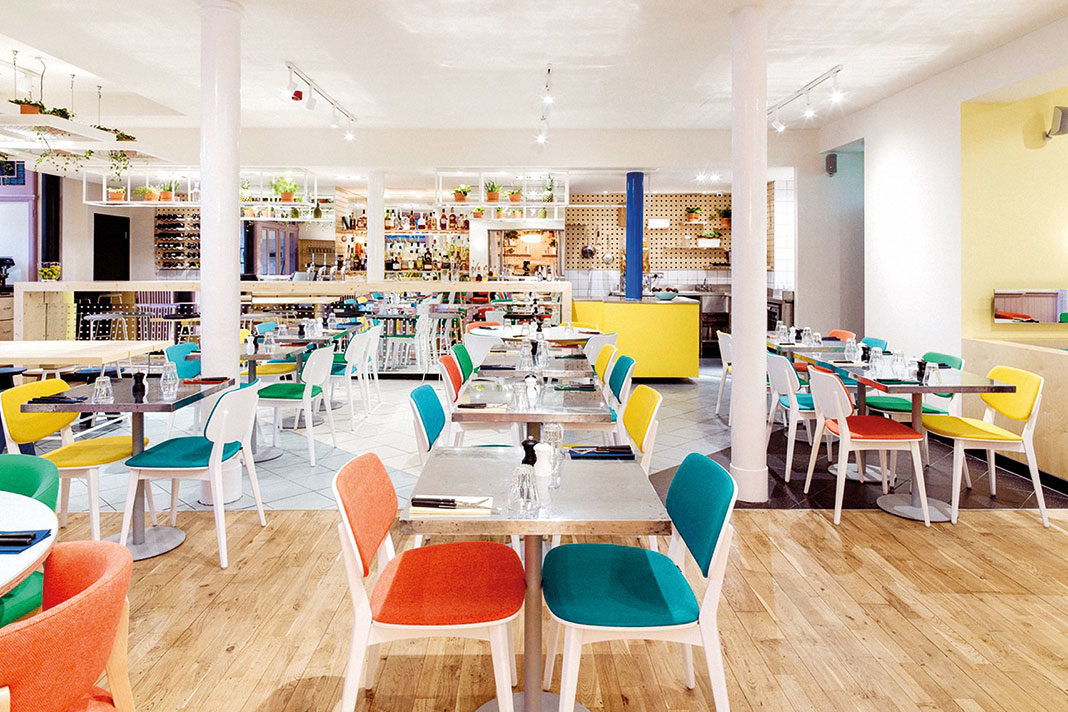 London is having a Hockney moment. If Pomona’s were an artist, it would definitely be Hockney, in his California period. Sunshine-drenched colours and a clean, fresh feel charactise Pomona’s, which feels very un-London, especially when you remember the building’s former incarnation as a traditional pub. The old mahogany bar with its tiles and Edwardian pub fittings were prime examples of their type, but there’s no trace of any of them now in this candy-coloured interior.

It feels fresh and summery, cheerful and fun (maybe a touch kindergartenish, but in a good way). We are here for a family brunch and notice immediately that the mint tabletop matches our daughter’s t-shirt perfectly, showing how youthful the palette is. Behind us we can hear the rumble of a serious smoothie maker, so we immediately order juices. Plain pineapple for the children and a delicious chia, coconut and pineapple concoction for me.

It’s a mixed menu, less aggressively healthy than we might have feared, offering a wide range of options. So we order a crab and bacon burger that comes in a toasted brioche as an entire deep fried soft shell crab with some perfectly crispy bacon and slightly spicy sauce. It’s good and the grapefruit, quinoa, fennel and pine nut salad with crumbly goats cheese was a good match.

We also went for a Ginger Pig steak with charred endive and horseradish and an irresistible salad of shredded Brussels sprouts, Spenwood and hazelnuts. Who thinks of Brussels sprouts in February, and who thinks of shredding them, and aren’t they usually really nasty cold? Success all round for this one, with its whole roast nuts and slivers of cheese.

For the children, it’s pancakes with blueberries and coconut yoghurt, and French toast with cinnamon cream. All around us, people are inexplicably videoing themselves pouring maple syrup onto waffles with great care. Maybe it’s the painterly surroundings that are inspiring them to create images, or maybe they just always do that. Next time we’ll try dinner.