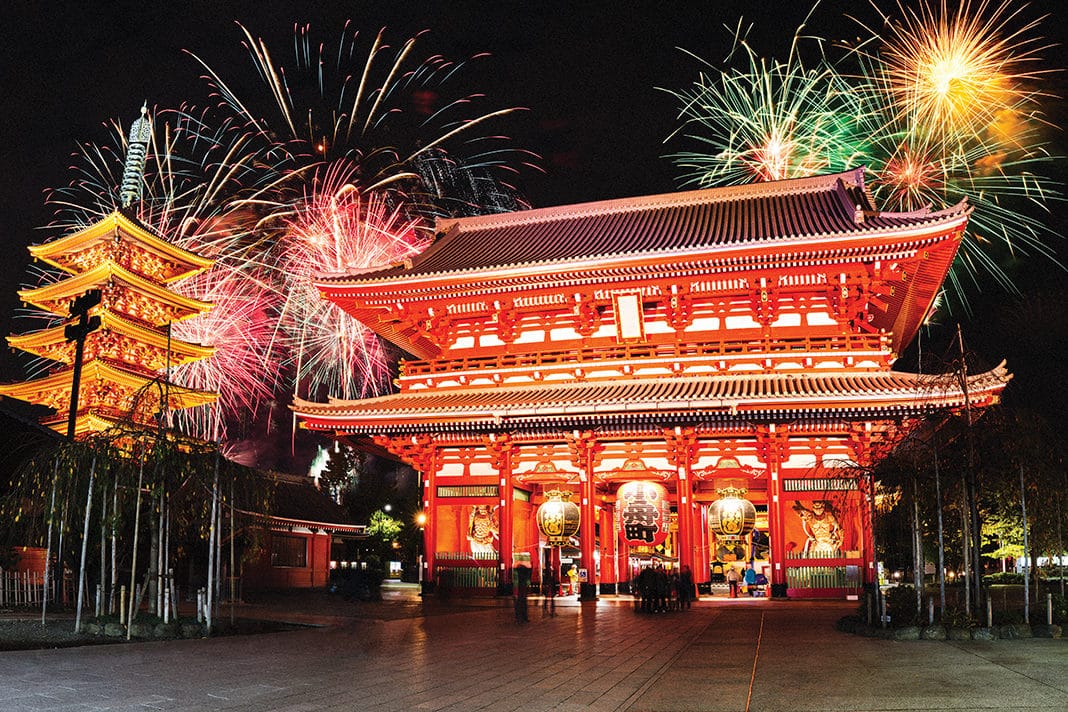 Experience New Year’s Eve in Tokyo, a thriving capital that is alive with culture

Tokyo is undoubtedly one of the world’s most fascinating cities. It’s a hub for hi-tech innovation and a poster-capital for modernity, yet it manages to retain the soul of traditional Japan. The city has a reputation for being extremely comfortable and immensely luxurious, but at the same time is deemed mysterious and exotic to even the most well-travelled bodies.

Begin your trip with a trek up Mount Fuji. As Japan’s tallest mountain, it’s an iconic symbol for the country and the nearly-perfectly shaped volcano has been worshipped as a sacred mountain for years. The experience of climbing through the early hours and the exceptional views of Fuji-san from the neighbouring Mitake-san area will make the journey to the summit completely worthwhile.

If you are a self-confessed shopaholic, Tokyo has it all. Highly recommended is the Ginza, home to the city’s luxury boutiques and treasured department stores, such as the classic Mitsukoshi and avant-garde Dover Street Market Ginza. For jewellery magpies, Japan has a fascinating heritage as the birthplace of pearl cultivation when, in 1893, Kokichi Mikimoto, founder of the famous jewellery company, successfully managed to coax a semi-spherical gem from an oyster for the first time. Japan is renowned for its Akoya Pearls, made famous by Marilyn Monroe whose iconic look featured a Mikimoto necklace.

Culture vultures will be thrilled to discover that Tokyo is full of timeless art pieces. Don’t leave without paying a visit to The Myth of Tomorrow by Tara Okamoto which is displayed in Shibuya Station. It’s a beautifully haunting 30 meter-long piece of art that depicts the horror of the atomic bomb exploding over Hiroshima.

For a true taste of Japanese heritage, get yourself a seat at a sumo wrestling match. Tokyo’s Rygoku Kokugikan stadium is the sporting centre of sumo culture within Japan and is the perfect place to witness this event. Although the structure is not the original that was built in 1909, it’s still an architecturally impressive sight and well worth a visit.

New Year’s Eve in Tokyo is like nothing you will have seen before in London. Here, celebrations are entirely family-oriented are citizens are given time off to go to their hometown, visit their families and engage in an extensive set of traditional customs and rituals.

The iconic Palace Hotel is a central hub for celebration. Each year it plans a vast array of activities, inviting guests and locals to immerse themselves in one of the country’s most symbolic and sentimental holidays over three days, known as oshogatsu. It’s the perfect opportunity to partake in local culinary customs such as toshikoshi soba, which is the eating of ‘year crossing’ soba noodles just before the clock strikes midnight. Another tradition is the ritual of osechi-ryori, a box of symbolic and traditional foods which are chosen for consumption within the first three days of the year and are presented by the Palace’s esteemed Japanese chefs.

During this time of year, the hotel also puts on an array of musical performances. Perhaps most enjoyable is the distinct sound of koto, a traditional Japanese instrument, which can be heard from the lobby of the hotel throughout the celebratory week. Also not to be missed is the shishi-mai. These lion dancers are guaranteed to liven up your holiday and are an iconic feature in Japan’s New Year’s celebrations.

The Palace’s countdown cocktail party is known to be one of the best places to ring in the New Year. Guests get dressed up to enjoy free-flowing drinks and enchanting live performances all evening. Arguably one of the most memorable moments of your trip will be to witness hatsuhinode, the first sunrise of the New Year from the Palace Hotel. The sun setting against the urban skyline and the natural landscape of Imperial Gardens is a mesmerising sight. This is one holiday snap opportunity you will not want to miss.

The next day’s celebrations are again, superb. The Palace hosts a dinner concert hosted by the Tokyo Philharmonic Orchestra, and the hotel’s ambience and interior set-up are spectacular.

While there, guests also have the opportunity to witness hatsugama, the first Japanese tea ceremony of the year, a beautiful event which takes place across the country and is traditionally celebrated between tea masters and their students. In fact, it is the only time when the master will serve their student, a reversal on the usual status. Hatsugama is also unique due to its festive mood, the especially fine cuisine that is served alongside and the display of curved braided willow branches that are hung in the alcoves of venues.

New Year’s is a fantastic time to be in Tokyo, and with its seemingly unlimited choice of celebrations, shopping, entertainment, culture and dining, there’s more than enough to get your teeth stuck into. Prepare to be truly dazzled.

Rates start from around £ 619 per room per night. Esterre is a new concept Alain Ducasse restaurant which is set to open in the hotel on 1 November.
palacehoteltokyo.com