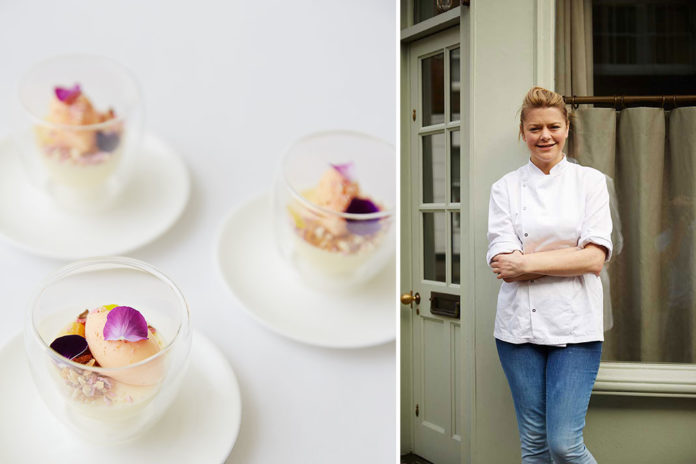 Former Masterchef contestant Marianne Lumb is at the helm of London’s smallest fine dining restaurant. Absolutely marvels at its proportions, and at her culinary finesse


London’s smallest fine dining restaurant seats just 14 people in an interior that’s so intimate you could almost eat from each other’s plates. Not that you would, of course, not least because behaviour is paramount in such a small space. But it’s easy to be tempted when everyone’s food as spectacular as this. Marianne, named after its chef and founder Marianne Lumb, is an ambitiously foodie destination in Notting Hill’s Chepstow Road that commands bookings three months in advance and specialises in a decadent five-course tasting menu.

Lumb achieved her 15 minutes (‘I mean literally’) of fame after appearing in Masterchef in 2006, despite not actually winning it.‘It was a very weird time,’ she tells me, in the comfort of her own restaurant. She had been working as a private chef and while working on a book about knife skills, her agent suggested Masterchef. ‘I was worried that nobody was going to buy the book and I’d always wanted to do some TV. And then my book was published the month it aired so I went from being a total unknown to having my 15 minutes.’ Being on Masterchef, she says, was intense and difficult. ‘It was crazy. I’m not sure I could do it again. We had to cook for London’s trickiest food critics, preparing three courses from scratch in 45 minutes on domestic equipment in really hot conditions with no natural light. It sucked everything out of me.’

By this point, Lumb had been cooking for about 10 years and after the show, she went to ‘hide’ in the countryside, working as a private chef for Lady Bamford and soon after that she began dreaming up her own restaurant, which is where we are having this conversation, lunch looming. You can tell why she makes good television – she’s charming, blonde, glamorous, tall and well-spoken, with a clear confidence and lots of energy. Was it part of the dream for it to be so tiny? ‘The dream was to build a world-class restaurant serving beautiful food and wine. Basically to do what I had been doing, but on a commercial scale.

I thought my cooking deserved a platform for everyone to come and try it,’ she says. Though really she was envisaging more of a normal-sized place. With six staff manning Marianne at a time, the staff-per-square-foot ratio is particularly high and it’s amazing that she makes it work so well. Being so small makes the place feel extra special, as do the super stylish shades of sage and mushroom it is painted in, the lovely lighting and the curtained windows, all of which create a cosy yet glamorous den for our daytime feast. We are embarking on an epic five-course tasting menu, though reluctantly declining the accompanying deluxe wine recommendation. I can already smell the truffle. ‘Oh that’s just the popcorn,’ says Marianne, pointing at a thimbleful of heavily infused popcorn on the table. ‘We use a lot of truffles and when we have trimmings we use them for salt so as not to waste.’

One of the signature dishes, she says, is truffle linguini, a nod to the building’s past (it used to house much-loved Italian eaterie Casa Fratini). Our lunch certainly is a feast, kicking off with an impressive amuse bouche, a tiny cupful of intense chilled tomato consommé that’s like drinking the purified essence of a hyper real tomato. Then there’s the starter: a perfectly formed plate of roast asparagus with artichokes and noir de Bigorre cured ham, followed by dreamily fresh scallop ceviche (‘they arrived this morning almost talking to us,’ says Marianne, ‘so it would have been a shame to cook them’) – thinly sliced with notes of chilli and citrus. Then comes a ravioli of roe deer with miso, aubergines and Thai basil, an Asian take on pasta, before main courses, a choice of two, so we do one each, lamb and sea bass, both of them full of intriguing detail and careful thought. With small, delicate portions such as these, there’s no excess, no padding: every component justifies its space on the plate.

There’s a miniature pre-dessert of a divine lemon cream and raspberry sorbet, adorned with a tiny decorative elderflower, setting the scene for the insanely delicious actual dessert which is the improbable-sounding but winning carrot cake soufflé  with ice cream, spiced pecans and a small jug of butterscotch sauce. We are instructed to make a hole in the middle of the soufflé and pout the butterscotch in, which seems a shame since it’s such a perfect structure. ‘Souffle is one of our specialities,’ says Marianne. ‘It’s so nice that it has no distance to travel from oven to table,’ which is an advantage of the restaurant’s diminutive size. In fact, there are few shortcomings about its size. ‘We can’t make bread here,’ she concedes. ‘It’s too small for that.’ But otherwise, Marianne’s is perfectly formed. Just make sure to book ahead.