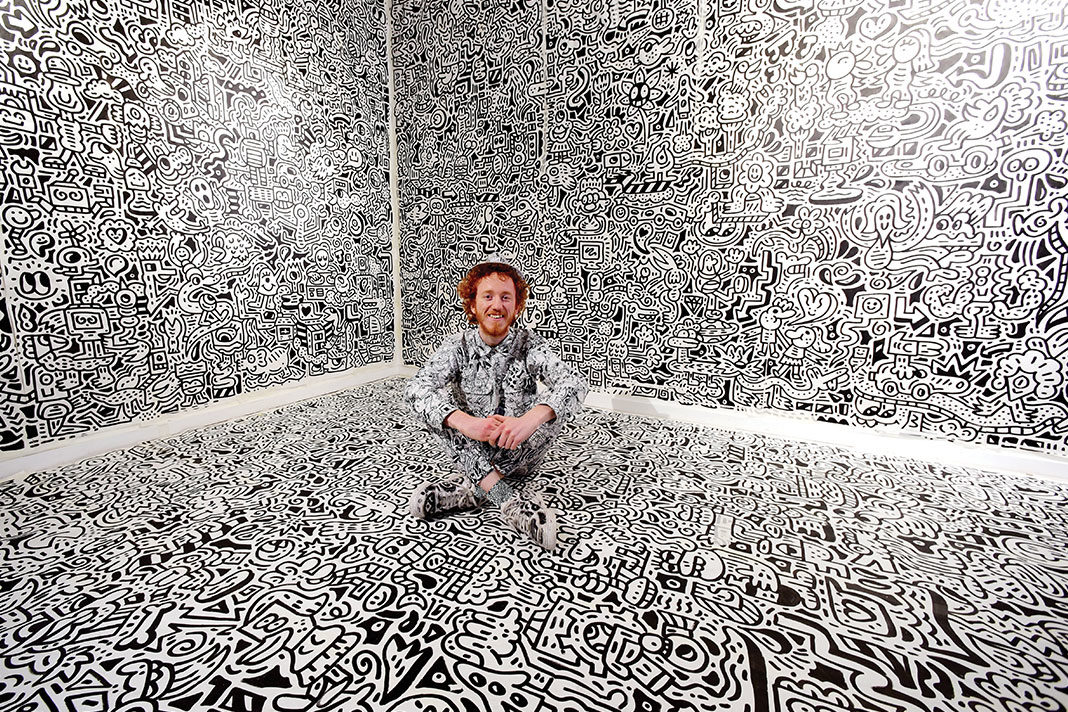 Mr Doodle takes South Kensington by storm with his manic illustrated universe. Trust us, you won’t want to miss this exhibit

Some people are prolific, even compulsive, doodlers by nature. Give them a pen and a piece of paper, a receipt, a napkin – even a crisp packet with the right sort of pen – and they will quickly and efficiently cover it with swirls, flourishes and randomly connecting marks.

A largely uncelebrated medium, doodling is widely frowned upon in many of the places it happens in most: at schools, in business meetings, during emotionally charged conversations. Some doodlers, of course, have greater appeal than others, and some have such wide appeal that their doodle output is in fact art.

One such extreme doodler is Sam Cox – aka Mr Doodle – who has harnessed his unstoppable habit to create a world of doodles. He says his work is ‘like a growing drawing virus’ and his inspiration comes from, among other things, old cartoons, cereal boxes and video games. As a child he would fill sketchbooks with doodles and as an adult he has covered everything from chairs to campervans in his unique style of manic illustration.

His work can be seen in murals and installations around London, as well as in private collections – and now he has taken over a corridor at The Exhibitionist Hotel, filled it floor-to-ceiling with pen markings. Cox says, ‘I feel a lot of art is lacking a sense of humour and that people are quite serious about it but, it’s a fun thing to be able to draw and create your own world.’

Cox has covered walls, floors and ceilings in the hotel with his trademark marker pen, as well as his own shirt, trousers, hat and tie, in a style that’s comic and eccentric, as well as entirely individual.

Don’t miss immersing yourself in his world.

Doodlemania is at The Exhibitionist Hotel, 8-10 Queensberry Place SW7 until 28 July