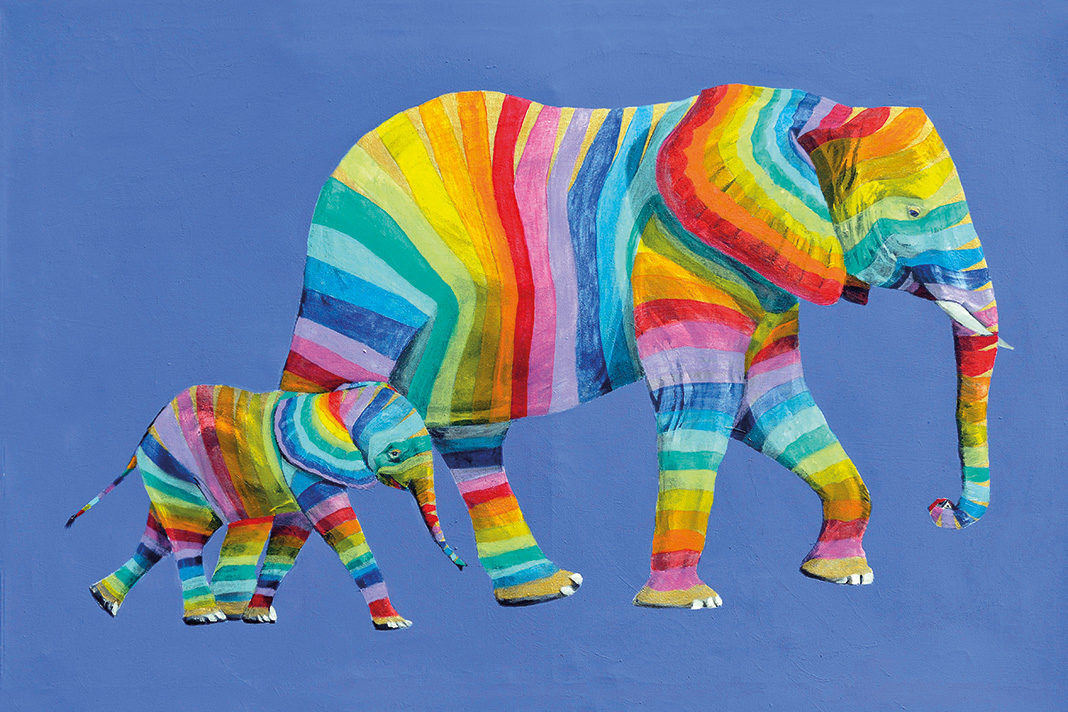 Tell us about the new technicolour animal series you will be exhibiting at Bentalls, where did the inspiration for it come from?

I’ve always been interested in nature, evolution and beautiful creatures. I used to paint tropical birds because I love their oddness; mostly parrots, penguins and toucans. Two years ago, a client saw my bird paintings at 1of1 and asked me to undertake several commissions of her pets. Out of the blue she asked for a technicolour hippopotamus. It was a great commission which I did on vintage blueprint paper. The client was happy for me to print a limited edition of the work which proved unexpectedly popular. Since then I have been experimenting with stripes, patterns and different animals. I paint them as real creatures first and then add the surface design, which I think helps to give them a 3D effect.

What do you hope viewers will take away from your work?

I genuinely hope that my work makes people happy and that when they buy it, they have a piece on their wall that makes them smile whenever they see it. For each piece I try to make an image that is immediately identifiable, fun and memorable, but also elegant. I paint the type of artwork that I would like on my own walls and despite the colourful overlay, I do not want my work to appear cartoonish.

How significant has local support been to your career so far?

Local support has been the backbone of my artistic career. I first started selling my artwork six years ago in Kingston and Teddington and since then my work has grown in popularity in south west London. If not for the positive reception my work received where I live, I do not think I would have had the confidence in my own work to take my art to different fairs across Britain. Over the last two years my work has been shown in art fairs throughout the UK and as a result my paintings are now in collections in the US, China, Africa and Europe, which is really gratifying.

Tell us about your history with Bentalls, how did you come to work with them?

Bentalls have long supported local artists and designers in many ways, such as collaborating with local colleges and universities like Kingston College where I studied. I came to exhibit at Bentalls through 1of1, a gallery in Teddington where I show my work. 1of1 had worked with Bentalls running creative workshops for customers before the first show I participated in. The first show ‘Meet the Makers’ coincided with renovations in store which gave us a wall of hoardings to use as a pop up exhibition space. The Bentalls team are fantastically supportive and were pleased with how the first show was received. Since then I have participated in two more group shows and also did a solo show for Bentalls 150th anniversary last summer.

You use a mix of media within your work, what’s one of the most surprising you’ve used?

I came across a lot of vintage French blueprints from a tannery several years ago and I like to plaster them onto canvases to use as distinct backgrounds. A lot of them have fantastically intricate diagrams on them. The blue and white often looks good with vibrant coloured animals painted directly on top. I usually like to make a messy crackled background beforehand and then complete the majority of my paintings with acrylic paint. To do this, I use a lot of water when making my backgrounds. Often I will add layers of paint and then intermittently cupfuls of water or highly diluted paint to dry slowly, sometimes over days. This helps drag the paint around to dry in different chaotic and distressed patterns.

What’s your favourite media to work with?

Acrylic is a great durable medium. I tend to paint my psychedelic animals in their entirety with normal colouration and then wash over the painting with diluted but still reasonably thick bright acrylic paint. I am a big fan of metallic paint and like to incorporate gold into my animal paintings. Golden horns, hooves and stripes along the spine add another dimension to my paintings.

Who are some of the artists who have inspired your career so far?

Henri Rousseau is certainly an influence on me. His jungle paintings are very evocative; his dreamlike depictions of nature struck a chord with me the first time I saw them. Another artist who has inspired my work is Ken Oliver, a member of The London Group. I grew up with some of his work in my parents house and it is very remarkable. He paints incredibly textured, monolithic paintings, many of which contain natural imagery, either animals, seeds or flowers as a central focus. They are heavy pieces where texture is thick and his use of colour is subtle and distressed. I think his way of experimenting with physical media influenced my own approach to painting.

What’s the most satisfying thing about your job?

My work is bright and colourful and quite light in tone so I think that reflects the type of people who are drawn to it.  My customers are usually upbeat and friendly and a joy to talk to. It’s nice being asked to undertake commissions and getting complimentary feedback from clients always feels great. People get very passionate about their animals and it is a big commitment for people to spend several hundred pounds on a painting, so it’s gratifying to know they chose my work.

What are some of the highlights of the exhibition? Are there any pieces of work that you are particularly excited for visitors to see?

I have recently completed a painting of my neighbour’s labrador which I am keen to show at Bentalls. I have been wrapped up in painting African animals for a long time and I am looking forward to seeing people’s reactions to my take on more everyday or domestic animals. I have a new and very textured painting of a pair of fox cubs that I have not added stripes to which I am also keen to see how people respond to.