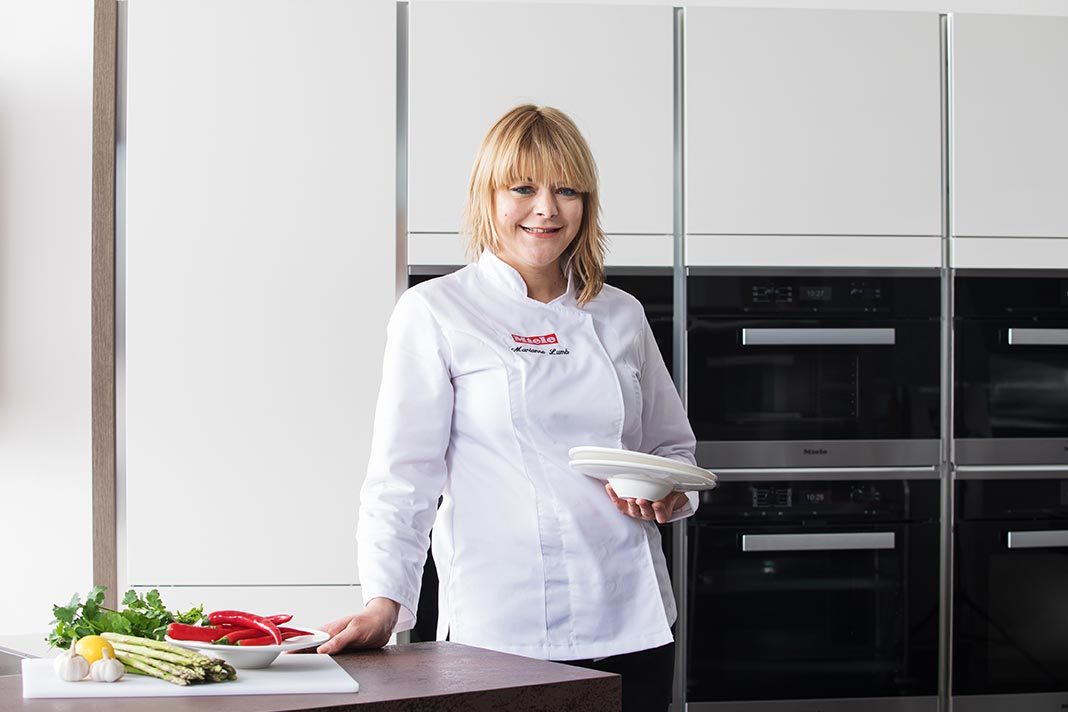 You might recognise Marianne Lumb as a finalist on BBC’s MasterChef the Professionals, but it’s her innovative, forward-thinking cooking style that have people clamouring for a place in her namesake Notting Hill restaurant. The 14 cover restaurant, Marianne was awarded a score of 7, in the 2017 Good Food Guide, reaching no. 45 in the top 100 restaurants.  This year, Marianne Lumb has collaborated with Miele for the launch of The Perfection Series which champions its unique steam technology. Here she shares some of her favourite recipes from the partnership so you can recreate a piece of her magic at home.

Did you always want to be a chef growing up?

I just took every opportunity to be in the kitchen at home. I loved cooking at school, but I was encouraged by my parents to study for an academic degree.

Who taught you to cook?

Myself, really, but my family and various chefs I have worked with and been under have been very important. Also, the people I have cooked for privately have taught me a lot about cooking and what people like to eat.

Tell us about Marianne; what was the thought process behind opening a restaurant that is so intimate in size?

The small size wasn’t always the plan, but it was the only available site that felt right. I walked in and just thought… this is it.

How did you go about selecting your team? What are the challenges and benefits to having such a small team?

I learnt the hard way when selecting the team. I feel now that loyalty and being a good egg (no pun intended) is often better than skill set. Skills can be honed, after all. And there is nowhere to hide in the 10m sq. kitchen. The challenges are that everyone has to get on very well. The benefits are that you are a pretty tight-knit family.

What’s your favourite dish on the menu?

Currently, we have an aubergine dish that I have been thinking about since cooking in the Languedoc 12 years ago. Fig leaf marinated tiger aubergines, with black figs, barrel-aged feta and coriander.

Where does your inspiration come from when drawing up new menus?

It comes from what’s in season first and foremost; we look at the markets in Milan, La Boqueria in Barcelona and Rungis, France. And, of course, local British markets.

What three kitchen gadgets can’t you live without?

What do you like to cook on your day off?

I don’t… I think it’s really important to have a day off cooking.

I have been craving to travel more in Asia. But I’ve just had what I would call a life changing trip to Switzerland – watch this space.

Are there any other chefs that have shaped your career or have inspired you in any way?

I’ve always been inspired by Skye Gyngell – a chef like me, who specialised for a while in being a private chef. Also, Alain Passard and Eric Chavot.

We are so lucky with a city full of world class restaurants. I love The Ledbury, Bibendum & Fera, but there are so many I haven’t been to yet.

What’s your favourite dish from childhood?

Cheese fondue with my Swiss family.

What’s been your top career highlight so far?

I was super excited to be cooking alongside Claude Bosi, Chris Denney and Lee Westcott for a S.Pellegrino dinner recently. Also, collaborating with Skye Gyngell for a Miele campaign was really fun – we cooked dishes together using a Miele steam oven for every dish. However, I suppose opening my own eponymous restaurant is pretty cool. 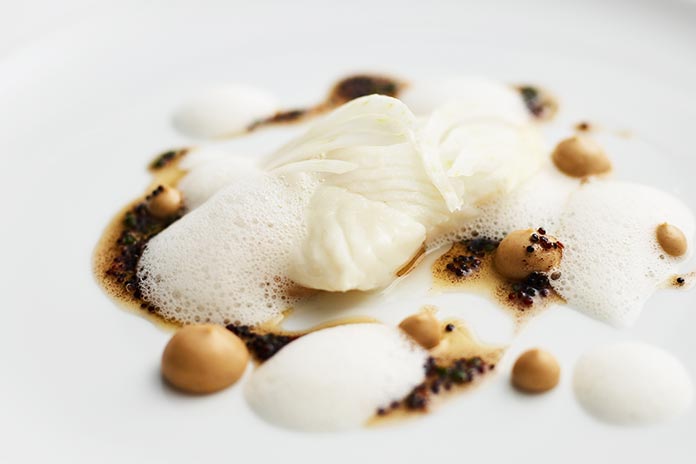 For the butter sauce
Infuse the double cream with a third of the seaweed overnight in the fridge. The following morning strain the cream getting rid of the seaweed. Beat the cream with an electric whisk until it splits, discard the liquid and press firmly the solids with a cloth. Keep refrigerated until needed (you will need in total 250g of butter).
3 tbsp white wine vinegar
1 glass of dry white wine
12 black peppercorns
A couple of sprigs of fresh thyme
1 shallot, peeled and minced

STEP 1: Soak the quinoa in enough cold water to cover for 15 minutes, then transfer to a solid steam container and cook on 100°C for 20 minutes. When finished, allow to dry on a tray lined with a j-cloth.

STEP 2: Meanwhile, make the white celeriac puree by placing all the ingredients into a large vacuum bag, vacuum flat and then steam for 45 minutes at on 85°C until just soft. Then blitz everything until a very smooth puree.

STEP 3: Make the dark celeriac puree by heating a heavy based pan until very hot, then add the sliced celeriac with the olive oil and stir fry very quickly so that the celeriac colours to golden brown which will take at least 10 minutes. Then, add the butter and ensure it colours to a nut brown. Turn the heat down and carry on cooking slowly, until all of the moisture has gone, and the celeriac flavour has concentrated and it is soft to the bite. Transfer to a food processor and blitz to a very fine puree, season and set aside.

STEP 4: Make the beurre noisette, heat a small metal pan until very hot and throw in the cold, diced butter. Allow to melt whisking all the time until the butter turns a nut brown, pour into a small pan, don’t leave behind all of the beautiful dark solids. Set aside.

STEP 5: Place each turbot portion in a small vac pack bag. Take half of the white celeriac puree and let down with a little milk to a double cream consistency. Pour over the turbot and vacuum pack tightly.

STEP 6: Place the other half of the celeriac puree into a pan, let down with a little milk and water, and add a teaspoon of soy lecithin. Blitz using a blender and season.

STEP 7: Quarter the fennel lengthways and slice very thinly on a mandolene, to make ‘wings’ and transfer to some iced water.

STEP 8: When ready to serve, heat the beurre noisette and add some lemon juice, chives and the patted dry quinoa. Steam the turbot at 75°C for 3 minutes. Arrange some dark celeriac puree onto each plate. Top with the turbot, spoon over some beurre noisette. Blitz the warmed white celeriac foam with a blender and spoon over the fish. Finish with the fennel ‘wings’ and serve immediately.

Food Tip: The beurre noissette is a very useful sauce to master but don’t use a non-stick pan to make it. Use a small metal pan, with a sauce whisk, whisking all the time to ensure an even, nut-brown colour. Don’t leave behind the dark solids – this is the best flavour.

To find out more, derkern.miele.co.uk