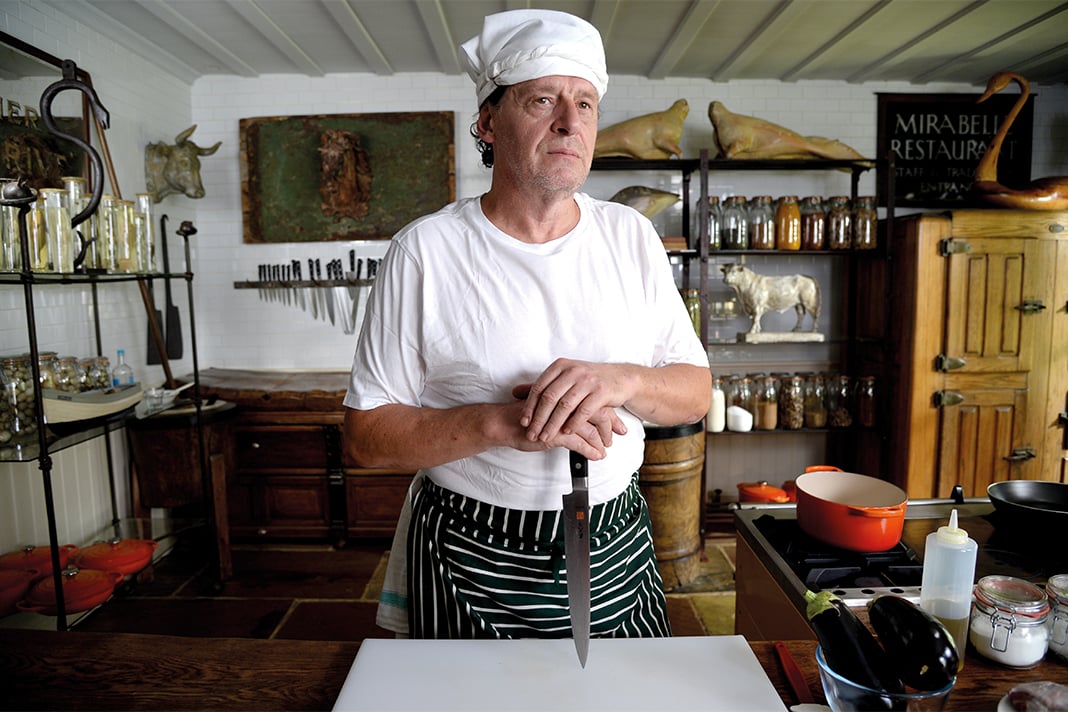 This isn’t standard kitchen speak. The gravelly voice in its half whisper saying: “I’m not here to impress you. I’m here to inspire you. Let’s ignite the imagination. Let’s take you somewhere you’ve never been before”. Marco Pierre White, enfant terrible of the British cooking renaissance, is the guru behind BBC Maestro’s course Delicious Food, Cooked Simply.

The online learning platform also features David Walliams instructing us in writing for children, Gary Barlow on songwriting and Jed Mercurio in television drama. With learning at home very much flavour of the moment, improving our cooking skills is a popular and worthwhile ambition, and Maestro’s motto is “let the greatest be your teacher”.

Marco Pierre White has been uncharacteristically quiet in recent years. Widely seen as the first celebrity chef, in 1994 he was both the youngest and the first British chef ever to be awarded three Michelin stars. He trained with Albert and Michel Roux at Le Gavroche and Pierre Koffman at La Tante Claire, and went on to mentor Gordon Ramsay and a generation of budding chefs before retiring in 1999 to become a restaurateur rather than a chef. Pierre White was the original shouty chef, unafraid to bar people from his restaurants for crimes against taste (such as asking for salt) and famously making Gordon Ramsay cry. 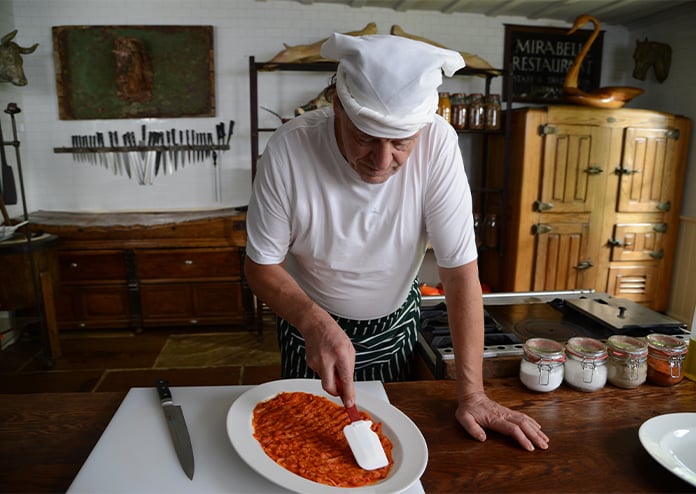 But there’s no chance of him making anybody cry during the short videos that make up this course. Gone is the hellraiser of the tabloids and in his place is a low-voiced, grey-haired figure, more Dumbledore than rockstar, a wise sage of the kitchen. We are here to learn to perfect everyday dishes, not to cook cheffy fantasies. A lot of it is about attitude, and philosophy – and more of it is about Marco himself. It’s not even until lesson six that we actually encounter a recipe, and then we’re eased in with anchovies on toast. Beacuse first we’re introduced to the rules according to Marco. “Food enriches people’s lives,” he announces. “Feed people well. They don’t come to be impressed – they come to be fed. And eat while it’s hot – don’t wait for anyone. The only person you wait for is the queen.” 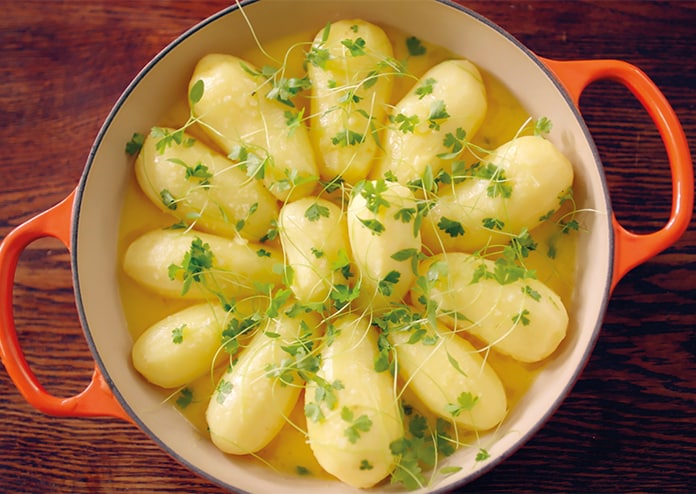 He’s certainly entertaining, and his conversation is full of gems that he could release as slogans on teatowels. “Cooks accept that mother nature is the true artist,” he says. And “gastronomy is the greatest form of therapy that any misfit can be exposed to.” And my favourite: ‘”A tree without roots is a piece of wood. Think about it.” He talks about Anthony Bourdain as “the most beautiful pied piper”. “We live in a world of refinement not invention. Think about it.”

So what do we learn? Lots, actually. Starting with scrambled eggs, to which the key is very low heat. Perfect scrambled eggs are cooked in a pan that’s cool enough to touch, slowly. Butter makes everything taste better, is a general rule. “Don’t whisk. It’s not a race. It’s about the eggs and only the eggs. Don’t rush it. Only a fool would rush scrambled eggs.” Then there’s ragu. “Don’t make bolognese to serve today. Make it to serve in three or four days’ time. It will be sensational”. The first key is to grate, not chop, the vegetables. And then once they’re in the Le Creuset (always a Le Creuset), do not move the pan. ‘Work your beef,’ he says. Then there’s macaroni cheese: “It’s about taking people on a journey of discovery.” How to avoid lumps in your white sauce? Simple: more butter than flour. A bay leaf, a clove. And then, interestingly, instead of pouring sauce over cooked macaroni, we add the macaroni to the bechamel before adding the cheese in layers. ‘Keep the two flavours apart so you can taste the textures.’ And then cook it under the grill, not the oven.

On signing up for the course you’ll receive a full 89 pages of course notes, but many of Marco’s words of wisdom are bound to imprint on your brain. This journey is three and a half hours long and costs £80, less than a meal in any of his restaurants. Think about it. 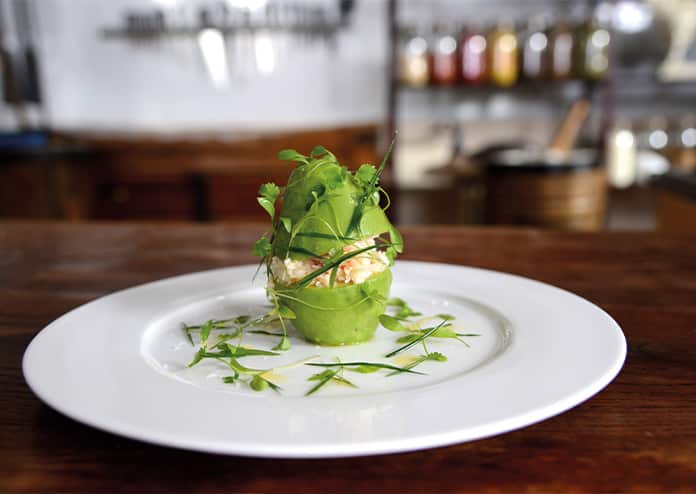 “I use one knife for almost every recipe, and that is all you will need. I recommend investing in a good quality chef’s knife and a small ‘office’ knife for the more fiddly jobs. Keep them clean and keep them sharp and they will be the only knives you will ever need.”

“A good solid wooden chopping board, or easy to clean plastic board are what I recommend. Make sure to buy a good-size one with plenty of surface on which to work.”

“Invest well, and look after a frying pan. I suggest a non-stick frying pan with a metal or silicone handle, which means it can be put in the oven. It is important to give yourself that flexibility. Once bought, be sure to maintain your pans properly – try never to scratch the surface with metal utensils and avoid putting through the dishwasher.”

“I use a flame-proof, cast iron casserole for so much of my home cooking. Between that and the frying pan you almost don’t need any other equipment. They are not cheap, but they are hardy, and they’ll allow you to take your cooking from hob to oven. From a cooking perspective they are important too, as it means you can cook an entire ragù or sauce in one pot, carrying all the flavour through from beginning to end.” Marco’s casserole is a classic orange Le Creuset.

“I use a spatula almost as much as I use my knife. It is the wooden spoon’s natural successor. They are shaped perfectly for even stirring.”

Like this? Check out the best restaurant recipe boxes to order

Protected: WIN: The Ultimate Night Out at Circus Bar and Restaurant in Covent Garden

Efe - 17th May 2021
0
We’re offering you the chance to win Circus’ outstanding four-course tasting menu, complemented with prosecco and a signature Circus cocktail each for four people...

Layla Turner - 7th May 2021
0
The fashion, beauty and lifestyle items on our wish list this month By Abbie Schofield Just like that, it's May. The past month has been spent...
© 2018 Zest Media Publications Limited