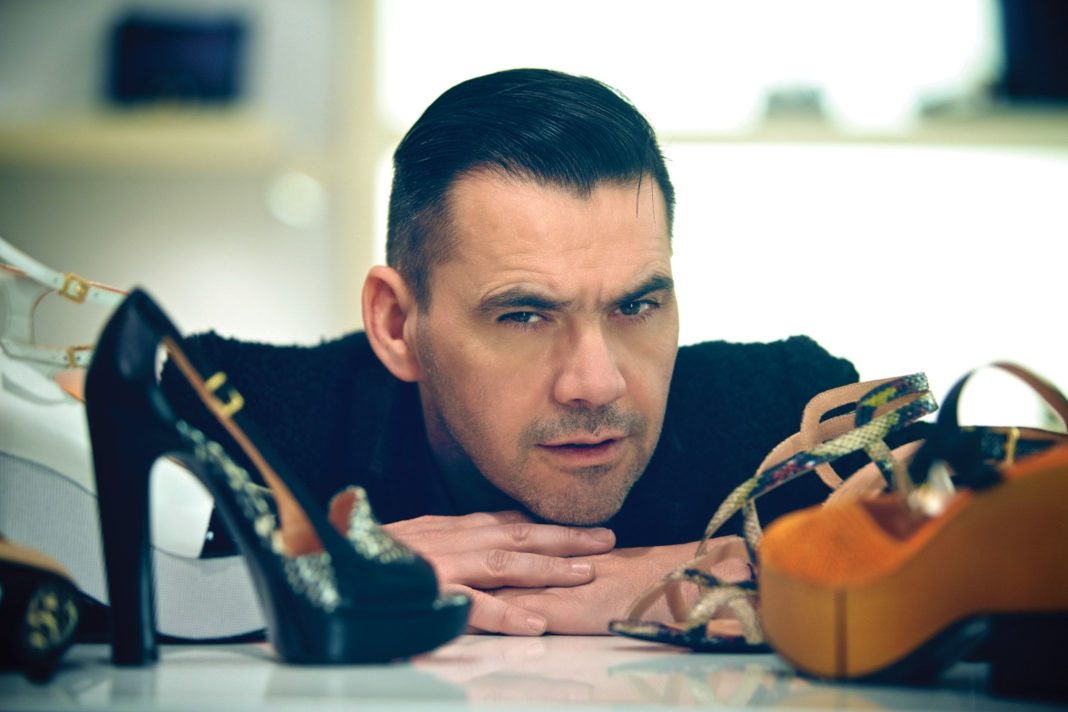 Since taking the reigns of Robert Clergerie in 2011, designer Roland Mouret has brought the French heritage label into a new era, one step at a time.

I’m not a shoe designer, I’m a fashion designer,” decrees Roland Mouret, the lauded creative director of heritage label Robert Clergerie. “But I understand the bigger vision of the brand and that the shoes are meant to be worn with clothes,” he elaborates. Since 2011 Mouret has been at the helm of the luxury brand, turning his hand from apparel to accessories.

The 54-year-old Lourdes native first secured his place in the industry designing womenswear under his own name. But when opportunity struck to head Robert Clergerie’s eponymous brand, accepting the new role was a no-brainer: “When you have a company and a designer who has created more than a product [but] a lifestyle of a generation, it’s quite fantastic to work with that kind of legacy.” Mouret clarifies, “I don’t try to be presented like Robert never exists, I try to be presented like the son, the son who follows his Dad but at the same time [as someone who] really believes what I know.”

The sale of Robert Clergerie to Hong Kong investors Fung Group could have been fatal for the brand. Yet Mouret’s innovative design eye has renewed Clergerie’s equally savoir faire spirit: “I think because there is something in common about the love of legacy in the product I have and that Robert has taught me, that love to learn, to pass on knowledge and to see the future, [means we] have the same customer who enjoys something that has a meaning in their life.

It’s quite fantastic to work with that kind of legacy

“The Robert Clergerie woman? She is someone who loves shoes like her best friends, and that’s why she likes to have a pair of shoes that she can rely on from day to evening, I think that’s what all women have in common when they come to Clergerie.” This manifests in an aesthetic possessing “a sense of duality: male/female; masculine/feminine; architectural/comfort,” Mouret elucidates, noting the classic Clergerie brogue: “It was the shoe that everybody took inspiration from.”

His recent AW15 collection, Mouret says, was “really based on the Seventies, but the Seventies between the countryside and the city. I’m quite inspired by England and the way you can go from nature to urban and vice versa.” A seemingly abstract concept to capture in shoes, Mouret explains: “It’s really funny, leather and fabric are quite similar. You never know your favourite until you start to build a shoe and see the reality of the leather and the feel: some embody the shape, they give power…it comes alive. We have a lot of patent leather too because it was really part of [Robert’s] culture. But we are really open all the time to newness.”

Mouret’s latest initiative for Robert Clergerie is his #ClergerieGirls campaign, which “started from my love of the TV series, Sex and the City. I thought it would be so great on Instagram: girls reacting in different parts of the country, showing themselves as part of a brand but at the same time defining their own identity and competing through social media.” The winner is soon to be announced and will be selected by fans with input from Mouret and Leandra Medine, founder of lifestyle website Man Repeller. At stake is a trip to March’s Paris Fashion Week amongst several other exclusive prizes.

After being given direct access to emerging talent and not to mention, receiving the largest portion of entries from the US, Mouret has developed a keen sense of ‘British style.’ He reflects: “You can always find the Brit attitude [from] the way they stand, the way they like to present themselves.” On the application assessmemt, Mouret muses, “It was really weird because some of them put a lot of pictures, they didn’t know what they wanted to do, and others were really focused and you could understand why they were completely in sync with themselves and it was brilliant.

This year has also witnessed one of Robert Clergerie’s biggest endeavours: the unveiling of its new retail identity. In celebration of the 120th anniversary of Clergerie’s manufacturer in Romans, the opening of its Walton Street location marks a significant milestone in the label’s history. Mouret describes Vudafieri Saverino Partners’ design as “a symbolic version of what we want the brand to become, which is a brand with a strong personal identity of Robert, but at the same time giving you what luxury and service is expected… [Robert Clergerie stores] were the trendy place of the Eighties. To revisit that and reposition it…the atmosphere is supposed to be more personal, more close to home from all of the elements – the walls, the floors – but everything has to have that luxury feel.”

The Mayfair boutique is the second Robert Clergerie outpost in London, the first being on Marylebone’s Wigmore Street. Irrespective of location, each space reflects the neighbourhood it inhabits while paying homage to its Parisian roots. With 2016 upon us, Mouret’s goals for the label are expectedly lofty, but equally achievable, with the designer’s To Do list including: “Focus on what the brand stands for; moving on with the store and establishing it; and just be relevant. I think to be relevant in the future is the biggest challenge.” While he makes a valid point, judging by Mouret’s past success, it seems he’ll do just fine

Beauty Heros: 10 of the Best Cleansers for All Skin Types

Beauty Heros: 10 of the Best Cleansers for All Skin Types

Hannah Hopkins - 5th March 2021
0
Oily, dry or combination skin? Our edit of the 8 best cleansers are proven to leave the skin feeling and looking revitalised and refreshed.