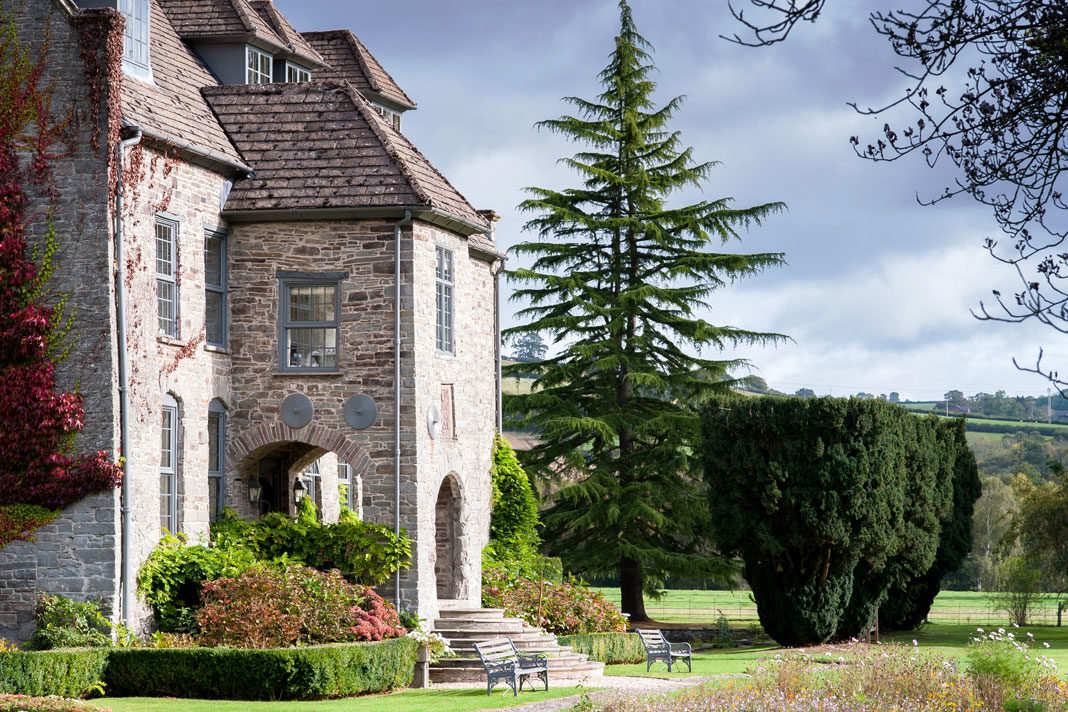 Nestled on a manicured estate overlooking the Black Mountains, Llangoed Hall is among the finest places to stay in Wales. Exquisite dining, a considerable art collection, and the Brecon Beacons on the doorstep will keep foodies, art buffs, and walkers in a state of bliss.

Llangoed Hall is a wonderful hybrid of country house hotel, grand private residence, and art museum. The site has hundreds of years of history, but was most significantly redesigned in 1912 by Clough Williams-Ellis. Today the hotel recreates the charm and magic of the Edwardian era, and boasts numerous accolades for the panache with which it has done this.

The house once belonged to Sir Bernard Ashley, widower of famed design maven Laura. Much of his noteworthy collection of 20th century painting and arts and crafts furniture remains in the hotel. Big names on display include James McNeil Whistler, Augustus John, Herman Dudley, Henry Scott Tuke, Walter Sickert, and George Spencer Watson. With such a large number of works presiding at Llangoed, management saw fit to conduct a little research. Their findings have been gathered in a large leather-bound tome cataloguing in detail each painting’s history. It makes for wonderful fire-side reading. 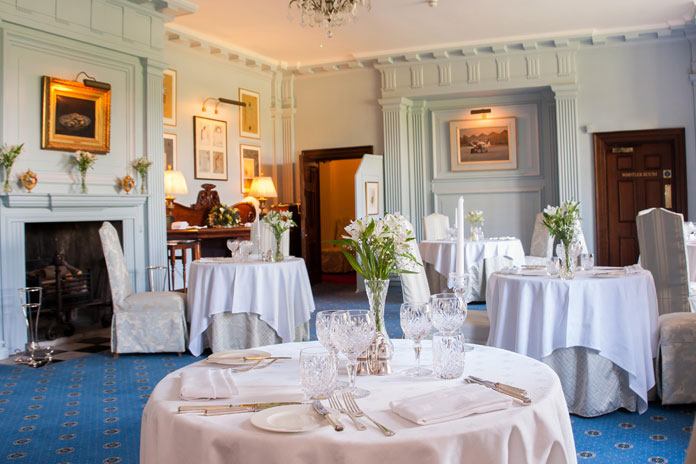 Let us not forget though that this is a hotel first and foremost, not a museum. Llangoed boasts a fantastic location, gorgeous rooms, friendly staff, and superb dining. Their restaurant was named in the top 100 in the UK by the Sunday Times, the top 50 by the Good Food Guide, and holds three AA rosettes for culinary excellence.

Bedrooms are prettily decorated with tasteful floral patterns and original antiques. The beds, many of which are four poster or canopy, were noticeably comfortable with down bedding. Bathrooms are brand new and squeaky clean, complete with Penhaligon’s toiletries and Halcyon Days chinaware. The rooms were designed with relaxation in mind. All come with decanters of sweet sherry and somewhere to sit. We cosied up on the sofa with a few glasses and the fruit basket. 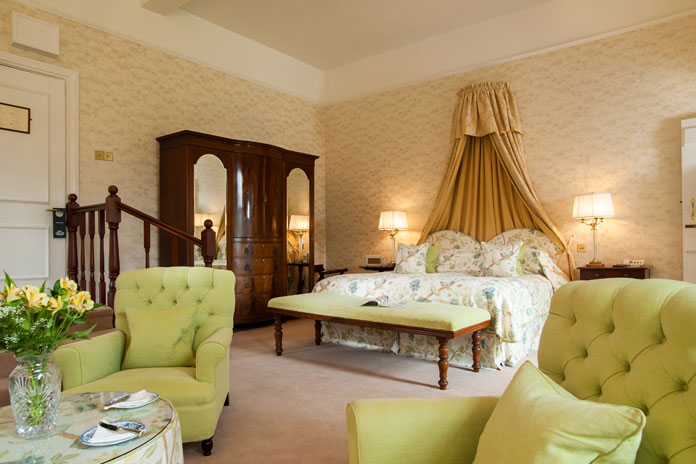 Before bed guests can make the most of Llangoed’s positioning in an International Dark Sky Reserve zone, and try a little stargazing with the house telescope. Romance seeking couples, rejoice.

Nick Brodie’s celebrated cooking has attracted widespread acclaim for Llangoed Hall. There is an emphasis – as is now the case in many restaurants – on local ingredients and sustainability. Brodie pushes things further by foraging for ingredients and growing as much as possible in the hotel’s kitchen garden. Serviced by white gloved waiters, the restaurant is old fashioned but elegant. Spot lit paintings, well-spaced tables, and a working fireplace add a sense of occasion. 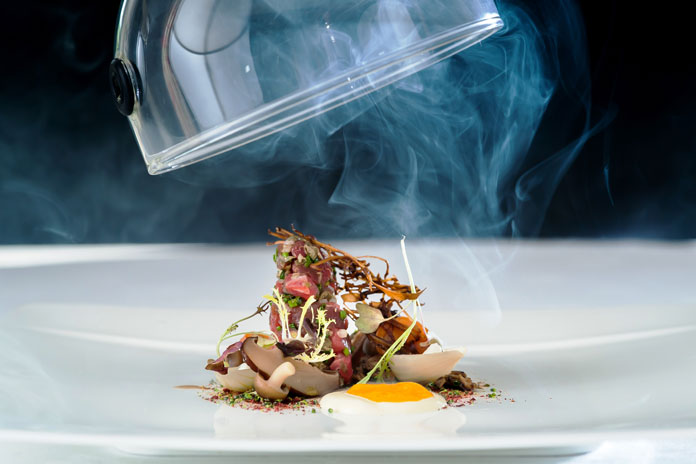 Menus are a la carte or tasting, and reasonably priced considering the aplomb with which they are presented. We ate a richly flavoured amuse bouche of truffled scrambled eggs, followed by yeasted pollock, scallop and caviar ceviche, and an exceptional dish of venison fillet with lichen and mushrooms. To finish was a chocolate sphere with praline ice cream and candied chestnuts. The meal was one of the most delicious I have eaten in months.

Over the years public figures such as Salman Rushdie, Jane Fonda, Lauren Bacall, and Prince Charles have stayed in the hotel. They come for the internationally acclaimed Hay-on-Wye Literary Festival, with Llangoed Hall being the most luxurious accommodation nearby. The small town of Hay-on-Wye is known as the bookshop capital of Britain, with plenty of opportunities to snag a second hand classic. There are also several antiques shops to potter in, and country pubs perfect for a post-hike roast lunch. 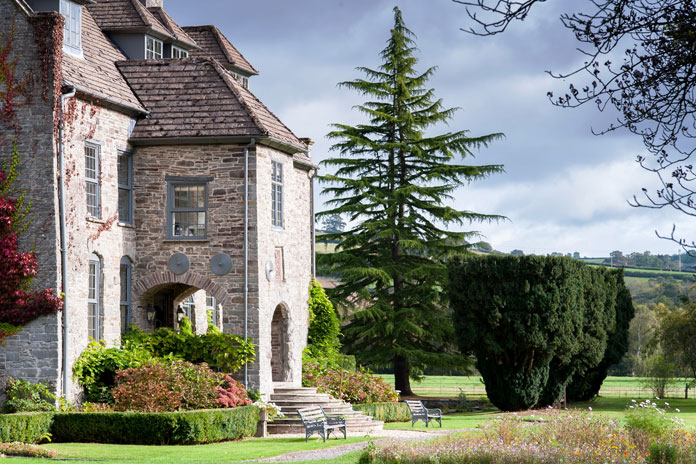 Nearby are a number of rambling experiences including Wye Valley, the Brecon Beacons, and Pen y Fan – the highest peak in Wales. The hotel can lend guests Wellington boots and suggest walking routes accessible from the hotel.

Llangoed Hall is around a three hour drive from London, with rooms priced from £150 per night.

Where to Go for an Adult Girls Holiday

The Best Hotels With a View of the Northern Lights

The Best U.S. States to Visit