Home Travel Europe 5 Reasons Why You Should Go to Lisbon, Plus Where to Stay 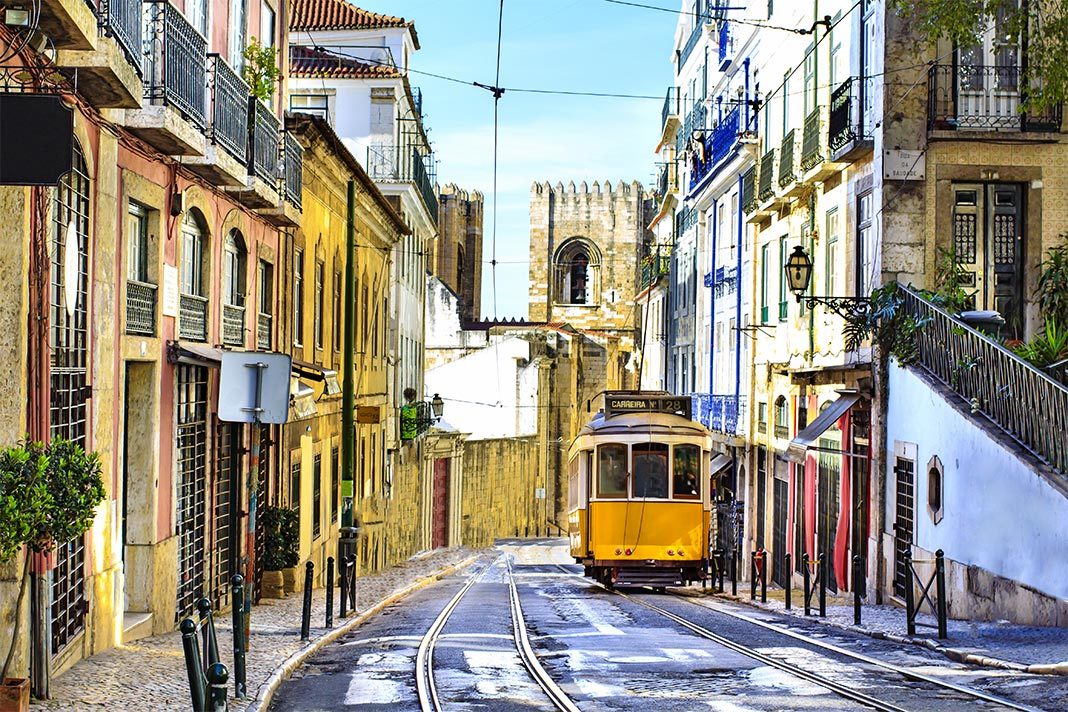 Known as the sunshine capital, Lisbon comes high on the traveller’s bucket list. From the wide, tree-lined Avenida de Liberdade to the brightly painted Insta-friendly houses in Baixa and Alfama, Portugal’s largest city has an infinite list of reasons to visit.

Here’s why we think Lisbon should be your destination of choice this summer. Plus some suggestions of where to stay while you’re there.

Even with the favourable exchange rate, Europe’s most popular cities – Paris, Rome, Barcelona – can be expensive. Lisbon however, offers similar old-world ambiance on a shoestring. The city has a wealth of free attractions and the cuisine offers high quality at low prices. Additionally, the city’s many pensãos provide purse-friendly accommodation. These are family-run inns that offer a more authentic stay than your typical hotel.

As one of Europe’s city-beach-breaks, Lisbon encompasses a little bit of everything. It’s the perfect destination for sand, sea and shopping. Estoril and Cascais beaches are just short train rides away. However they are popular with tourists and locals alike and can get extremely busy. Avoid the crowds at the slightly further afield Praia de Adraga. It’s arguably one of the most beautiful beaches in the whole of Europe.

Last year saw LAB by Sergi Arola, Loco, and Alma rise to new Michelin starred heights. Now there are six one-star establishments in the city as well as Belcanto, which boasts two. Lisbon’s proximity to the ocean manifests in a cuisine that is heaven for seafood lovers. For some of the city’s finest fish dishes, head to the famous Cervejaria Ramiro. Then get your sugar-fix with a custard tart from Pasteis de Belém. They are world-famous and provoke stretching queues along the pavement.

Lisbon is famed for it’s cheap, bustling nightlife. The streets of Bairro Alto are dense with tourist-favourite bars and hotspots.  And the surrounding areas of Cais do Sodré and Largo de Santos are the go-to’s for a disco. For old school vibes and something Portuguese, hit up Fado club in the Alfama district.

Soak up some local culture with a visit to the world’s most most expensive chapel, Sao Roque Church. Or get lost wandering the cobbled streets of the picturesque old town. Alternatively, pay a visit to the Jerónimos Monastery and the nearby Tower of Belém. Both are Unesco World Heritage Sites and a must for culture vultures. The delicate Gothic chapel of Jerónimos Monastery entombs some of Portugal’s greatest historical figures.

Best for History and Culture: Hotel do Chiado

Hotel do Chiado is located in the culturally rich district of Baixa and housed in the historic Armazéns do Chiado building. The area boasts an array of handsome buildings. It’s also flanked by the Rossio and Figueira squares and the grand riverfront Praça do Comércio.

Shopaholics will want to stay at Heritage Avenida on Avenida da Liberdade. This palm-lined, mile-long strip is a destination hotspot for designer shops. This 18th Century townhouse-turned-hotel is decorated by the Portuguese architect Miguel Cancio Martins.

This boutique hotel boasts a superb location between bohemian Bairro Alto and the trendy Chiado. The area is relatively quiet by day but comes alive at nighttime. Ideal for party-goers and the nocturnal.