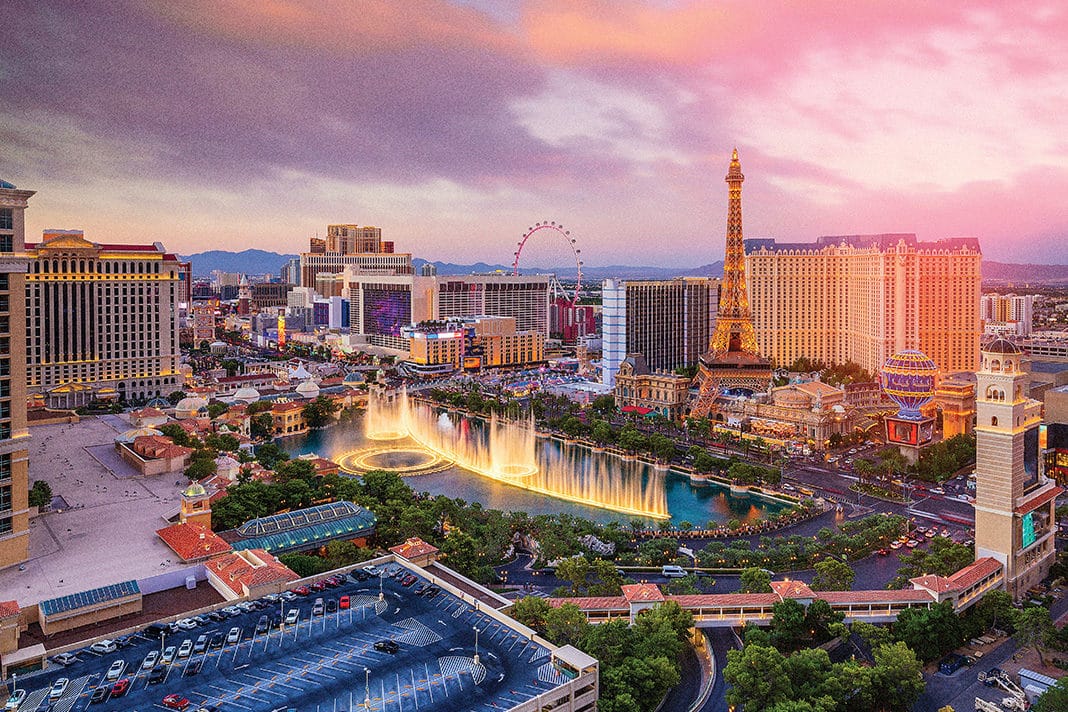 Absolutely takes in the sights and splendour of the world’s most famous strip; from luxurious pampering to eating out in style, our Las Vegas travel guide has you covered

No place on earth has quite the magnetism of Vegas. It’s the real city that never sleeps and the HQ of hedonism, made for a ‘go hard or go home’ getaway. The Las Vegas of old built a reputation on bright lights and poker tables, but today, spectacular gastronomy, sumptuous high-end spas, swanky shopping outlets and fashionable music residencies are the mainstay of the place. Once associated with boys’ weekends and stag parties, Las Vegas is quickly becoming a mecca for a fabulous girls’ trip, as groups jet off for whirlwind weekends on the strip. Creating a comprehensive guide to Vegas is impossible; an abundance of restaurants, nightclubs, shopping malls and shows means that you could spend a year there and still never know all its secrets. However, there are a number of things to tick off the bucket list first.

Vegas is big on hotels. They’re the city’s cornerstones with most of the restaurants, clubs and casinos housed within them. Astonishingly, of the 10 largest hotels in the world, seven call Vegas their home. The Venetian and the MGM Grand have nearly 14,000 rooms between them – so you shouldn’t have a problem finding a bed for the weekend. True to its name, The Venetian has been kitted out to make tourists feel at home in Venice complete with Grand Canal, life-size gondolas and singing gondoliers who will sweep you downriver beneath bridges, beside cafes, under balconies and through a vibrant Venetian streetscape. In the world of celebrity hotels, The Bellagio is another A-Lister, known for the countless films (The Hangover, Ocean’s Eleven, Rat Race, to name a few) set within its glitzy premises. Others, like New York, New York and Caesars Palace, are theme parks in themselves and well worth a visit. But bringing a cool, new aesthetic to the strip is the Park MGM. It’s the latest hotel to settle into the area, housed in what was formerly the Monte Carlo.

Park MGM is one of the venues working to rebrand Vegas for a new type of visitor, targeting those who seek well-designed but low-key experiences that offer a certain quality over quantity. The casino floor is more upscale than those of its counterparts yet the original chandeliers and ceilings from the days of the Monte Carlo, inspired by the famed Monaco casino, remain. Still, the vibe is distinctly modern, with found art, commissioned works, and contemporary art pieces, including iPad drawings by David Hockney and a multimedia dreamscape by Iranian artists Shoja Azari and Shahram Karimi.

A trip to Vegas isn’t complete without taking in a show or two, and if you’re looking for the largest congregation of women in one spot on the strip then it’s at Magic Mike Live. Based on the eponymous hit film franchise that catapulted Channing Tatum onto the Hollywood Walk of Fame, it’s prime fodder for a girls’ weekend itinerary. If you think sculpted men oiled up to the gills and thrusting around on stage in bow ties is tacky entertainment, how wrong you are. The 90-minute show is funny with a feminist slant, showcasing exceptional choreography from both guys and girls. And be sure to take a spin around the Hard Rock Hotel on your way out. It’s unlike any other hotel thanks to the millions of dollars worth of rock ‘n’ roll memorabilia stashed around the casino and lobby.

That should set you up nicely for a night on the tiles and thankfully there are more than enough bars to choose from. A cocktail crawl around the trio of slick bars that make up The Cocktail Collection will get you started. All set within The Venetian, the Dorsey opened first with New York barman Sam Ross of Attaboy and Diamond Reef at the helm. The success of this venue, a swanky outlet where you can order punch in a disco ball, led to the debut of Rosina one year later. Rosina embodies old-school allure with Art Deco flair while Electra serves up a cocktail menu that is ahead of the trend, centred around rums, agricoles and mezcals. Vegas groans under the weight of nightclubs, almost all located within the bowels of various giant casinos, so again there are rich pickings. Booking a VIP table at TAO Nightclub means you needn’t leave The Venetian.

Atone for last night’s sins at The Juice Standard in The Cosmopolitan hotel; their cold-pressed juices will bring you right back to life. Or, if it’s not a stretch too far, you can sweat it all out at SoulCycle, the spinning craze that took America’s wellness scene by storm. Classes here are high-energy evocations of a club night, albeit on a spin bike. If that does all sound a bit ambitious, sweating it out in a sauna is another perfectly viable option that no one will judge you for. Just as club nights and casinos are the order of the day, so too is swanning around in a towel robe and slippers. After all, Vegas does pampering the way it does everything else: with total excess. If you’re going to book into just one, it has to be The Spa at ARIA Resort & Casino. Having recently been awarded the Forbes Travel Guide Five-Star Award, it’s the largest five-star rated spa in the U.S and offers a deliciously indulgent treatment menu and the chance to blow away the cobwebs in a Shio salt room, relax on a heated-stone Ganbanyoku bed, or savour a quiet moment sipping herbal tea on the spa’s balcony.

Relaxed, revived and raring to go again, Violet Hour salon inside The Cosmopolitan will get you looking your best with its team of master hair stylists and make-up artists. You and your girlfriends can enlist your very own glam squad to prepare you for a night out. Champagne on the side is optional but highly recommended.

Spas, casinos and super clubs aside, the culinary scene alone is an overwhelming course to navigate. The strip is a smorgasbord of incredible restaurants run by some of the world’s most highly-regarded chefs. Nobu Matsuhisa and Guy Savoy jostle for airtime with Gordon Ramsay, José Andrés, Bobby Flay and Michael Mina. But feeding the tourists of Las Vegas – a staggering 42.12 million in 2018 – is no easy endeavour, no matter how many establishments you’ve got under your belt (Mr Ramsay alone has five). As such, the restaurant scene is a beast that continues to snowball with more spectacular dining rooms, themed restaurants and culinary concepts than you would deem possible. So where to start? A Lip Smacking Foodie Tour will do a lot of the leg work for you. Their tour, Savors of The Strip, hits the highlights of the Strip, starting at Bardot Brasserie where you can snaffle wild Burgundy escargots blanketed in flaky puff pastry and smothered in garlic butter. From here you’ll swing by Julian Serrano for innovative Spanish tapas and a convivial atmosphere, and on to Estiatorio Milos for a feast of Greek classics. Sweet teeth are satiated at Cucina by Wolfgang Puck with tiramisu, torta Caprese and mini doughnuts.

Wolfgang Puck’s Spago is another hot ticket, while Beauty and Essex and the newly-opened Catch will score you major points in the social media stakes. Catch, with an entrance lined with cascading florals and its reputation for being one of LA’s trendiest eateries, is especially noteworthy.

Las Vegas loves a brunch as much as London does and one of the best can be found at Giada De Laurentiis’ eponymous restaurant inside the Cromwell Hotel. It offers everything from lobster hash to Marmite cheese toasties. Accompany it with a glass of Giada’s own take on Frosé (frozen rosé wine, Grand Marnier, Limoncello and peach purée) and you’ll be more than ready to do it all over again.