Home What's On Absolutely goes to The Hive: an Interview with Wolfgang Buttress at Kew... 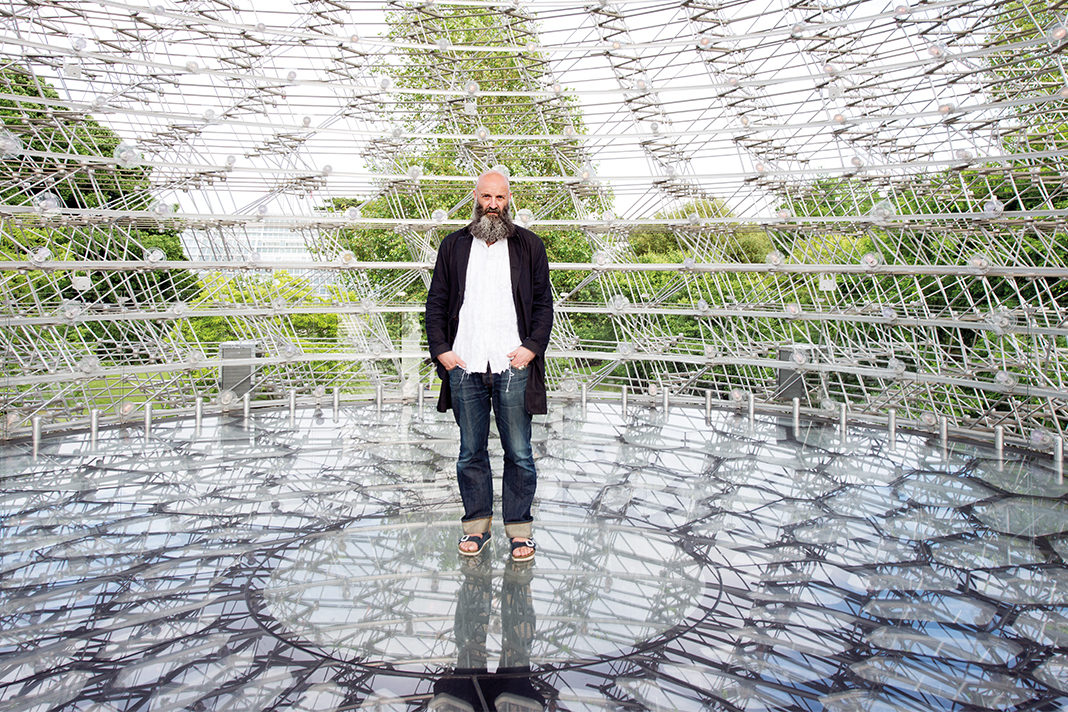 You can’t miss him. He’s very tall with a huge beard,’ says Youki Crump, my contact at Kew Gardens. Someone recently compared Wolfgang Buttress’s voluptuous beard to the Hive itself. It’s not a bad comparison. In person, Buttress is kind and smiling, enthusiastic and clever. A man at one with his intriguing fusion of art and science (and definitely not someone with bees in his beard).

Buttress’s Hive installation was an enormous success at Milan’s World Expo in 2015. It was a temporary exhibit at Kew Gardens in 2016. But when visitor numbers increased by 40% during its residency it stayed. So far no finish date has been set. It’s a fitting home for a piece that functions as a living sculpture. Representing the inner workings of a beehive that encompasses sound and vibration. Many would like to see it make Kew a permanent home.

It’s an impressive structure. Made from 170,000 metal parts it’s a feat in construction. Stand inside it on the glass floor and you’re part of one of 2016’s most instagrammed vistas. The constant hum has a changing volume that relates to the actual beehives at Kew. So guests can observe the bees’ fluctuating levels of activity.

I was expecting Buttress to be a bee enthusiast, and he is – but only as a result of working on the Hive. The project didn’t start with an obsession with bees. But with the idea of doing something inspired by the British countryside. And it wasn’t even his idea to apply for the World Expo in the first place, but one of the architects in his studio.

‘At first I was skeptical,’ he says. ‘But then I thought of taking a little piece of the British countryside over to Milan. I wanted to make it an immersive experience. But I needed something to hang it on. Something universal – something a five-year-old could understand as well as an academic. So I thought of the bee.’

And from there a series of ‘steps of serendipidy’ happened. Buttress met Dr Martin Bencsik of Nottingham Trent university. His research into bee communication had led to amazing discoveries. This included research about the sounds and vibrations involved. It was a visit to one of Bencsik’s hives that crystallised the idea for the Hive.

‘It was life-changing in a lot of ways,’ says Buttress. The sound – a deep drone – and the smell was incredible – and ‘I thought it would be great if you could express what it would be like to be inside a hive.

Bencsik’s research involves installing accelerometers in hives to measure vibrations. The next step for Buttress was to use these digital signals and turn them into light and sound. ‘We thought if the activity in the hives in Nottingham could transfer live to Milan. We’d have a sense of connection to nature and it would be a fluid thing. We wanted to create an emotional connection. Buttress became fascinated by the life of the bee. ‘It’s incredible how it can take one thing in your life; this has changed my practice as an artist.’

Having bought a new house, he’s planning bee hotels in the garden, as well as a traditional hive. ‘Bees are fascinating,’ he says. ‘They haven’t evolved in more than 120 million years. They’re in tune with the environment and they act as sentinels of the planet. Bees are a barometer for the health of the earth – if they’re healthy then the world is too. Which is what makes them so topical too, because as everybody knows, the honeybee is dying in unprecedented numbers due to climate change.

Despite bees having fascinated humans for millennia, there are still lots of things we don’t know about them. ‘Bees are superorganisms,’ says Buttress. They are one of the few insects that live all the time, collecting honey for the winter. They’re amazing at keeping a constant temperature and the bees on the outside sacrifice themselves to keep the hive warm.’

The Hive has taken on a life of its own. ‘It’s not something you admire from afar you’re inside it. Moreover you get incredible vistas depending on the seasons. And how the light hits it so it’s changing all the time. It feels alive and fluid; it’s not shouting at you, but you’re connected to it and there’s a sense of magic. Even though there’s 50 tonnes of metal in there it doesn’t feel heavy or claustrophobic. It’s open and the hexagons frame nature,’ says Buttress. If you haven’t seen it yet, then go now.

The Hive remains at Kew Gardens throughout summer 2017;
kew.org.uk

What’s on in October- All the Best in Art & Culture