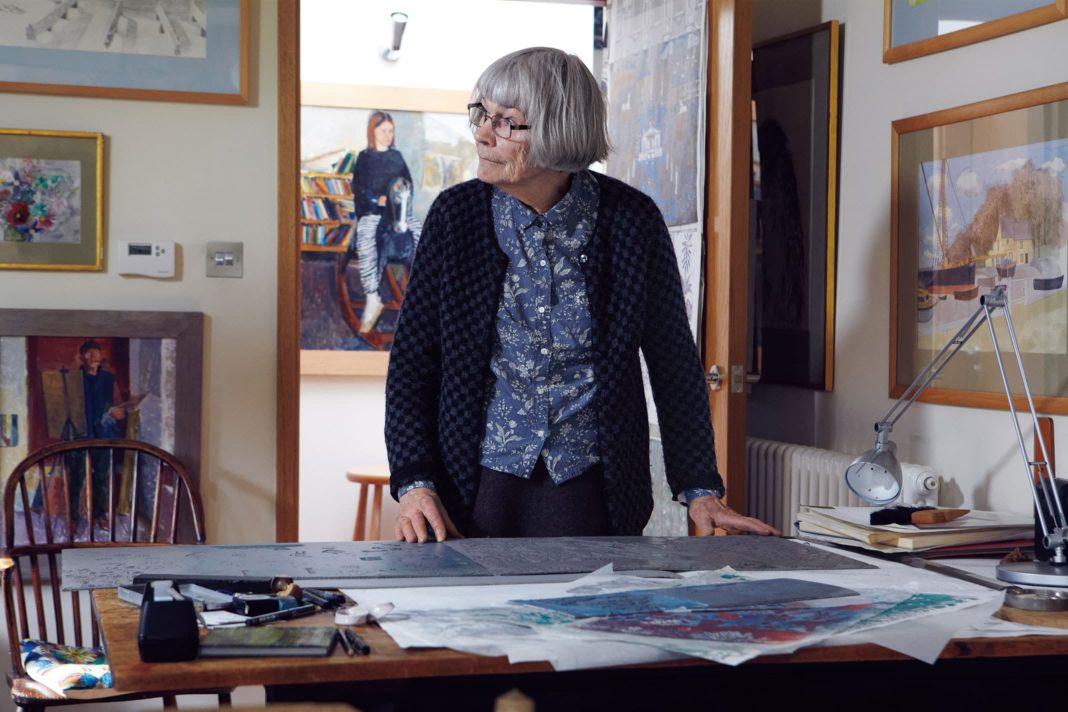 Absolutely: Can you tell us how about how you began your career?

MA: I still call myself an artist. I began my career as a painter. I went to Chelsea School of Art. We had won the war and it was a wonderful time to be there because all those great painters, like Picasso and Matisse, were still alive and working. Soon after I left art school I got married had children and moved to India for 2 years. After they were born it became almost impossible to paint but I didn’t stop being creative. I had done a bit of lino cutting and I had observed fabric printing at the art school. The thought came to me that I had always been interested in repeat pattern. I realised I could make my own blocks and print, even from home.

Absolutely:  How did your time in India affect your work?

MA: When my first child was only two months we left for India. We spent two years there as my husband was an architect designing public buildings in the Punjab. In evenings we would wander down to the bazaar where you would find men printing bedspreads on long tables in the open air. Seeing them at work, printing in their hit and miss way, made me realise that you could do things yourself. I would only need the block, some colour and paper and I’d be away. Coming back to London, I found that I could do this when the children were at school. The first paper I created was for our own house and it looked good – so I carried on and made more prints.

Absolutely: How did you create your first wallpapers? What was the process?

MA: I found the one part of the house that wasn’t used for anything else, which was the landing and made a very makeshift studio. At the local hardware store I bought lino, lining paper, paint and a small roller. I put the paper on the floor and then had to stand on the block to create pressure to make the print. It was a very haphazard process but I liked the effect and created a few designs. Eventually a friend convinced me it was time to get my own press.

Absolutely: Tell us about your press and how it developed your work.

MA: My printer friend decided that we should go to a large second-hand printing warehouse in Brixton, so off we went.

It was a vast place with machines as big as houses but hidden in the corner there was this small unloved proofing press. I looked at it and said ‘well I think that will do.’ The next thing, of course, was the paper. I managed to find half a tonne of the right paper and that’s how it all began. It wasn’t planned really; somehow it just fell into place.

Absolutely: Can you tell us about the process of creating a wallpaper design?

MA: First of all, plants are my vital source as they so effortlessly turn into a repeat – they flow over the walls and there is an endless variety that you can use. Walking round people’s front gardens I sometimes see a plant that will go into a pattern and sketch it straight away.  For me, the core of all visual art is drawing. I like to have the subject in front of me, especially with plants. In the winter I often use books and in the summer,  I draw in front of the plants themselves. I find it terribly important to have very accurate information for my drawing. To design a repeat pattern, I make a small grid of four sections and then trace everything onto it. You see what space you have, join it up and create a rhythm in the design. It’s always space filling with my design. Then I trace it onto a piece of lino and just start cutting. Once you’ve cut it it’s irreversible.

Absolutely: What was the inspiration behind your design for Jo Malone London?

MA: The Jo Malone London creative team came to see me and we had a great discussion. We thought about the river, about plants and planting and then gardens. Everybody was happy with the idea of gardens so then it was plain sailing. Henry James is a writer I’m very fond of and he happened to say that the two happiest words in the English language were ‘summer afternoon.’ I wanted to capture a perfect English summer afternoon. The garden needed to feel alive. I added the children having a croquet match, a gardener observing the scene and a little girl showing him how she can dance. There are also some cheeky foxes. My ideal garden has statuary in it and so I took inspiration from Chiswick House very near my home and studio. The lions were inspired by the ones there. As always, taking inspiration from the plants was absolutely key. You’ll find a tomato plant, pears, roses, blackcurrant, even buzzing bees to represent the honey in Red Roses. I loved drawing the bees.