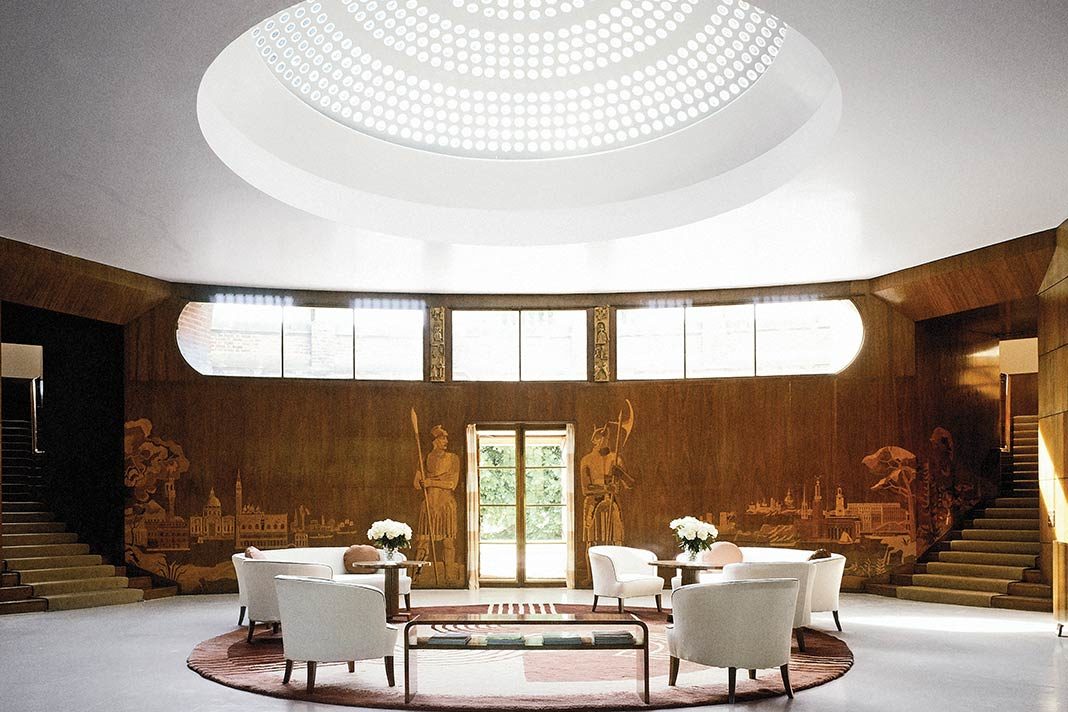 Eltham Palace’s Art Deco interior remains as breathtaking today as when it was designed in 1936. HOME takes a tour

When  Stephen and Virginia Courtauld renovated Eltham Palace, whose original shell was built by King Edward IV and later lived in by a young Henry VIII, one editorial in The Times caustically compared its merits to those of a cigarette factory. It was 1936, and the absurdly wealthy and achingly fashionable Courtaulds had commissioned the architects Seeley and Paget to transform their semi-rural new moated home into something dazzling, something that the beau monde could be tempted to make the short journey from central London to. What they created – whether contemporary critics saw it or not – constituted not only the architects’ most ambitious work, but the sublime expression of 1930s Art Deco, today under the care of English Heritage. And whatever the detractors said, it is unlikely that without the Courtaulds’ input, Eltham Palace would still be visited today – when they bought it lay in ruins, entirely open to the elements.

Few buildings have so tangibly layered a history, nor such consistently noteworthy residents. Enter the house today and you cross a bridge built in 1396 with a Tudor parapet – and then promptly walk straight into a capacious Modernist’s dream, lined in blackbean wood, crowned with a vast dome that sits directly above the circular centre piece table and adorned with marquetry panels depicting a Viking and a Roman soldier guarding the room. As interior surprises go, it must remain one of this country’s most arresting.

Furnished with unshakable commitment to the cutting edge 1930s style, Eltham Palace is awash with classic Art Deco white furniture with black piping and clever innovations that would have been eye-poppingly progressive at the time (take, for example, the concealed gramophone system, or the inbuilt vacuuming system that resembles a steam engine). But in addition to the cruise liner-style deco, complete with porthole windows, the Courtaulds, whose vast wealth came from the textile industry, also went in for quirkier flourishes. Nowhere is this more prominent than in the famous portrait of the pair, by L Campbell Taylor, which has the couple posed with another, also renowned, resident of Eltham Palace: Mah-Jonngg, Virginia’s ring-tailed lemur, whose tropical heated cage can still be seen in the house, and whose scampering presence was resentfully tolerated by the Courtaulds’ many guests. Mah-Jonngg was, by all accounts, given to biting.

The perennial line of great and good guests (the stellar role call includes Queen Mary, Gracie Fields and Stravinksy) were a near-permanent fixture at Eltham, and they were certainly well provided for, the odd lemur bite notwithstanding. For not only were well-heeled party guests met with every mod-con, including under-floor heating, but they were also greeted by two fully staffed cloakrooms either side of the lobby, as well as having the house’s very own telephone exchange at their disposal.

The Courtaulds did nothing by halves, as every room in their house attests. A flower room off the hall contains some 100 vases, all of which were in constant use, and filled with flowers from the 19-acre garden. The duo each had their own bedroom as well as designated bathrooms (Virginia’s is entirely gold, with a statue of the goddess Psyche who poses, resplendent, within a niche watching over the bath, while her bedroom’s sycamore-panelled ceiling is ribbed and coved, like that of an Odeon cinema).  Stephen even had his own private Indian mahogany-panelled library, which housed his collection of Turner drawings behind sliding screens, now on display at the Courtauld Institute. The distinctive interior embellishments all come courtesy of Peter Malacrida, an Italian aristocrat who devised the particular brand of Art Deco that dominates throughout the house, with its marriage of the latest technology with abounding classical references.

The yacht-like sensibility of much of the interior is in keeping both with the era’s voguish partiality to sleek lines and the fact that the Courtaulds were no strangers to luxury travel. In fact, such was their wanderlust that visitors to Eltham today can get an idea of the seriousness with which they plotted their global tours in the Map Room, unveiled in 2015 after a large-scale renovation. It was only discovered when someone peeled off some wallpaper to reveal part of a British roadmap; further removal of the wallpaper revealed that it was one of some dozen maps of the world that the family’s secretary used to plan the Courtaulds routes via plane, train, automobile and, of course, luxury yacht. The recent renovation removed any of the occasionally attendant stuffiness of grand houses open to the public. Rope barriers are dispensed with, except for in the library, and in Virginia’s room, visitors can even try on replicas of Virginia’s dresses.

It also opened up the cellar which, prior to the war, housed the famous vacuum, and a vast stash of fine wine, but during it became possibly the most lavish air raid shelter in London. But despite the luxury in the form of a master bedroom and 12 camp beds for servants, the shelter didn’t ultimately do enough to dissuade the Courtaulds from leaving Eltham in 1944; they departed, but only after ten bombs had fallen on the Palace, with the Great Hall had taken a direct hit. But Eltham Palace had emerged from ruins before and it would do so again. Now under the auspices of English Heritage, today it stands as a monument to the apotheosis of Art Deco as the ultimate party palace.