Home Food Twelfth Night: How to Make a Galette Des Rois for Epiphany 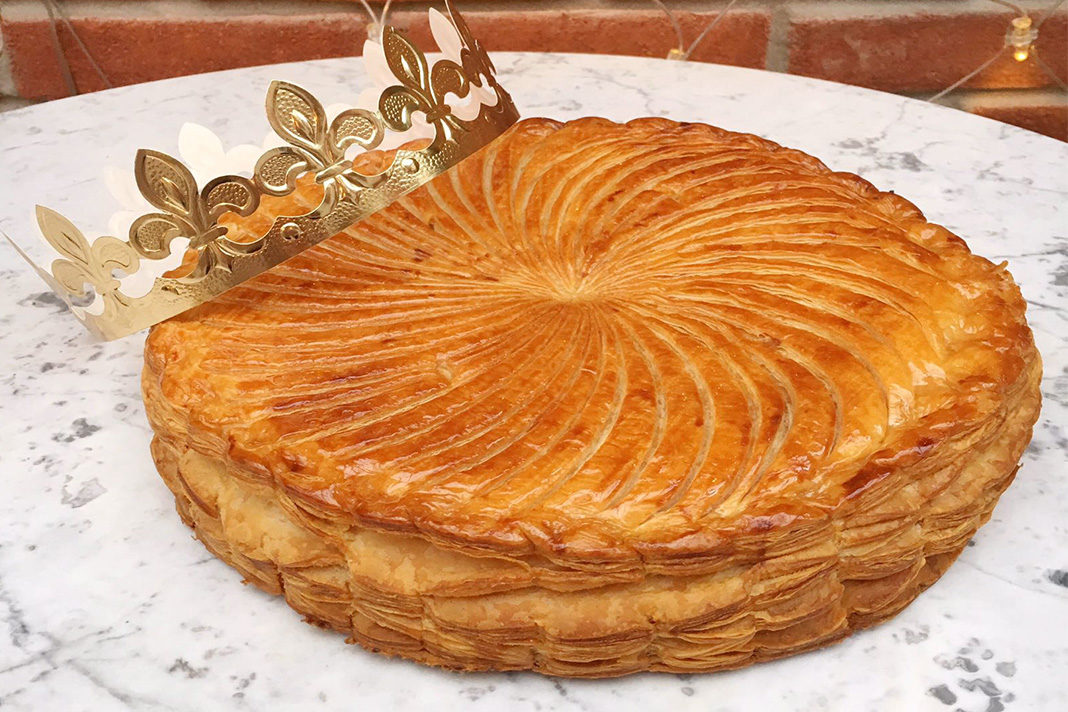 How to make a Galette Des Rois for French Epiphany

The Galette des Rois is a delicious cake steeped in tradition and on the 6th of January the cake will be eaten in thousand of homes to celebrate French Epiphany. The tradition dates all the way back to the Roman Empire, when it was eaten on the date the three kings arrived in Bethlehem.

The cake is made with flaky puff pastry and almond frangipane filling, think almond croissant in cake form, with a single porcelain fève, which is a porcelain charm, hidden in each cake. Once sliced whoever discovers the charm is king or queen for the day and can summon their friends and family for their every whim.

The following recipe for the Galette Des Rois comes from Dominique Ansel’s bakery. When recreating the cake Dominique decided to use reversed puff pastry to make the crust. This is done by wrapping the butter around the outside of the dough rather than inside resulting in more flakier puff pastry and stronger caramelisation when baked.

The Galette des Rois should be served warm and can be paired with sparkling Champagne or light sweet wines from Loire Valley.

For the Puff pastry dough (this should be done the day before):

140g bread flour (plus more as needed for dusting)

1. Combine the bread flour, salt, vinegar, cold water, and butter in a stand mixer fitted with a dough hook. Mix on low speed until just blended, about 2½ minutes. The dough should look rough—there’s been no gluten development at this stage.

2. Dust the work surface with extra bread flour. With your hands, shape the dough into a 4-inch square about ⅜ inch thick. Cover with plastic wrap and refrigerate until chilled.

1. Combine the all-purpose flour and butter in a stand mixer fitted with a paddle. Mix on low speed, until there are no streaks of butter. The mixture should still feel like soft butter.

2. Draw a 7-inch square on a piece of parchment paper with a pencil. Flip the parchment over so that the butter won’t come in contact with the pencil marks. Place the butter in the centre of the square and spread it evenly with an offset spatula to fill the square. Refrigerate for about 20 minutes, until firm but still pliable.

3. Remove the butter from the refrigerator. It should still be soft enough to bend slightly without cracking. If it is too firm, lightly beat the butter with a rolling pin on a lightly floured work surface until it becomes pliable. Make sure to press the butter back to its original 7-inch square after working it.

Whenever folding butter, it is important to work swiftly to ensure it doesn’t melt.

1. Generously flour the work surface and rolling pin. You’ll need a rather large work surface for this task. With the rolling pin, using steady, even pressure, roll the butter-covered dough out from the centre so it triples in length. When finished rolling, you should have a rectangle about 12 by 6½ by ¼ inch.

2. Place the dough so the longer sides run left to right. From the right side, fold one-third of the dough onto itself, keeping the edges lined up with each other. From the left side, fold one-third of the dough on top of the side that has already been folded. Line up all the edges so that you are left with an even rectangle. The dough is being folded as if it were a piece of paper going into an envelope; this is called a “letter fold.” Wrap the dough in plastic wrap and refrigerate for 15 to 20 minutes to rest.

1. Remove the dough from the refrigerator. It should be firm but not hard. Place on a lightly floured work surface. With a rolling pin, using steady, even pressure, roll the dough out from the centre vertically from top to bottom. The dough should triple in length and increase in width 1½ times; this will take several passes. When finished, you should again have a rectangle about 12 by 6 ½.

When rolling out the dough, it’s always best to have the open seams on the top to ensure the layers remain even and don’t slide when you are rolling.

For the almond Frangipane:

1. Heat milk in a medium pot over medium heat until it reaches 65°C.  Remove from the heat.

2. In a bowl, whisk together sugar, cornstarch, and egg yolks.

4. Transfer to a bowl and cover tightly with plastic wrap pressed directly against the surface to prevent a skin from forming.  Refrigerate until completely cooled, about 30 minutes to 1 hour.

1. In a large bowl, fold the pastry cream and almond cream together until combined.

2. Transfer to a piping bag. Refrigerate until ready to assemble the Galette.

2. Remove the puff pastry from the refrigerator. Place it on a lightly floured work surface. With a rolling pin, using steady, even pressure, roll the dough out from the center, until you have a rectangle that’s 1/8” thick. Cut out four 8-inch round discs.

3. On a baking sheet lined with parchment paper, lay out two discs of puff pastry dough. Brush the edges with water. Pipe a layer of almond frangipane (just under half of the frangipane), leaving 2cm border around the edge. Place the other puff pastry discs on top and press down to seal the edges very well. Chill in the refrigerator for 5 minutes.

4. Remove the Galettes from the refrigerator. Flute the edges of the Galette. Brush the top of the Galette with egg wash. Then using a paring knife, score the top in a decorative pattern, to resemble a crown. Bake for 45 minutes, until the puff pastry if beautifully golden brown and flaky. Slice and serve warm or at room temperature.

Do not refrigerate the Galette, as the humidity in the refrigerator will cause the puff pastry to get soggy.

The Galette des Rois from Dominique Ansel’s bakery is available to order from December 26th to January 21st, with 48 hours advance notice, for collection at the Bakery at £30 for the whole cake.