Home Lifestyle Interview: Catch Up with Ed Goodale ahead of his Performance at Henley 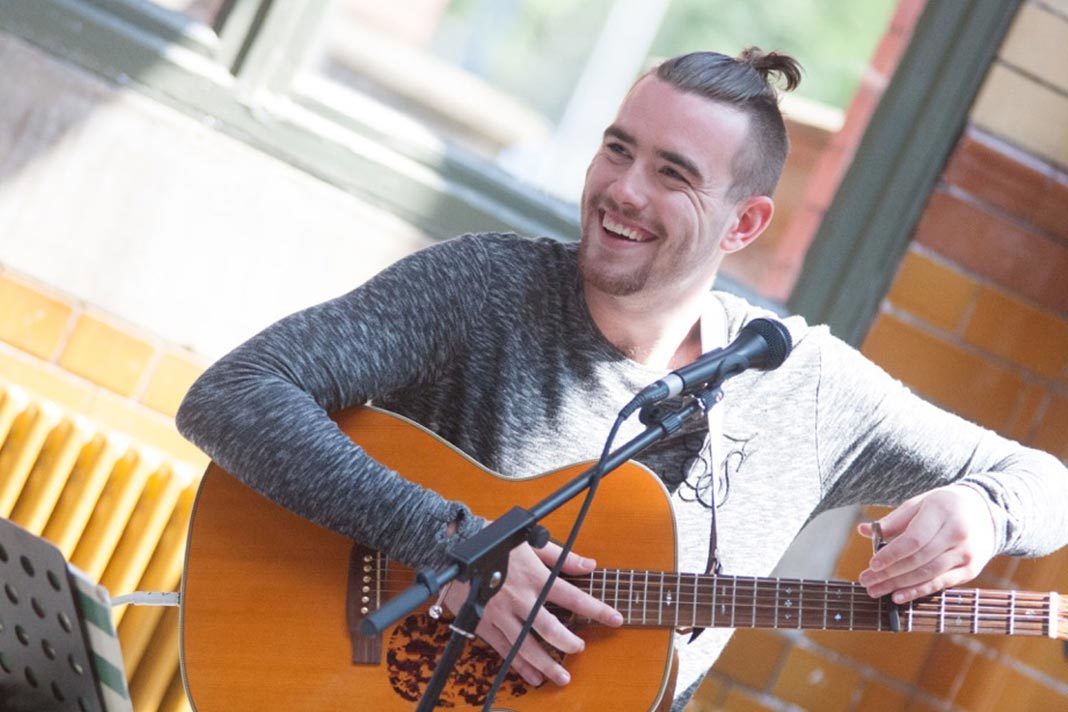 Ed Goodale is taking the British music scene by storm; we caught up with him in the midst of his summer serving the festival scene...

Ed Goodale is the singer/songwriter rapidly establishing himself on the acoustic and roots scene. Having been diagnosed with Asperger’s Syndrome, Ed lives with ‘a gift’, that provides acute observation and interpretation of life. His lyrics are thought-provoking, highly mature and connect profoundly with his audience. Despite his young age, Ed has played extensively at gigs and festivals throughout the UK and Europe, including Glastonbury this year. His lively set with brother Ollie on percussion draws a crowd to every stage he plays. We caught up with him ahead of his performance at Henley Festival this week…

What’s your biggest source of inspiration when it comes to songwriting?

I write my songs about how I see the world; my first song was ‘Symptoms’, which is my interpretation of living with autism. I have gone on to write songs about holidays (‘Paradise’); my first ride on the London Underground which I found quite scary (‘Coming Up For Air’) and generally about life as I see and feel it. One of the first lines I wrote was ‘The Feelings and Spaces Around’ which I guess sums it up.

What music were you influenced by growing up?

We grew up in Scotland and my dad was really into Celtic music, fiddles, pipes, the whole works. My brother and I grew up with some fantastic Scottish bands like Runrig (who we have seen and met about a dozen times), Wolfstone and loads of others. We also grew up with bands that my dad loves like Show Of Hands, Big Country and Marillion. I also went through the teenager music stuff with deafening metal music and other genres. Basically, I love all types of good music. I’ve just come back from Glastonbury and saw and loved everything from Steve Harley, First Aid Kit, The Dropkick Murphys – anything that is good music I listen to and it is so easy to find music today.

Was there a defining moment when you realised singing and songwriting was the career path for you?

Going to Glastonbury Festival in 2010 – I had never seen anything like it; something new and amazing in every corner and different sounds from all directions. I was having a difficult time at school due to my Asperger’s and my release was to shut myself in my room and strum away on a guitar I had been given one Christmas. I loved it, I was producing music and it sounded good.

Soon I started to put some words to these tunes; I wrote about my life and how I saw the world. One tea time in 2011 I told the family I was going to sing a song on the open mike stage at the local festival. Yes I was nervous but it felt so right; I got up there and sang ‘Sometimes’ and people loved it. At that moment I crossed a line and found my path in life.

How much of a role does Asperger’s play within your music and songwriting?

Early on it played quite a significant role as I was able to write some nice songs that people liked and we did a lot of work with the National Autistic Society. Asperger’s still drives me on and I get inspiration for writing through the way I see the world. Over time though I have become more confident on stage having played loads of gigs and festivals and I now have Ollie my brother alongside me playing percussion. We have such a blast on stage which really helps.

I still have my little ways pre and post gig as well, and I like having my mum and dad around as well for reassurance and checking everything is ok with sound, lights etc. So yes it does define me but I am starting to think my songs and our live performances stand on their own.

Without your diagnosis, do you think you would you be doing the same thing?

Probably not. It took a while to get diagnosed as being on the spectrum and up to then I had difficulty in education. Mum and Dad spent as much time at school as I did. When I was diagnosed a lot fell into place not just for me but for the family and everyone around me including teachers. I have a very supporting family who have encouraged me and helped me in my music career – if I had not been diagnosed they would still have been supportive but I may not have found my music and I am sure I would not have been as happy as I am now with such a purpose in life.

If you could collaborate with anyone currently on the music scene, who would it be and why?

Your question is a difficult one for me as I am quite single minded about my music but there are so many great people out there – I steer clear of all the excitement of TV music shows as I like to do my own thing and not be told what to sing. I get great inspiration from meeting musical heroes so I guess if Sir Paul McCartney, Steve Harley or Steve Knightley from Show Of Hands said come on let’s write a song or come and join us on stage that would kick me on a bit.

What are you most looking forward to about playing at Henley Festival this summer?

Henley Festival is a really great opportunity for Ollie and I. It will be a different vibe to Glastonbury but to play at such a prestigious wonderfully organised festival in such a nice place really means a lot to us, and that people are starting to connect and like what we do gives us such a lift. We are playing the Bedouin tent on the Thursday evening, following which we will take in the Pet Shop Boys.