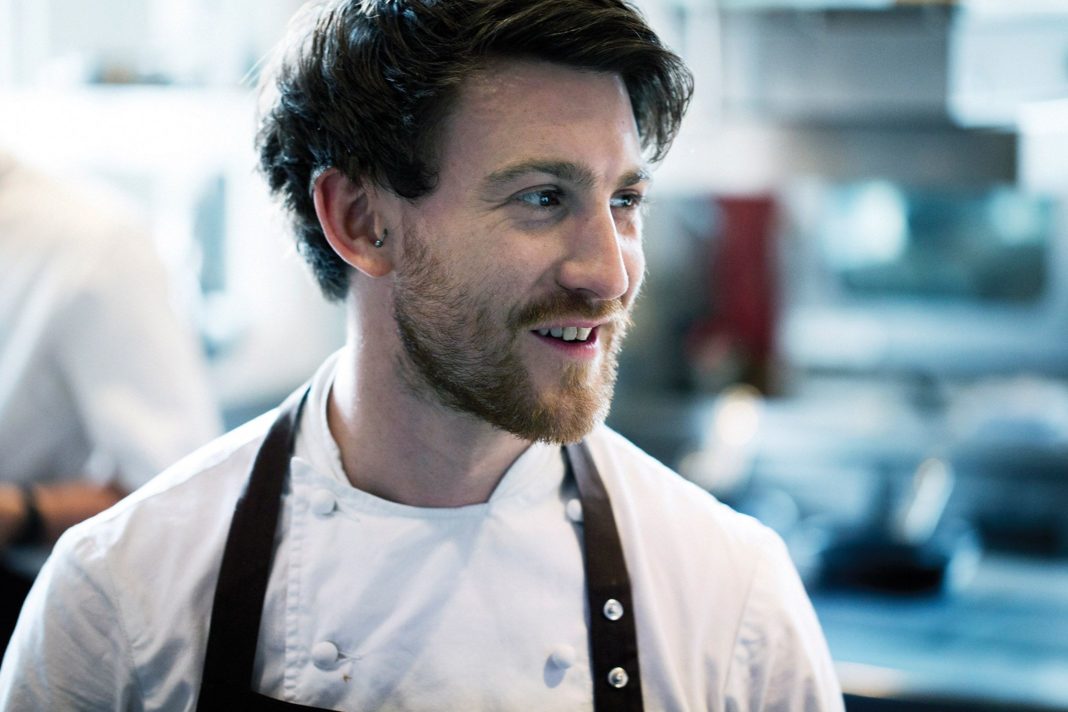 We catch up with Lee Westcott, Head Chef at Typing Room, to talk about seasonal cooking, East London hipsters and why the customer isn’t always right

Catherine Hales: When did you first start cooking?

Lee Westcott: When I was 16. Well, I didn’t really start cooking – I was washing up in a country pub near my home town. Saw the chefs cooking and thought it looked pretty cool and wanted to get involved.

CH: Where are from originally?

LW: Hertfordshire, Stevenage and my family wasn’t foodie at all. My mum’s a good cook but I didn’t grow up on a vineyard, my dad wasn’t a butcher or anything like that. I fell into it and realised I enjoyed it.

CH: Does the restaurant you have here, Typing Room, have some involvement with Jason Atherton?

LW: So, I worked for Tom Aiken for four years as his head chef and then I left, which was a pretty big deal and then Jason contacted me and I went to Hong Kong to run one restaurant and work in another for him. Then I realised Hong Kong wasn’t really for me – it either is or it isn’t, it’s kind of a party place. I wanted to come back so I said, ‘Jason, I want to come back if there’s anything about?’ He said, ‘Do you want this restaurant?’ I said yes and that was pretty much his involvement.

CH: He just set you up with it?

LW: Yeah, it’s not his food, not his design – he hasn’t had any input, really. He’s just there for me if I need it. He’s been very kind to give me free reign.

CH: What drew you to this place?

LW: When Nuno Mendes was here, I worked here for a couple of weeks and I kind of fell in love with the room and the kitchen downstairs – and his food. So when I got offered this, I realised I’d got big shoes to fill and I was incredibly nervous but I remembered the place from those years ago and I had to. Plus, the fact that we were allowed to redesign the restaurant… We changed this room [gestures to dining room].

CH: What’s the name derived from?

LW: It used to be an old typing room from when the building was a real town hall. Little old ladies, sitting there, typing away.

CH: How would you describe the menu here? What’s the style?

LW: The style would be… it’s all seasonal, although we don’t do a full menu change every season, that would be stupid. We do it dish by dish, as and when ingredients go in and out of season. It’s mainly British seasons but it’s based around European seasons as well. It’s casual fine dining, we try to be less formal in the restaurant and it’s the same with the food. We don’t want you to be confused by what you’re eating but it’s done in an elegant and technical way.

CH: Did you enjoy Hong Kong at all?

LW: I did, I did like Hong Kong – there’s just something about London that I love and I really missed it.

LW: Before I came here I hadn’t really done much in east but I don’t think I’d live anywhere else now. Full of hipsters, which is a bit wanky sometimes but overall you’ve got everything you want. There’s a lot of competition around here as well but in a good way, in a creative, supportive way.

CH: Do you have a cooking hero?

LW: When I was younger it was definitely Gordon Ramsay and Jamie Oliver, same as everybody elses, but since I worked with him, Tom [Aiken]. Jason’s a big inspiration. René Redzepi, now. You just sort of look up to every older chef who’s been through the mill because you know what they’ve been through. Opening restaurants is stressful.

See, I hate that “signature dish” thing – but we do have one

CH: Do you have a signature dish?

LW: It’s our cauliflower dish [Yeasted Cauliflower, raisins, capers and mint] and it’s the one dish that hasn’t gone off the menu since day one and it’s still the one dish that gets spoken about the most. So I guess if we have to have one, it’s that.

CH: Do you have any hobbies outside cooking?

LW: That’s an interesting question – when people ask it you realise how boring your life is [laughs].

LW: No, no its fine, I do – I love music, I love going to the gym. That does sounds boring, doesn’t it? Nothing out of the ordinary; I love eating out and socialising and drinking.

CH: Do you have an ultimate ambition?

LW: I suppose to be a businessman, not a chef, is the ultimate ambition. For the last 12 years I’ve worked 80 hour weeks, sometimes more, but that’s the average. I want to get to a point where I’m not doing that anymore but still doing what I love, which is giving customers something that they love and appreciate. I’d like to own a fine dining restaurant, a bistro that makes lots of money and a pub, a nice country pub that you could go to on a Sunday. I’d like to own a bar, too, a really cool bar. Have a little empire – not a massive one, just a small empire.

CH: Do you get many benefits from the restaurant being in a hotel?

LW: Yeah, you do. And you get a lot of diversity. This hotel’s quite diverse itself. We get youngsters, we get hipsters, we get the older crowd, we get people from New York who fly over and only ever stay here and are wowed by the food.

CH: Any disasters in the kitchen? Have you ever had anything go spectacularly wrong?

LW: We’ve set fire to the stove, one of my chefs caused a fire with a blowtorch. The gas didn’t work for a week so we had to cook in various interesting ways – a lot of improvising. You still get by.

CH: Any feedback that’s stayed with you?

LW: It’s always the worst feedback that sticks with you. We get brilliant feedback, which is great – I’ve been compared to René, which is ridiculous. I actually felt quite insulted in a way because they don’t know what they’re talking about [laughs]. But it’s the bad that sticks with you. We had a table of two sat over there, said they didn’t enjoy one thing on the menu, that it was the worst experience they’d ever had in their lives. He said his wine was corked – we then realised that his wine had never had a cork, it was a screw top. So he was just being an arsehole.

LW: I know. I asked him to leave and the whole room clapped. As soon as they left everyone else said, look we’ve eaten the same food as them and it was fucking amazing. You just cannot please everybody.

CH: Some people use eating out as an excuse to behave their absolute worst.

LW: Yeah, because apparently the customer is always right. Which is a load of bollocks.