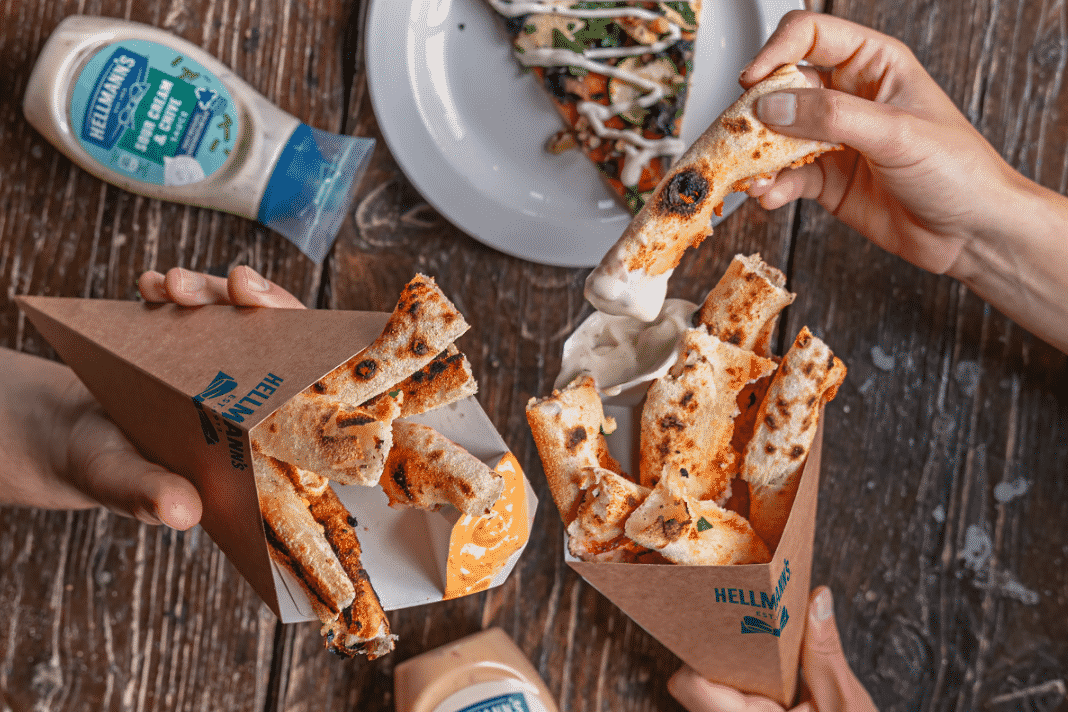 August 2021: Hellmann’s has revealed there is no topping the nation’s love for pizza, with 98% tucking into the Italian staple at least five times a month – equating to 60 pizzas per year and an average of 4,986 pizzas over a lifetime2.

The research also revealed that Northerners’ pepperonly have eyes for the doughy stuff.  Newcastle tuck into a slice of the action 6 times per month, with Glasgow and Manchester eating it 5 times a month. When it comes to the nation’s idea of a ‘perfect pizza’, the most popular toppings were revealed to be Meat Feast (22%), Pepperoni (17%) and BBQ (10%).

While the saucy centre of the pizza has stolen a slice of Britain’s heart, we are a nation divided when it comes to the humble crust – with 1 in 5 Brits choosing to ditch them. What’s more, when quizzed on their crust consumption habits, over half of Brits (54%) consider the crust to be the best part of the pizza, while 46% strongly disagree.

Of those who can’t stand the doughy pizza ends, a whopping three quarters ditch them because they are too dry to eat (50%) and lack flavour (26%) – resulting in perfectly good pizza crusts going to waste every year.

Not only are Briton’s undecided on whether to eat the crust, they also can’t decide how to eat them. Should they be eaten slow and steady or left ‘till last? Should they be gently charred or deliver a blistered crunch? In fact, almost half of Brits (45%) indulge in a cheesy stuffed crust, whilst a third (34%) opt for thin and crispy. But perhaps most importantly, what dip is best paired with a pizza crust?

A quarter of the nation (25%) confess they can’t eat their crusts without a tasty dip and three quarters (75%) state they would be more inclined to eat their crusts if they found the right dipping sauce. Hellmann’s believes its creamy, flavourful dips – including new flavours Cheese and Sour Cream & Chive – could be the solution to bringing excitement to a variety of dishes and avoid Brits binning their tasty leftovers.

As part of Hellmann’s mission to create a nation of food lovers and fight food waste, the brand hopes to remedy Britain’s ‘crust issues’ by raising awareness that its sauces double up as dips and encourage the nation to dip their doughs into its new and existing flavour range. To do this (and to delight existing crust-lovers across the nation) Hellmann’s is inviting consumers to visit its FREE London pizza pop-up this September 11th and try a taste of its condiments and crusts menu.

The team at Hellmann’s is hoping to steal a pizza the nation’s heart and convert crust leavers into lovers with its saucy pairing menu. Hellmann’s delicious and versatile sauces on offer, will include:

“At Hellmann’s we believe food is too good to waste, and, with a clear division on Britain’s dippers and ditchers, we want to help rescue crusts from the bin and play a part in eliminating food waste across the UK. We’re delighted to expand our flavoured range, with the introduction of new Cheese and Sour Cream & Chive flavours. We hope this widened offering will inspire anyone considering binning food to find a love for their leftovers using our tasty sauce – starting with the perfect dipping companion for pizza crusts.

“With findings revealing that 80% of Brits are asking for more pizza dipping sauces in supermarkets, the special condiments & crusts menu from our pop-up truck in London is set to make the humble crust the star and encourage consumers to get creative with our sauces and dip instead of ditch – we can’t wait to see how many pizza leavers we convert!’’

Located at Victoria Station, London from midday until 18:00 on Saturday 11th September, Hellmann’s is calling out to all pizza lovers and leavers to crust in their condiments and try the must-have pairings for FREE.