Home Home Curiousa & Curiousa: The Story Behind the Art of the Glass 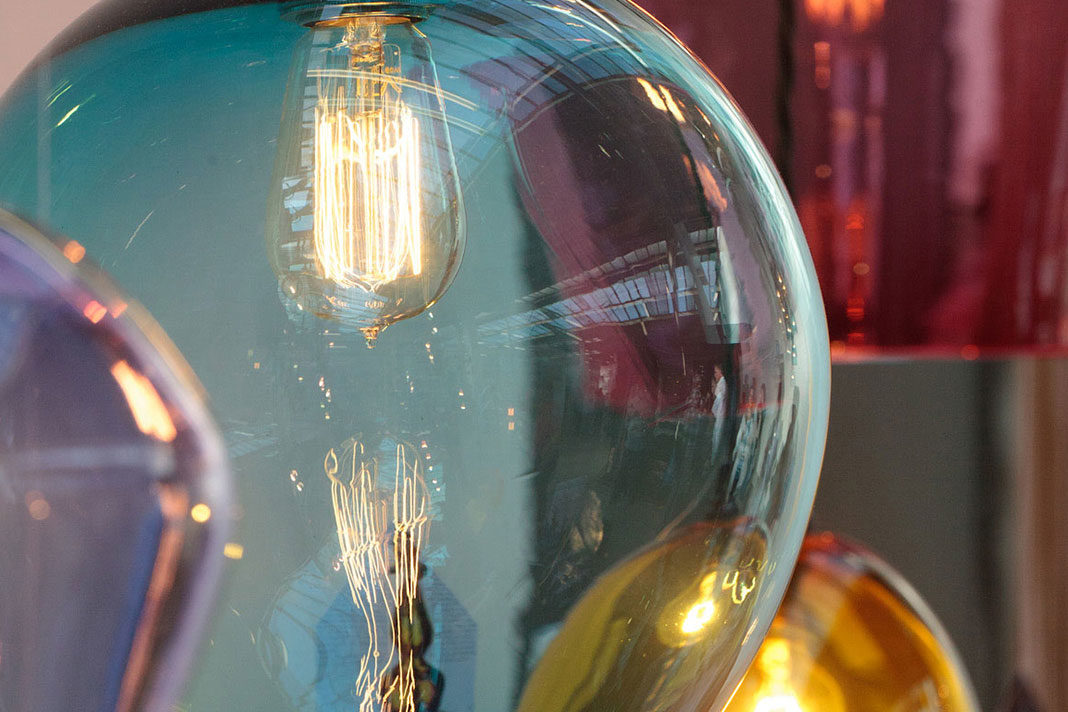 There is something slightly magical about them that you can’t quite describe,’ says Esther Patterson. We are in her Islington shop, surrounded by the jewel-like glass domes that make up her lighting collection. It’s hard to take your eyes off these pieces – they’re so perfectly formed, the colours so vivid, the quality of the glass so shiny that they’re almost otherworldly. Single pendants, clusters and chandeliers dangle from the ceiling creating an ethereal world of mesmerising colour. Patterson’s pieces are all hand-blown in the UK and her success story is astounding.

‘I think I hit on a niche that was about to explode,’ she tells me. ‘Until a few years ago, coloured glass lighting was mostly very intricate and detailed, mostly from Murano, and I think people were ready for something else. My pieces show the beauty of glass but pared back, in more modern shapes that keep the elegance of the vintage ones.’

Britain may not be known for its glass-blowing tradition and the craft has dwindled over the years, but there are scatterings of glass blowers all over the country, and a new interest in it is emerging. Curiousa’s pieces are all made in Derbyshire by a glass blower with 40 years experience, because learning these techniques is something that takes a lot of time. They’re simple, with none of the fussiness that often characterises blown glass, and they feel very contemporary.

Patterson herself is friendly and open, with a Northern lack of pretension. The first thing she tells me is that she didn’t start out with glass. Her background is in designing and making things in lots of other materials – and she started a career in graphic design. But a need to make things meant that ‘there was always something missing’ so she kept taking classes in ‘things like pottery and printing’ until eventually she enrolled in a course in Decorative Arts at Nottingham Trent. ‘For me it was bliss, because the course covered everything. I had three years’ immersive experience with printing, paper, metal wood, ceramic and glass.’ Veering towards fabric and wallpaper design, she kept an interest in ceramics and was working on bone china lighting in simple shapes when her eureka moment came. ‘We spent a day with a glass blower and were invited to design something for him to blow. I thought it was incredible when a lamp that had taken me eight months to make in bone china was blown in glass in an afternoon. I loved the colour and the shapes and knew I wanted to incorporate glass into my products.’

When designing for glass blowing, Patterson sketches in a notebook then finalizes drawings in Illustrator as 2d shapes with dimensions – but as she explains: ‘the beauty of them being free-blown is that you get slight variations with each one, and I see that as a positive. Every one is individual.’ Which brings us back to the skill involved. Is she tempted to learn? ‘No. I’ve tried – but I like to be good at everything I do, unfortunately, so I’d probably have to be blowing glass for 20 years first. I’ve got my skills.’

To make a similar dome or orb-shaped piece in china, several steps are involved. ‘Before you do slipcasting in bone china you make a mould, before that you make a model. Then you fire it and it might wilt in the kiln. So it takes much longer. And you can tell when things are moulded, they’re all the same.’ Free-blown glass is faster, and results are less uniform.

It was at design festival Tent in 2010 that Patterson’s work was spotted by Elle Decoration and Liberty, and her business took off.

She had created a roomset featuring her fabrics, wallpaper and glass lamps – and it was the lamps that caught on. Initially she would sell them from her workshop in Derbyshire, and she still does, but a presence in London is what she calls ‘the icing on the cake, really’ and her Amwell Street neighbours include Timorous Beasties and Wallace and Sewell. ‘We thought it would be interesting to see what happened if we had a space in London and it’s a lovely location.’ Though she’s enormously modest and down-to-earth about it, her story is a huge success. To graduate and have your first collection stocked at Liberty, and to be running successful business with a shop in Clerkenwell within a few years is not the typical design path. ‘It was instinctive really,’ she insists. ‘And also partly luck. If I hadn’t met the glassblower I’d probably have done something but it probably wouldn’t have been so successful.’

Curiousa and Curiousa’s beautiful glass pieces are hand-blown to order, so people can specify their exact colours, shapes and sizes – and choose from a range of light fittings and flex too. Patterson’s interest in combining materials has led to a variety of collaborations that bring wood, tassles and Swarovski crystals to the pieces – and this is something that she’s keen to expand on. Expect to see more of her.