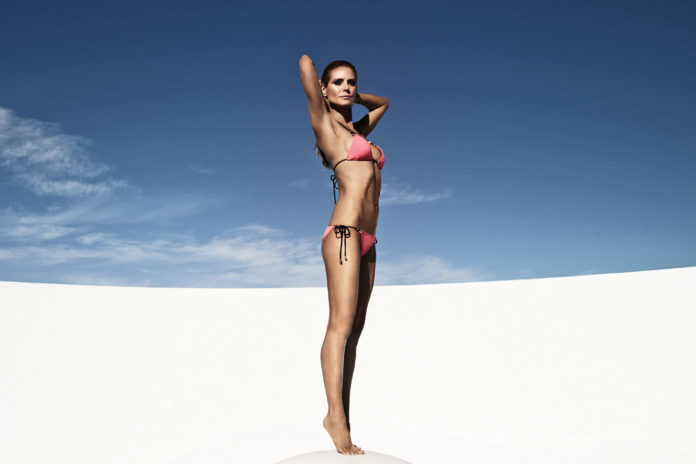 Model and designer Heidi Klum has launched her own brand of swimwear. Absolutely meets her

Heidi Klum is sitting under a spotlight in the Soho Hotel surrounded by several rails full of bikinis. She is in London – briefly – to launch Heidi Klum Swim, an extension of her Heidi Klum Intimates brand, and she is radiating enthusiasm. In fact she is simply radiating – her big smile, open face and winning charm make her instantly likeable. Not for Heidi the frosty princess manner. Her entourage, however, is a different story. We have been firmly instructed not to veer the slightest bit away from the subject we are here to discuss, which is her new swimwear range.

When she says swimwear, she really means bikini bottoms, because she herself has little interest in wearing a top part

Klum may be German by birth, and broadcast weekly on German television’s huge hit Germany’s Next Top Model, but she lives and works in LA and sounds almost entirely American, apart from occasional turns of phrase. When she says swimwear, she means bikinis – and by that she really means bikini bottoms, because she herself has little interest in wearing a top part. But swimwear, as Klum discovered, is almost as technical as lingerie, which she has been designing for some time. ‘Yes, a bra is just like a phone! There’s so much technology. Whether it’s a flexible underwire or a half underwire, there’s always a new invention. And the pads too. Did you know we make memory foam bras?’ So for the new swimwear collection, the technical details were just as important as the design. Starting with the hardwear, which Klum has strong opinions about: it mustn’t rust, or be too brash. ‘Nobody wants a huge H on their back!’ And the fabric has to be just right. ‘You need to make sure they don’t fall off or start getting weird when they’re wet. They all have to be tested.’

Klum is one of the world’s highest earning models. Despite having featured on the covers of several editions of Vogue and worked as a Victoria’s Secret Angel, she hasn’t forgotten that she started out as a catalogue model. ‘People used to say

I’d never be anything else, so when I got my first French Vogue cover it made me feel an inch taller.’ She counts working with photographer Peter Lindbergh among her career highs, and cites ‘jobs that make me overcome my fears’ as her favourites. ‘When I shoot Germany’s Next Top Model it’s a live show in an arena full of 15,000 people and I have to talk for three hours. It’s terrifying. I’m trying to have fun but I’m scared – we have people like Justin Bieber and Lady Gaga sitting on the sofa and I have to interview them and I have people shouting in my ear about commercial breaks, and millions of people watching at home. It’s nerve-wracking.’ The show is filmed in LA, as a concession to Klum’s family commitments; she has four children at school there. ‘So I go to Germany and cast the girls, then I take them to Los Angeles and film it there and I’m home at the end of the day.’ 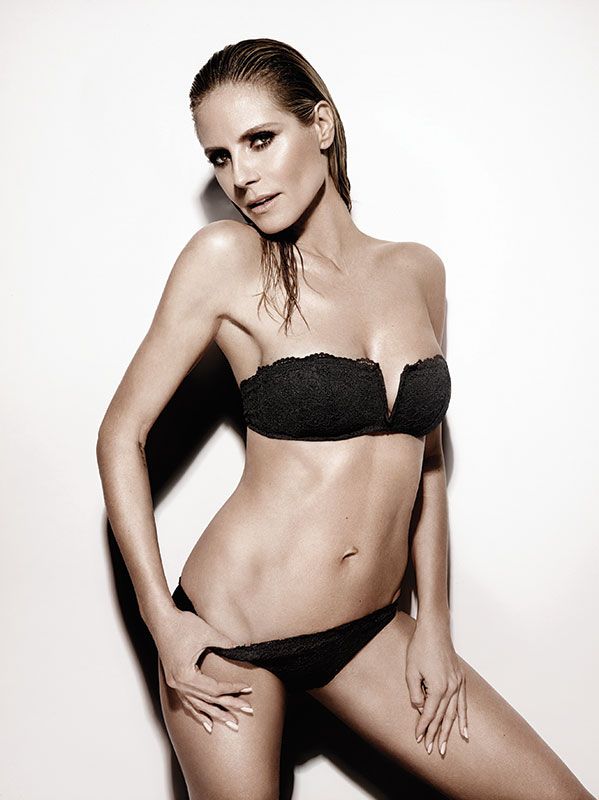 Casting young models must be a tough job. Can she tell immediately who’s in and who’s out? ‘ Yes, you can see who’s got it. But even though there are so many beautiful girls, not all of them can perform in front of a camera or step into a role. You have to be able to perform.’

It’s a well-trodden path from modeling to designing, but Klum is careful not to design just with herself in mind. ‘If I did it would probably be just bottoms, not tops! I mean I’m more of an itsy bity teeny weeny girl myself and my top comes off on the beach. I’m not a big fan of tan lines. So I try to think about the girl who wants more coverage. I know that a lot of girls like push-up – I don’t like that, but I have to think about what other girls want to wear. And I have the hardest time with one-pieces, because I never wear those myself.’ With 2,000 stockists around the world, there are also the different markets to consider. ‘When you go to the beach in Australia it’s a very different look from anywhere else. Everyone’s in long sleeves and hats with flaps down the back – and then in St Barts everyone has hardly anything on.’

On the beach, of course, Klum wears her own designs – ‘I like the tropical, fun ones because I’m often on an island, shooting something’ – and off the beach, she likes to ‘have fun with fashion’. Though as she admits, this means that ‘people sometimes hammer me for my choices. I wore a big Zac Posen gown to collect my Bambi award and I felt like Grace Kelly.’ But usually she likes to wear pieces by the Olsen twins – ‘they do a great job, they go to the fabric shows, just like how I do my stuff.’

Heidi Klum Swim is available at House of Fraser, John Lewis and online at Figleaves and ASOS as well as at select boutiques nationwide. Prices range from £43-£145

Peeling away skin imperfections with Skinfluencer

One for the guys: A selfcare day with Laban London Barbers