Home Home Children’s Design: An Interior Created with a Child in Mind 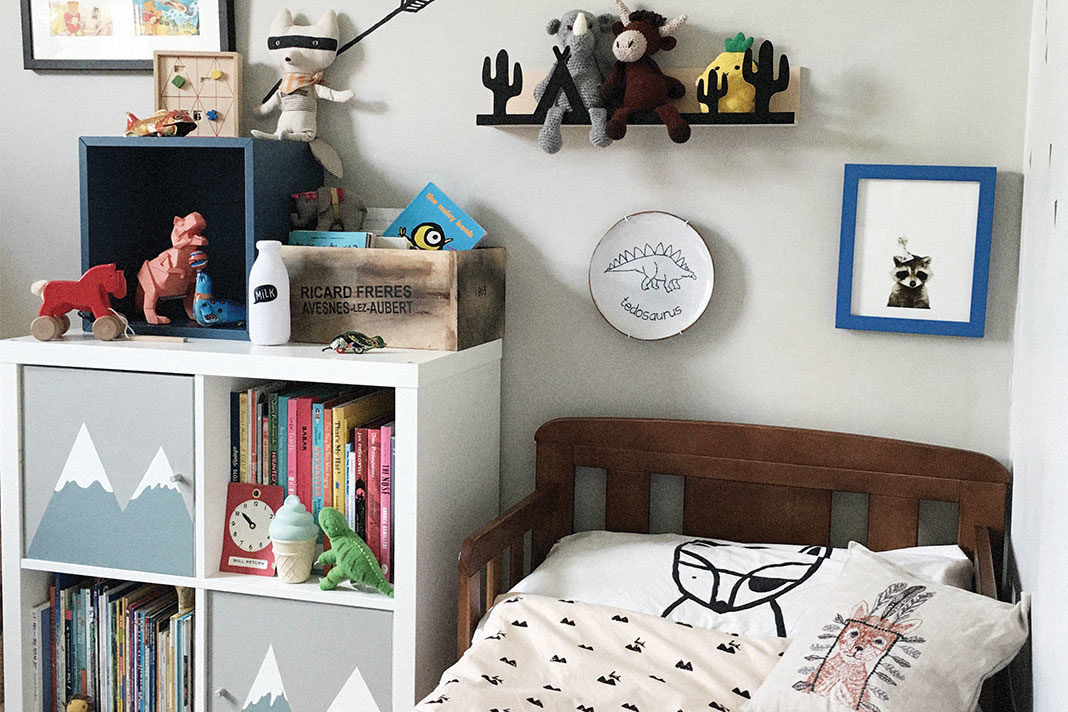 When this interiors blogger needed to design a room for her son, she was aiming for innocence and fun. Here’s her journey into children’s design…

Combining a design that has both joyfulness and the things that your toddler loves can be something of a challenge when you like your style without a heavy dose of plastic attached. Teds room has been gently evolving since we moved in 18 months ago. His was the first room we painted (within a fortnight) thanks to the harsh and bright lime green space he’d inherited (see what happens when you let your beloved little person make all the design decisions?!) So we neutralised the space with one of my very favourite greys, Farrow & Ball’s Cornforth White, which I’ve now used in three homes and loved the result each time, is such a perfect colour. It’s a shade of grey with just a hint of dirt in it, which may sound derogatory but in fact it makes the tone really natural and beautiful. Farrow & Ball describe it as a hushed, calming colour and it is a part of their Easy Neutrals range. I would particularly recommend it in north-facing rooms, which is where we’ve always used it, as it brings out the grey tones so beautifully.

I have accumulated quite a bit of Scandi kids stuff since Ted was born, and also a fairly hefty dinosaur and animal collection, so they were the jump points for thinking about how the room may hold together. But it wasn’t until I went on a trip down to Dorset for the Farrow & Ball wallpaper launch last winter that I knew exactly how the room would look. When I saw Gable unveiled it was a children’s design-adrenaline moment for me and there was no question in my mind that this was the right design for Ted’s room. With its charming bucolic rural scene, one that I would happily live with in my own space (perhaps in pink) there’s no design I can think of that’s more joyful or comforting for a bedroom. It has such a cosy feel to it, based on a 1950s design but quite timeless, with a touch of naivety to it. We talk about it often during winding down time in here, Ted really likes the animals and will spend ages spotting and counting them. The wallpaper is such a statement I didn’t want the design of the rest of the room to argue with it so I’ve kept everything else pretty pared back in monochromes with the odd flash or colour or fun.

Unlike the rest of the Design Soda house, I didn’t want the space to be too knowing or kitsch so it’s just innocence and fun in here. A mix between vintage wood and Scandinavian toys that I bought when he was really tiny and more colourful fun pieces that I’ve updated in the room as he gets older.

There are so many things that Ted loves (plastic aside) that we don’t have any theme in here at all, though at a push there is probably quite a hefty animal slant. The biggest statement (after the wallpaper) in this children’s design is the central back wall which has had things that we like thrown upon it pretty randomly. But I think it works, the cacti wall hooks and shelf were my decision but a lot of the pictures have meaning, the vintage Super Ted covers were framed for Ted by my good friend Lucy, there’s a handmade ceramic dinosaur plate called Tedosaurus from Aunty Kathryn, a print in vintage style by children’s illustrator Paul Thulby and a raccoon above Teds pillow that I couldn’t resist putting a party hat on.

I’ve tried to keep a pretty retro feel to the items on the mantelpiece, simplicity in wood and a few more colourful pieces which really pop against the wallpaper. There’s a bit of a vintage theme going on in this children’s design. The corner that holds Ted’s chest of drawers too, the yellow corner with the old £10 drawers I found on EBay and painted a bright mustard yellow, some vintage children’s books, the fifties style swinging rocket toy and the retro dressed animal plates from West Elm that people always comment on. With my ever growing love for house plants, Ted has an aloe which is good for cleansing the air and a mini terrarium complete with polar bear figurine.