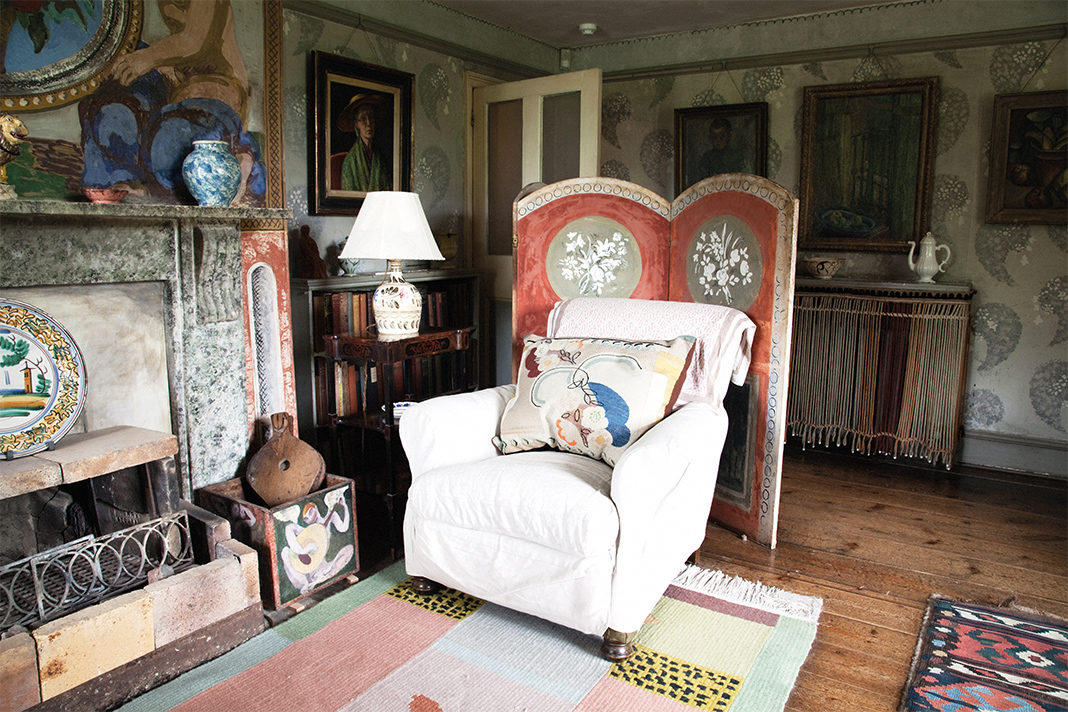 When Vanessa Bell and her Bloomsbury group moved to Charleston farmhouse in East Sussex, they weren’t to know it would become a design destination…

Charleston became the home of Bloomsbury set member Vanessa Bell and her lover Duncan Grant. They made the house into a collection of beautiful interiors and artwork. Today visitors flock to see the rare imagination that epitomised the work of the Bloomsbury Group. A set of British artists, writers and bohemians who changed country house style and interiors.

A History of Charleston

Vanessa, Grant and his lover David Garnett arrived at Charleston in 1916. Vanessa’s two sons by her husband Clive Bell joined them. They were conscientious objectors and wanted to escape the horrors of World War 1. They wanted to create a liberal idyll sheltered from polite society. But Grant and Garnett needed to find jobs to avoid arrest for their conscientious objection.

The two men found work at a local farm – roles that left them with ample time for their  creative endeavours. The fact that Bell’s sister, writer Virginia Woolf, lived nearby made the house an obvious choice. It was Woolf who first noticed Charleston was available to rent, writing to Bell that “the house wants doing up – and the wallpapers are awful. But it sounds a most attractive place.”

As soon as this odd trio arrived at Charleston they began redecorating the house. They tore down the wallpapers and painted motifs onto the walls and daubed ample nudes onto the fireplaces.

Bell and Grant invited their friends to stay at Charleston. Many spent long amounts of time at the farmhouse. The most notable of these was the painter and critic Roger Fry, who had had an affair with Bell before she met Grant.

Fry’s interest in post-Impressionism translated itself into bold and unusual designs. Fry founded the Omega Workshop along with Bell and Grant. They believed that artists should be in charge of their own commercial fortunes.

The furniture in Charleston came from Omega Workshops. They were as decorative as they were functional. The products were high quality. But they were expensive and too esoteric for the average home. At Charleston they remain a testament to Fry’s complex visual imagination.

Visitors to Charleston will notice the eclectic colours that decorate the rooms. From the Fry-designed studio to the murals and hand-drawn stencils. The emphasis was on replacing the drab Edwardian conformity with a vivid and bold imagination. It was a far cry from the ‘awful’ wallpaper that Virginia Woolf first mentioned.

The house remains a living testament to the artistic imagination of the Bloomsbury set. The  multicoloured rooms would have been a disaster in the hands of less tasteful artists. The fact it works at Charleston is an example of the lightness of touch Bell and Grant possessed.

Charleston became one of the most sought-after destinations in England. Notable guests included TS Eliot and EM Forster. Despite the years that have passed, the eccentric design that defined Charleston has endured. Their son Quentin even turned a laundry room into a pottery studio in 1939.

Charleston is open to the public. Allowing new generations of art lovers to take inspiration from the farmhouse. The Charleston Festival takes place yearly and welcomes artists and writers. This year included appearances from Hermione Lee and Vanessa Redgrave among a host of others. Should the Bloomsbury set glimpse the goings on in their former idyll, they would, doubtless, feel that the spirit of Charleston lives on.

Why It’s Worth Investing in Your Shutters