Home Travel Europe Is This Italy’s Most Glamorous Island? 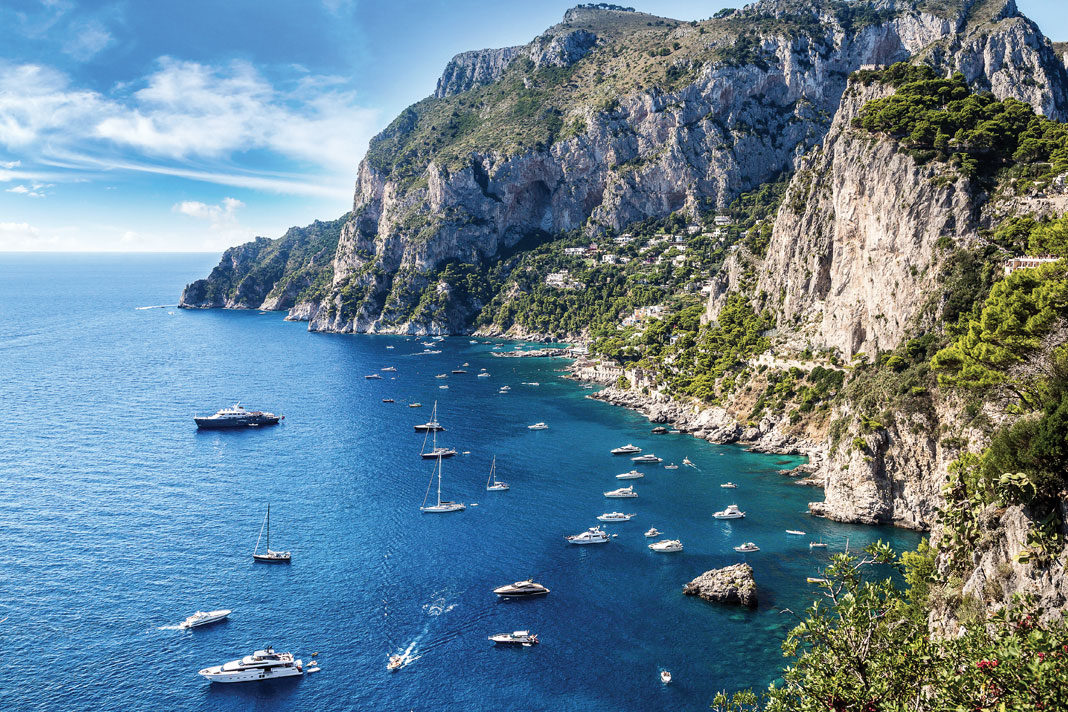 Get away from it all at Punta Tragara on Capri, Italy’s most glamorous island

The Isle of Capri is a legendary jewel in the Bay of Naples and has been known as a luxury retreat since the Roman emperor Tiberias took up residence there two thousand years ago. The beauty of this rocky outcrop, with its towering cliff above the busy port of Marina Grande, is just as alluring today, while the five-and-a-half star Punta Tragara hotel, perched high above the port and reached by a funicular, is just as luxurious, if not quite as decadent.

Punta Tragara’s service is attentive but discreet, as we see from the moment we are greeted on disembarking and our luggage is whisked away. From the top of the funicular the hotel is reached via the pedestrianized Piazzetta, or little square, then a wide street, where traditional shops give way to luxury boutiques. The hotel itself has extensive grounds, full of trees which are alive with the sound of birdsong. We feel very privileged and far from the touristic throng. 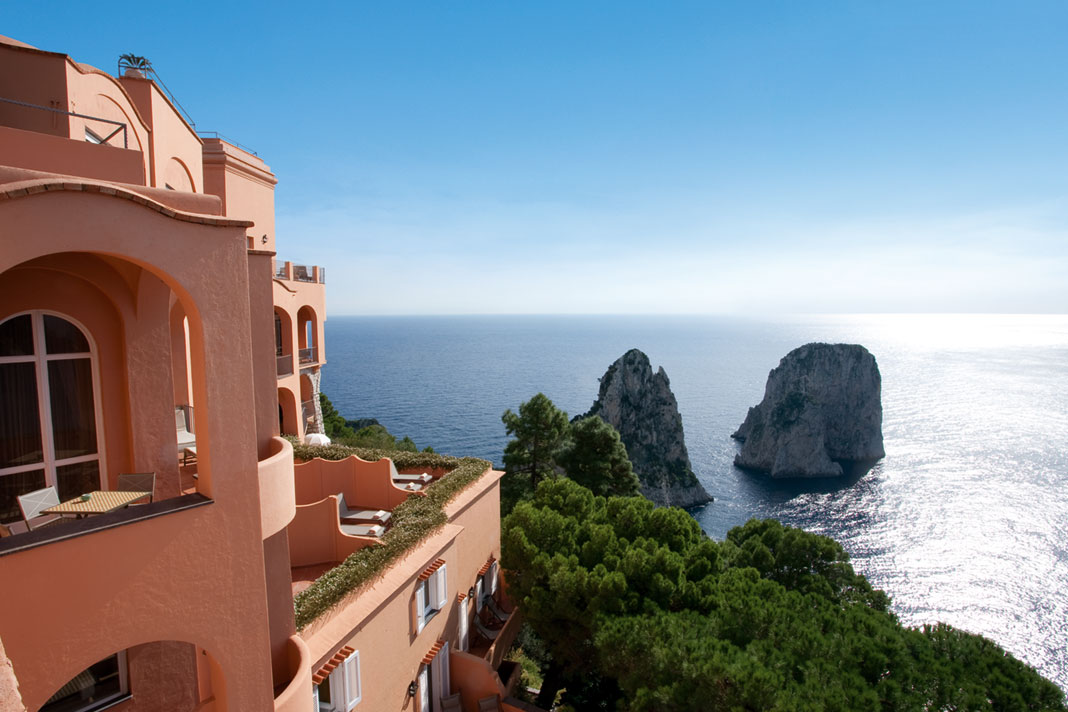 Built as a private villa in the 1920s from original plans by the architect Le Corbusier it became a hotel in the 1970s. Once home to the aristocratic Manfredi family it was also chosen as a base by both Churchill and Eisenhower. Its position is dramatic, its terracotta buildings seeming to almost balance on a tip of the island, while the garden is designed to offer many secret twists and turns, quiet meeting places and stunning vistas down over dark green pines to the sparkling waters of the bay.

The interior of the lobby is opulent, with high ceilings, marble floors and huge chandeliers, with decorative textiles marrying a heritage of art and fashion. The rooms are as opulent as the lobby promises, spacious and comfortable, and mine has a terrace looking out towards the stunning Faraglioni cliffs and the sea. It is secluded and serene, yet we can just hear the song of a nonna, a grandmother, selling granita limone, in the Piazzetta, fifteen minutes walk away. 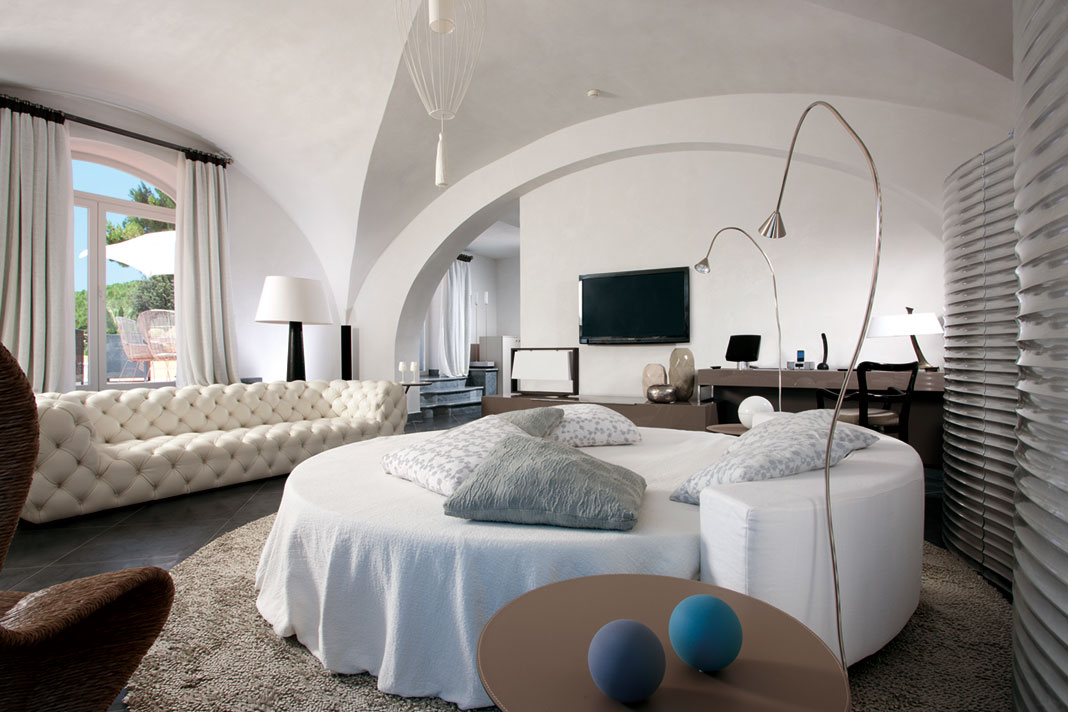 In the hotel’s main restaurant Monzu you can chose to eat in a smaller inside area or on larger table on the terrace above the illuminated pool. The seven- course tasting menu majors on elegantly presented seafood – squid, prawns, lobster–followed by pork Caprisian style. Wonderful fresh bread and carefully chosen white and especially stunning red wines, not to mention a menu of different mineral waters, make it a memorable experience. But it is served in a friendly manner and we were pleased to be greeted warmly by the same waiter at an equally delicious breakfast, highlights being a fresh ricotta cheese, which I could not resist, and prosecco with the coffee, which I did manage to refuse. 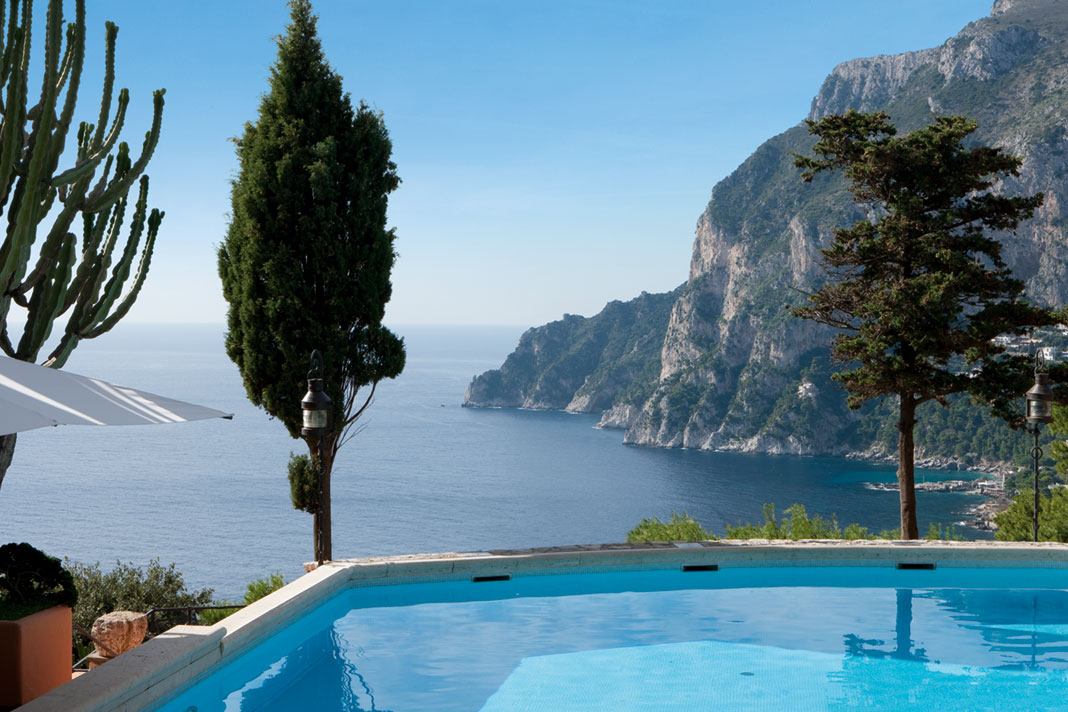 After so much indulgence it was time to explore and October, late in the season, is perfect for walking, as it is cooler and less busy. The hotel closes over the winter but spring is another very good time to visit. We set off along the Arco Naturale, a coastal walk which begins just outside the hotel. It takes you to a half collapsed grotto, the Arc, a feature of the limestone island. We see people embarking in boats heading for Capri’s most famous tourist attraction, the Blue Grotto, only accessible by sea, but after taking in the glamorous beach scene of La Fontelina, we prefer to walk on and enjoy nature and the views. Later we visited the town of Ana Capri and walked on to the Villa Jovis, where Tiberias himself had his palace and the less well known Villa Lysis where the French poet Count Jacques d’Adelswärd-Fersen lived with his lover, having exiled himself from Paris in 1903 after a scandal. 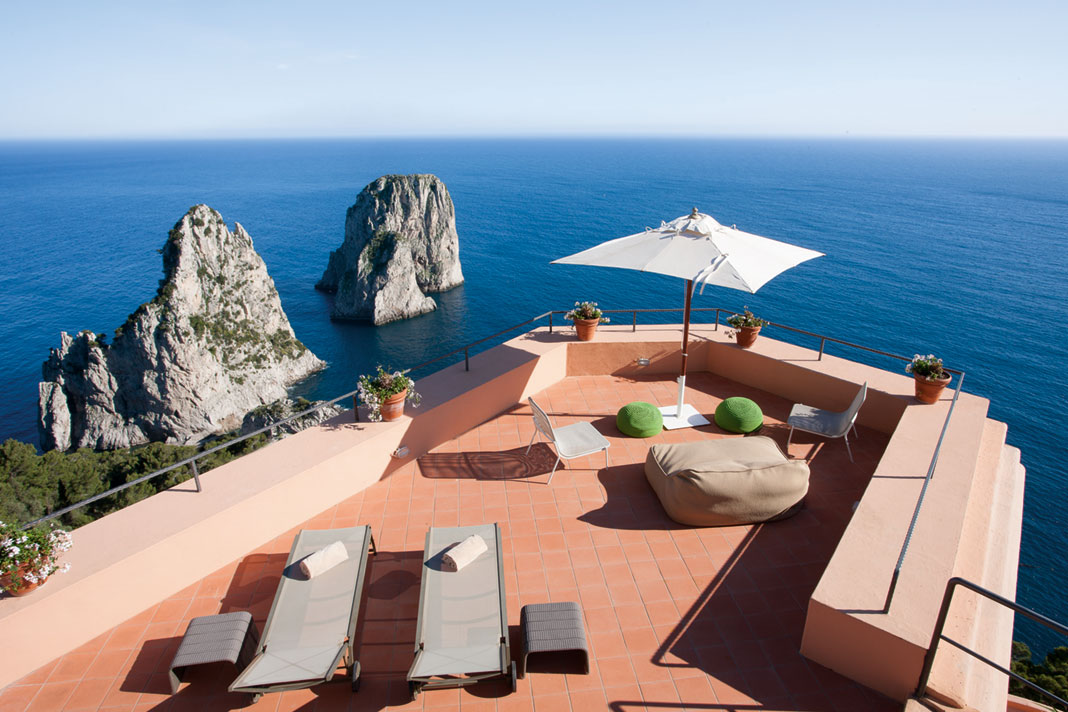 Back at the hotel it is warm enough for an early evening swim in one of the two pools – the amazing service includes being handed a huge fluffy towel as you get out of the water. Yet more indulgence can be found in the Unica Spa at the bottom of the hotel, which offers a host of PhysioLab treatments. I opted for an outstanding anti-aging facial.

Sadly before I could get totally spoilt it was time to leave. On my last morning I decided that a final spot of decadence was called for and tried the prosecco for breakfast, before the ferry back across the Bay of Naples away from a magical island and back to the bustle of city life.

Punta Tragara
Rooms available from €384 per room per night, based on two adults sharing a Prestige Bedroom on a B&B basis, including VAT and service charge. For further information and reservations, please visit hoteltragara.com or telephone +39 081 837 0844.