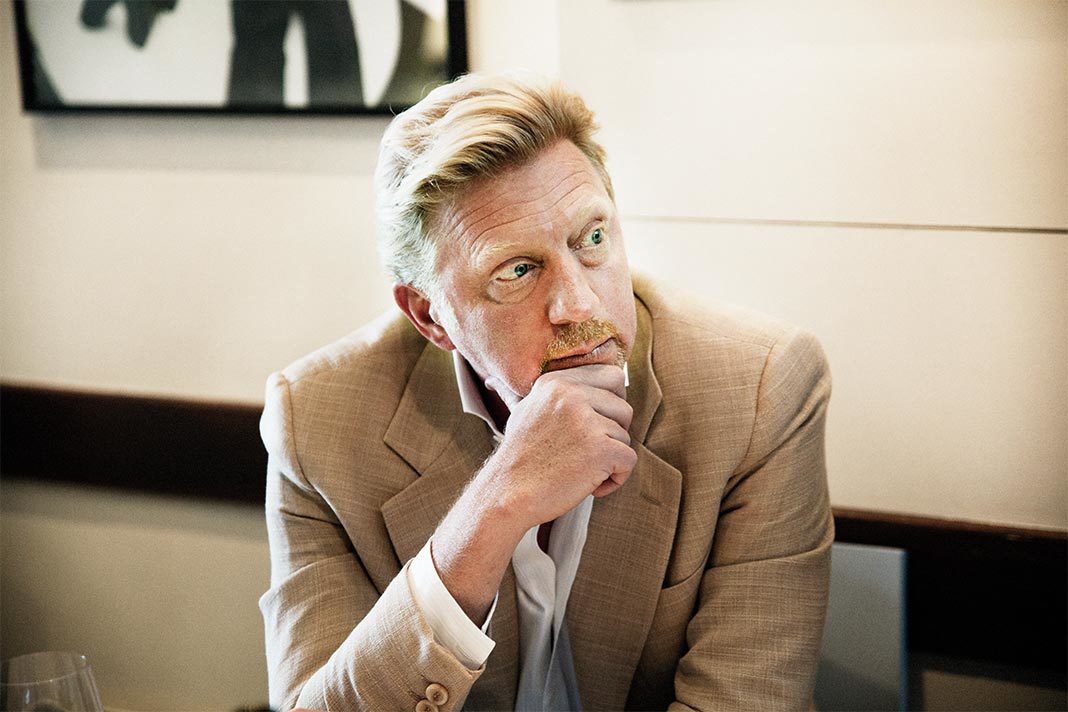 With Wimbledon fortnight around the corner, we catch up with Boris Becker and Annabel Croft at San Lorenzo to talk tennis, success and SW19

A 16-year-old Boris Becker was brought to San Lorenzo fresh from his success at Queen’s Club by tennis legend and coach, Ion Tiriac. He ordered a steak and pasta, followed by a lemon sorbet, and that became his pre-match ritual. It was what he ordered the night before his record-breaking singles victory in 1985. ‘That became my diet before every single match,’ Boris says, sitting now at a corner table in San Lorenzo Wimbledon over 30 years later with Annabel Croft.

Founded in 1969, San Lorenzo is as much a part of Wimbledon heritage as tennis whites, strawberries and Champagne. Stationed at the bottom of the hill in this charming borough, the up-market Italian boasts a list of diners that reads like the Wimbledon tournament leader board. Ghigo Berni and his brother Paolo – sons of Lorenzo and Mara Berni of the legendary San Lorenzo in Beauchamp Place – have fed just about every tennis champion of the past five decades.

Andre Agassi had the local mothers of Wimbledon fawning over him as he dined and Martina Navratilova hosted her retirement party here. Stan Smith comes here to eat and his picture hangs on the wall. Last year, the place was frequented by Maria Sharapova and the Williams sisters, to name just a few.

The floors are tiled with cream slabs and the walls hung with quirky and considered art. Alongside Stan Smith are black and white shots of Nastase and Adriano Panatta. Beyond the bar is a second, quieter dining room and outside an al fresco area. We’re here with restaurant owner Ghigo and Annabel Croft – former British number one tennis player, presenter and frequent visitor to San Lorenzo. The three share an affectionate friendship that dates back to Boris and Annabel’s playing days.

Tennis stars these days are arguably fitter than ever, thanks to fierce coaches and stricter diets, but what was impressive about the players of the young Tiriac generation was their ability to perform exceptionally on court whilst maintaining a spirited social life off it. Annabel and Boris reminisce fondly on Wednesday nights spent at China White and dinners-turned-discos at Tramp.

‘I remember seeing Boris, hobbling around on crutches,’ Annabel recalls. ‘He was 16 and beating Bill Scanlon on court two, but he’d sprained his ankle. I remember going to a nightclub and he was there on his crutches,’ she says.

‘It was an era when players were much more photographed,’ Ghigo tells us. ‘We would have paparazzi here all the time, especially for people like Gabriela Sabatini and Annabel. I remember those days really fondly.’

It was during this time – when Boris was here pretty much every night, at the same table – that he met Ghigo and his family.  ‘We’re talking 32-33 years ago. I don’t think I’ve eaten more food out of any other restaurant in the world,’ Boris says. Ghigo’s parents are the godparents of Boris’ children and there is even a pizza named after his son, Noah.

THE INNOCENCE OF YOUTH

Boris’ generation was the last to really enjoy a decent dinner and drink after knocking a few balls about on the court. ‘We underestimate – especially the top players – how much pressure they are under now,’ he says. ‘They’re all part of a bigger picture and that is the entertainment industry. You have kids and young adults watching – impressionable people – and the players become role models even though they don’t want to be,’ he explains. So did he realise the magnitude of what he’d achieved at the time? Not at all; he believes ‘it was the innocence of youth.

It was the mid 80’s and sports didn’t really exist in Germany at the time, with the exception of a few footballers.’ When he hit that last brutal serve against Kevin Curren to lift the Wimbledon title, he became part of championship folklore.

We look back now and see that of course he was always going to do well. Playing abilities aside, he had the mentality to completely disengage with outside pressures when on the court. ‘I think it’s one of the harshest sports in terms of psychology, because you can’t really prepare for it,’ Annabel says.

Boris credits Tiriac for this winning sports mindset.  ‘He would say the purpose of today is to win the match. So what do we have to do today to win the match?’ Boris recalls. This strength of mind is the mark of a great player. Boris believes it’s part of the battle; ‘You don’t win a tennis match just by hitting the ball,’ he says. ‘As a coach, I thought it was important to practise a lot, but I rated the match mentality much higher,’ he continues.

This was certainly evident during his stint with Djokovic. After crashing out of the French Open final, Djokovic went on to lift the Wimbledon trophy under the guidance of Boris. ‘It’s how you react and deal with certain situations that counts,’ he tells us, ‘It’s not what you do on the practise court, it’s what you do in the match.’

Boris now lives in Wimbledon and his career has turned full circle. This year we’ll see him commentating at the tournament again. And as for coaching, will we see him return to the sidelines? ‘I wouldn’t rule it out, a few players have asked me – both male and female,’ he says. ‘Coaching is a very time consuming commitment though. I’m on standby for my family, but you also have to be on standby for the players,’ he explains. For him, the ‘weekend is the weekend’ which he enjoys at the home he has made here in Wimbledon, still eating three times a week at San Lorenzo.

It’s easy to see why he, Annabel and so many tennis greats have developed such a fondness for the place. It has the alluring charm of an authentic Italian trattoria and with food to match. As a mecca for the tennis world, and with the Wimbledon fortnight on the horizon, this iconic eatery will always be an inherent aspect of Wimbledon’s heritage.