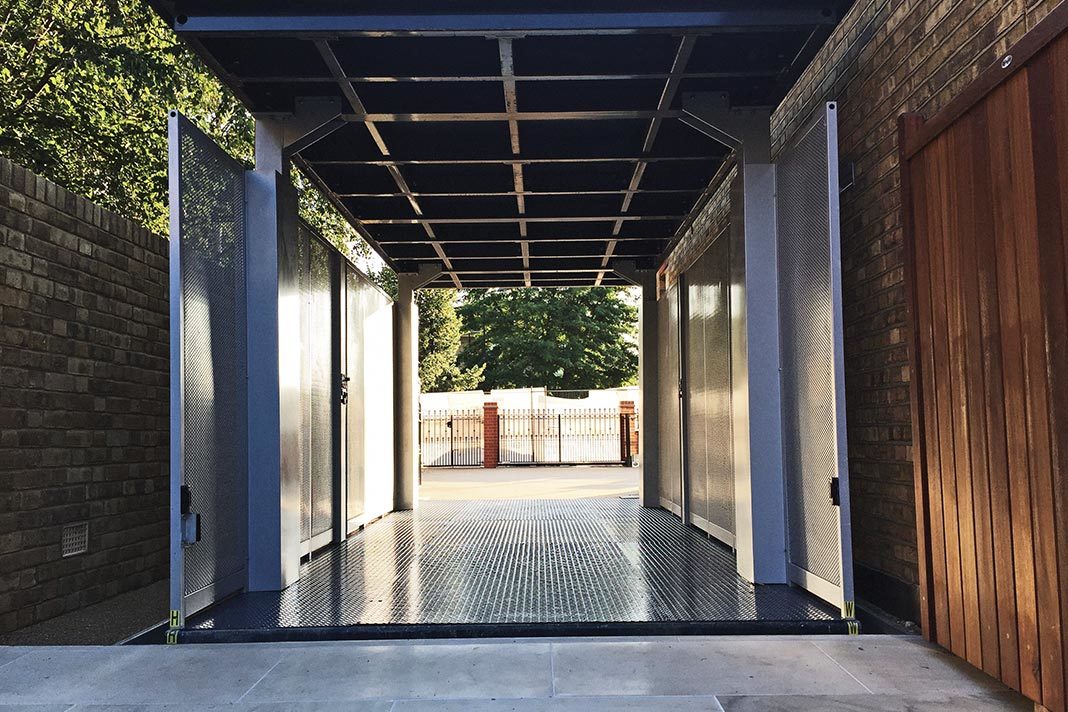 Fed up with parking on the street but have a home with only a small driveway - then how about using a car lift to store your motors?

If you live in London and drive a car, then you’ll be adept at dodging the capital’s army of parking attendants who pound the streets looking for errant vehicles come rain or shine. It can be an expensive game of cat and mouse; in the Royal Borough of Kensington and Chelsea, for example, tickets range from £80 to £130, or half that if you pay within 14 days. But if you’re clamped then the borough charges £70 to release the clamp on top of the fine, and £200 plus the fine if you’re towed away.

Every year four million tickets or nearly 11,000 every day are issued by London boroughs, helping to raise over half a billion pounds from their on- and off-street operations. Westminster tops the parking league with profits of £46.4 million during 2014/15 from on-street parking enforcement followed by Kensington and Chelsea (£33 million), Camden (£24.5 million), Hammersmith & Fulham (£23.8 million) and Wandsworth (£20.4 million). And then there are residential parking permits, which can run to several hundred pounds a year if you have two cars. For example, Westminster City Council charges £141 per vehicle a year for cars with engines over 1.2 litres. And even then, you’re not guaranteed a space.

Most London homeowners who have off-street parking space next to their homes, therefore, cherish their ticket and permit-free lives, and this in part explains why off-street parking places are so expensive. A double garage in Chelsea recently sold for a record-breaking £670,000 last year. For those who can afford it, there is another way to park your car away from prying attendants or thieves. And that means going underground.

Demand for basement parking spaces has been increasing recently as the trend for ‘iceberg’ homes has ramped up, driven by planning laws that don’t allow properties to be redeveloped upwards, and so there’s only one place to go to create space; down.

“We find a lot of our clients in certain parts of London are car collectors who treat their vehicles as investments as well as transport, so they need to store them somewhere,” says David Grade of Total Lifting Solutions. “In the past, they would keep their cars in secure storage facilities outside London, but it’s a pain for them if they want to drive the cars because they then have to be transported into their London address when they want to use them.”

David says his company is the leading supplier in the UK of car platform lifts, which enable home owners to have a basement car park even though space around the side, back or front of their property is tight. Hi lifts are essentially vertical pits the size of a small swimming pool dug into the ground usually up to 3.5 metres deep that use scissor-like lifting arms to raise and lower a platform above and below ground level.These platforms have a ‘roof’ which, when the lift goes down, creates a flat surface above which if carefully designed, is invisible to the casual eye. David says his company’s standard Marte CT platform is a 2.5m wide by a 5.3m plate that can take a car of up to three tonnes, which means it can handle most large vehicles from a Range Rover to a luxury Lamborghini sports car.

One of the biggest concerns is vibration and noise – every time you lower or raise your cars out of the garage the whole house can grind and groan unless you get your platform tech spec right. The question is – do you choose a ‘scissor system’ or a ‘four-post system’? The former uses one or two sets of hydraulic scissors to raise the platform, which creates the least vibration and noise whereas a four post system is noisier and creates more vibration. These systems are also used in car showrooms, so if you want to see one in action then pop along to one of London’s luxury roadside Ferrari or BMW showrooms, who use David’s lifts to create extra space in the showrooms as well as the spectacle of a car ‘in the air’. And you could add to your collection while you’re there.