Home Travel Ibiza to Barcelona: We Discover Both on a Whirlwind Trip to Spain 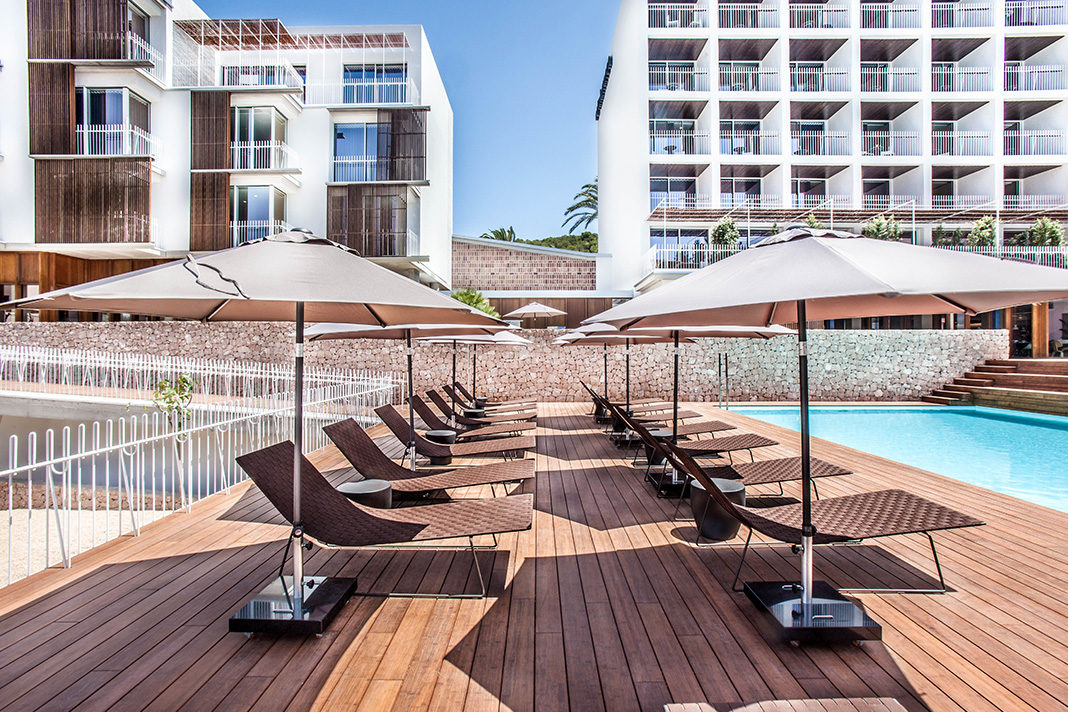 The OD Hotels in Barcelona and Ibiza offer the perfect mix of culture and fun. We discover both on a whirlwind weekend in Spain

With increasingly busy lives, it can be hard just to hop on to the next flight to the Caribbean. For those craving Vitamin D in ever-unpredictable England, Europe can seem like a far more attractive option. And where better to indulge that long weekend-in-the-sun craving than Spain – home of Rioja (the wine and the region, but mostly the wine), tapas and siestas? For the busiest among us, this is an opportunity to fit everything in; both ‘party’ and ‘culture’, and we have a proposal, so hear us out…

Fly to Barcelona to sate your cultural desires. A mere two hours on the plane, it’s the home of Gaudi, the famous La Rambla, and the medieval Old Town – in short, it can provide everything you could wish for culturally speaking. After an abundance of sightseeing, it’s important to get your fill of comfort and luxury, too, and that’s where OD Hotel Barcelona steps in. Located close enough to the action to avoid feelings of isolation, yet away from the bustling ‘touristy’ areas, it’s a safe and peaceful haven where you can fully relax after a long day. 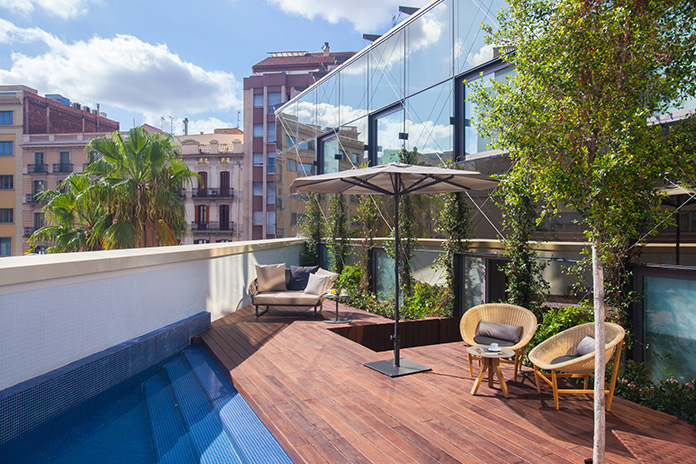 The reception area is both cool and clean, and helpful staff are on hand at all hours to make your life as comfortable as possible, whether it be lunch on the sunny decked terrace outside or in the open plan restaurant that serves local Catalonian delicacies such as Iberian ham and succulent anchovies. A bar in the reception area on the level below the restaurant also serves expertly mixed cocktails for fuel if you’re keeping up with Spanish traditions and eating at bedtime – but an earlier dining time is also an option.

We recommend fitting the culture into the morning in order to make the most of the spectacular roof terrace and bar, which provides views over the rooftops of Barcelona. There’s even an option to swim, with a tiny pool jutting out in the corner.

The rooms are spacious and minimalist, although they include the thoughtful touches of an instinctively luxurious hotel: bars of chocolate on the bed, a thoroughly stocked mini bar and free bottles of water. The approach to bathrooms seems initially off-putting – merging with the room with no walls, but somehow it doesn’t seem to be an invasion of privacy and both the shower and the loo have doors. 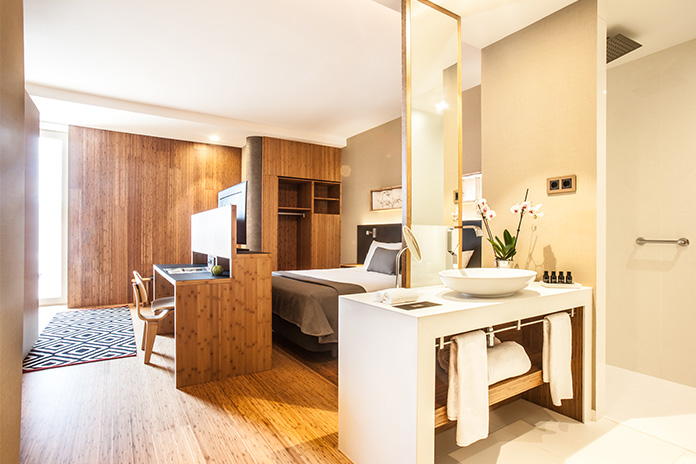 If you value privacy, then the Grand Suite drips luxury, offering your own Nespresso machine, a private pool, terrace and a seating area with views over the centre of the city. A regular suite boasts all of the same, except the terrace and pool. Whatever you choose, whether it’s a suite or a regular room, you are guaranteed a great nights sleep in their enormous beds, exemplary service from the OD Team and excellent food.

Here’s where it sounds complicated in theory, but the reality couldn’t be easier. Take a transfer to Ibiza, just under an hour away by plane, for the party and relaxation part of your holiday. An island made up entirely of contrasts, there’s the party aspect to the island but there’s also orange groves, mountains and an Old Town for maximum relaxation.

For a bit of stability and continuity, plus, dare I say it, a tad more glamour than its Barcelona counterpart, the OD Talamanca, located just off its famous namesake beach, is yet another safe haven away from the full-blown party atmosphere.

It is obviously built for comfort. Opening for its first full season this April, its creators have clearly taken the problems of the island and addressed them one by one. They have to hand a fleet of smart cars for quick access to the heart of the island – there’s a shortage of taxis in Ibiza. They’ve included a giant eighty garage parking spaces for those that choose to rent their own – there’s also a shortage of parking spaces. The interiors are chic and again, minimal. Like Barcelona, there’s a bar in the reception area and a fully equipped restaurant, but there are also three pools: a party orientated one, one good for kids, and one for the more serious executives. 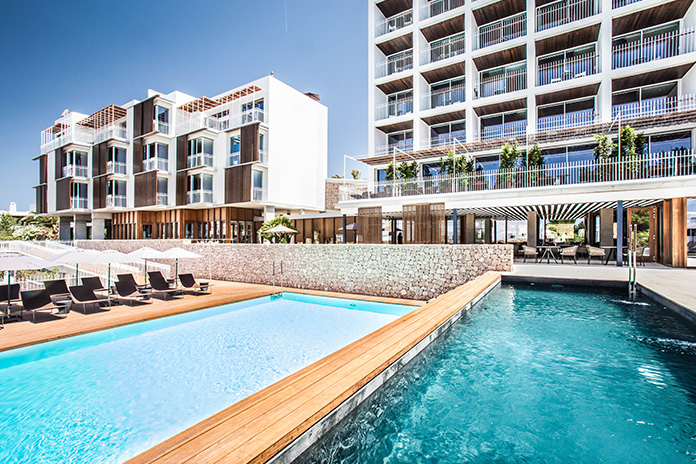 The rooms are very similar to those in Barcelona, minimal with huge beds and a balcony that looks over the pool and the sea: a feature that every room has due to the design of the hotel. Every room boasts views over the Old Town and the alluring super-yachts. A fruit platter and bottle of cava is laid out to greet the guests, and lest you forget you’re in Ibiza, bottles of tequila and vodka are in pride of place next to the door.

For eating out, the hotel is within walking distance of one of the most romantic restaurants in Ibiza, Sa Punta, offering black cod, sushi and whole roast chickens amongst so much more. Even the walk to the restaurant alongside the sea is glorious. This is not to discount the food at the hotel itself. The breakfast spread is quite something to behold, with as many types of bread you could think of and a cereal bar for the more health conscious. There’s also the option of a hot breakfast, which spans from eggs benedict to chorizo. Breakfast is served until 12, so it’s possible to party until dawn and still have something to eat in the morning. 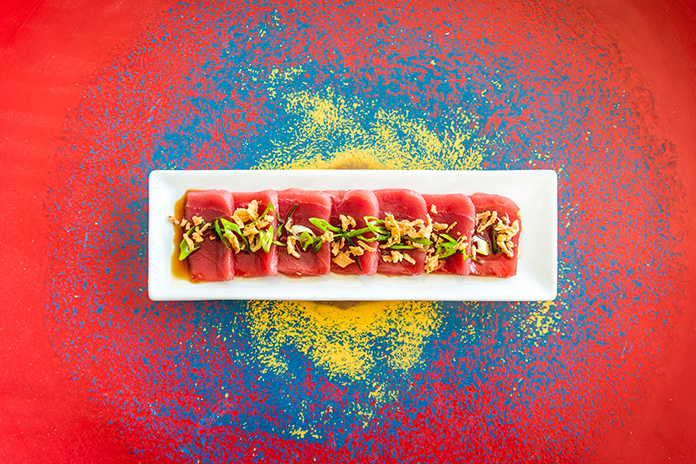 For days where you may be feeling somewhat worse for wear, sitting by the pool may seem an attractive option but opening soon is the OD Talamanca Skybar, providing spectacular views over the bay, the Old Town and the party district – so beautiful it may well encourage you to keep going. Again, the hotel has the option of expansive suites, the largest of which has two stories, a kitchenette, living room and dining room.

All in all, for a long weekend, it’s the perfect balance between party and culture, though how long you give to each is up to you. Or, if you fancy extending your stay, OD Hotels are located all over Spain, and you probably won’t find a more luxurious way to end your day in such a beautiful country.